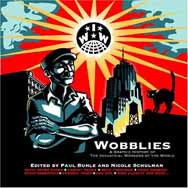 The Industrial Workers of the World, celebrating their centenary this year (see Paul Buhle, “The Legacy of the IWW,” Monthly Review, June 2005), could not play a major role in labor or the Left after the middle 1920s,  but their influence continued (and continues) to be felt in many curious ways. To take an often forgotten example: No other movement ever gave quite so much attention to the processes of work and those who did it. The dramatically changing nature of industrial labor and the workforce, in the first two decades of the twentieth century, set the context. But the Wobs and their favorite magazine, the International Socialist Review from Chicago, devoted attention not only to the ongoing loss of skills and autonomy (a frequent source of commentary, MR’s Harry Braverman, was one of the keenest authors in the late decades of the century) but to the struggle for a different and more collective kind of autonomy by the workers pretty much at the bottom.

Singlejack Solidarity (University of Minnesota Press, 2004), a posthumous selection of Stan Weir’s essays edited by George Lipsitz (and with a Foreword by Norm Diamond), brings the key Wobbly issues back to mind, and puts a face on them.  It is, in many ways, the face of Weir himself, a factory militant and socialist but most often an outsider, trying to work out difficult problems through conversations with ordinary folks and a large circle of friends.

That I was, for an extended time, one of those friends, brings me consolation at my losing touch with Stan. His very fixed views on many subjects had been set within the context of the 1940s, his early political days, with events like the Oakland General Strike that remained, for him, the working-class explosion of energy that he always expected to see again. His section of the Trotskyist movement viewed the Soviet Union as not only distorted socialism, but doomed. The Popular Front whose culture was a vibrant center of the most hopeful section of American life in the Roosevelt years (and long after, with most hopes gone), turned him off. Eventually he dropped Leninism or the Vanguard Party in all its varieties, but he had nowhere else, in an organizational sense, to go.

So Stan was a kind of cosmos in himself. A college dropout, he became a merchant seaman, autoworker, longshoreman, college instructor (actually, his job was to create seminars for union locals in Illinois), small press publisher, and a variety of other things. He collected ideas and people. There is no summarizing a book like Singlejack Solidarity in a short review, and I will not attempt to do so. What I want to note is that it is loaded, all along the way, with insights about the failure of business unionism.

Here comes the Wobbliness. I’m not at all sure that Stan thought about his insights that way, even though he clearly recognized the kinship. The pre-1920 world of radical dreamers was effectively shut off from radicals of almost every variety afterward, viewed as impractical and utopian. But it is precisely this curious kind of utopia that impelled Weir to take up questions like the resistance to automation, when at so many times and places what existing unions sought to do was to soften the blows and secure as much for the fading workforce as possible.

Stan had something very different in mind: the regeneration of informal work groups at job sites of every kind, making contact with their counterparts across all occupational lines, and then making decisions to be relayed to boss and politician. It doesn’t happen very often, even in semi-revolutionary situations. But it had the kind of anti-bureaucratic spirit and involvement that might overcome what we might call a working-class withdrawal from political expectations — in the failure alike of Communism and social democracy — almost everywhere in the world.

It was never entirely convincing, even as an intellectual argument, and too frequently tied up with old wounds he had suffered. But it had the great virtue of a conversational gambit, in less insurrectionary terms, with workers of every kind who he knew on a daily basis, wherever he lived; and with intellectuals willing to listen.

Readers of Singlejack Solidarity will not likely find it a wholly satisfying book, selected from assorted essays, some ideas more complete than others. But it presents Stan Weir the working thinker and unique revolutionary as nothing else can.

Paul Buhle is coeditor of The Encyclopedia of the American Left, whose third edition will be published digitally and later in print by Verso Books, in cooperation with the Democratic Socialists of America. His most recent book is the nonfiction graphic novel of Paul Robeson's life, Ballad of an American (2020), illustrated by Sharon Rudahl. Buhle has been a contributor to Monthly Review since the 1970s.