General Electric (GE) commercials have always aimed to present a calm, peaceful world that (they imply) the company’s technological ingenuity helps make possible. After all, they “bring good things to life.” As environmental degradation continues to expand in tandem with global capitalism, environmental consciousness becomes a new marketing strategy. GE’s newest invention is to present itself as an environmental crusader. 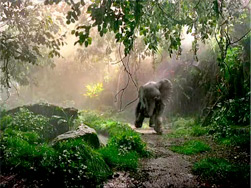 “Ecomagination” is its latest moniker, proclaiming that one of the world’s largest corporations has gone green, embracing environmentally-friendly policies and promising to provide the world with solutions to environmental problems.  All we have to do is trust the company and continue our lives, preferably as its customers, and it will bring us the clean, pure world shown in its advertisements.

GE prides itself on providing over 125 years of service to customers. Its mantra, following Thomas Edison, is that it “finds out what the world needs” and “proceeds to invent it.” (Mind you, profits are simply a byproduct of its benevolence.) The mantra serves to paint it as a responsible company in the service of humanity.  (Think of it as a gentle giant.)  But if we strip away its public relations cloak, we gain a completely different picture of GE and what it brings to the world.

In Deadly Deception: General Electric, Nuclear Weapons & Our Environment, the 1991 Academy Award winner for Best Short Documentary, GE’s true corporate legacy is revealed.  Here is the corporation that made plutonium for the United States government; deliberately released radioactive materials into the air, creating a huge environmental disaster zone; and falsified asbestos exposure records in regards to their workers. Hanford, in Washington state, is an enormous nuclear facility that GE operated.  Here, it knowingly released extensive amounts of radioactive materials into the water and air. In fact, in 1949, it conducted classified experiments which involved the intentional release of radioactive materials (500 times the radioactivity of Three Mile Island) into the air. At times, the region experienced higher doses of radioactivity than Chernobyl.

The toxic legacy of GE left 27 of 28 families along the “death mile” with cancers or babies with birth defects (no eyes, no skull, etc.), farm animals grossly deformed, and the