Anyone interested in politics should at least occasionally read what
Right-Wing Think Tanks (RWTTs) are proposing, for what they advocate
shows up as Administration policies. Reading the RWTTs enables us to identify and respond to the same ideas that eventually trickle out of
the mouths of Administration spokespeople.

Right-Wing Think Tanks want to eliminate the minimum wage. RWTTs
arguments against the minium wage often mention studies and their
findings, but rarely provide sufficient information to track down and
assess them. Below are some of the most common arguments made by RWTTs.

Common Arguments Against the Minimum Wage

But even if these claims were true — and they are not* —
the minimum wage
affects more than those paid it. Raising the minimum wage has a ripple
effect, increasing the wages of those paid slightly above minimum. A
useful source for data on the minimum wage is Economic Policy
Institute’s “Minimum
Wage: Facts at a Glance.”

2. The minimum wage is anti-poor people. Some argue the minimum
wage increases unemployment, and unemployment is worse than poverty
wages. If an employer could pay whatever it wanted, it would pay less
but hire more workers. 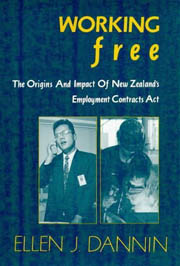 But while this seems plausible, it is just as likely that the
employer would keep the same number of workers and pocket the rest as
profit. It is also important to realize that poverty debases people and
makes them desperate. In New Zealand, in the early 1990’s when official
unemployment was above 13%, employers who offered no-wage, experience-only
jobs were rewarded with hundreds of desperate applicants hoping that if they showed
themselves to be eager, they would be hired for paying jobs. Their hopes were dashed. In the US, we have unofficial internships and students willing to take
unpaid work hoping for a real job. This was illegal in both New Zealand
and the US, yet it continues.

3. People are paid what they are worth.
4. People paid minimum wage don’t have the skills to compete and will
never get them, because they will never get their first paid job.

But are wages are really tightly tied to skills? A look at
the pay of airline CEOs shows this is a myth. There is some
relationship, but there is a lot of play in the system.

5. The minimum wage is the cause for higher black youth
unemployment.

But while it is touching that RWTTs are concerned about
minorities, they ignore racism as the more likely cause of their higher unemployment rates.

How the RWTTs Make Their Arguments

Here are some examples of how these arguments are actually made. Notice
both the arguments and the way they are made and supported.

The minimum wage is the cause for higher black youth unemployment.

The bias of minimum wage laws against disadvantaged
minorities has been conspicuous ever since 1956, when the minimum wage
shot up from 75 cents to $1.00 an hour. During the next two years,
nonwhite teenage unemployment spiralled from 14 to 24 percent. The
recent 1996 hike in the minimum wage to $5.15 an hour had a similar
effect: unemployment among black male teenagers jumped from 37 to 41
percent almost immediately, at a time when the economy was doing well
for almost everyone else. That’s why Milton Friedman, the Nobel Prize
winning economist, once called the minimum wage “the most anti-black law
on the books.”

The minimum wage is anti-poor people. It causes unemployment.

The working poor targeted by the minimum wage plan would now
have to compete for jobs not only against others willing to work for
minimum wage, but also against those with higher skills who are willing
to work for $8 an hour, $9 an hour, all the way up to the living wage. Thus, not only are they not making $100 an hour, they are making $0. While this may seem to be an extreme example, the principle is the same
for any “living wage” law; the results will simply take place on a
smaller scale. It is precisely the people who are trying to work their
way up in the world that are hurt the most by minimum and “living wage” laws.

Duke University researchers have found that after an
increase in the minimum wage, the lowest skilled adults are crowded out
of their jobs as better-educated teenagers (frequently from wealthier
families) are drawn into the workforce. Their “need”? Simply to earn
money for video games and iPods. But because they require less training,
employers eagerly hire these higher-skilled teenagers to get the most
out of their higher payroll costs.

Employers cannot simply pay any old wage that makes workers
happy. Businesses are constrained by the value that the workers add to
the firm. If a worker’s contribution to the firm is such that his output
brings in revenue of $5 for every hour of his output, the business
cannot afford to pay him any more than that and still break even. If he
is forced to pay this employee $7 an hour, he is losing $2 an hour every
hour that worker is employed. A minimum wage increase provides an
incentive to hand him the pink slip.

Source: Shawn Ritenour, “What You Need to
Know About the Minimum Wage,” Mises Institute (an Alabama RWTT). [A
similar piece by the same author is listed by Privatization.org, which
links to Reason?s website and this piece: Shawn Ritenour, “Give Lower-Skilled Workers a Chance.”]

The RWTTs anti-minimum wage propaganda is not just a US issue. It is of interest to right-wing
organizations around the world, as you can see at the Web site of the International Society for
Individual Liberty.

Now you have an introduction to what the RWTT arguments against the
minimum wage are and how they make their points. You have some brief
talking points to counter their arguments. Read “The Minimum Wage, Part Two” tomorrow for more powerful intellectual weapons against RWTT propaganda.

Ellen Dannin is Professor of Law at Wayne State University Law School. She is the author of Working Free: The Origins and Impact of New Zealand’s Employment Contracts Act (Auckland University Press, 1997) and many other publications. Her forthcoming book Taking Back the Workers’ Law: A Strategy for Values-based Labor Law Reforms will be published by Cornell University Press.