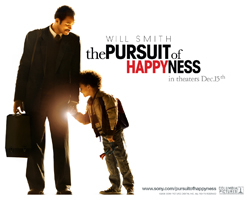 Most of The Pursuit of Happyness (Dir. Gabriele Muccino, 2006) is about hard times hitting a good, smart, and hard-working man.  As the result of bad luck, mistreatment, disloyalty of friends, low wages, and high costs of housing, Chris Gardner (played by Will Smith) and his young son wind up homeless.  The film is so unrelentingly painful that, if you didn’t know it has a happy ending, it would be almost too difficult to sit through.

Chris Gardner is the classic American hero — a super-human underdog who by grit and raw talent succeeds.  The measure of his success — and the happy ending — is that he sustains a warm father-son relationship under crushingly difficult circumstances . . . and becomes a rich man.

Most of us do not sympathize with homeless people.  In the film you see huge lines of people at homeless shelters with such low capacity that many — including Chris and his son — are turned away to spend the night . . . who knows where.  It’s not a mystery.  They will spend the night, huddled in doorways, riding public transportation to the terminus and back, and walking the streets to keep warm.

Those who do get into a shelter must obey the shelter regimen, which, with its lights out policy, makes it impossible to do anything useful in the evening.  So anyone who wanted to study would be out of luck.  Then, there is the problem of having to cart all your worldly possessions everywhere you go, because there is no place to store them.

These days we tend to see the poor as deserving what they get.  So why do we sympathize with and care deeply about Chris Gardner?  It may be because of his eventual success, which demonstrates that he is a “deserving” person.  Or we support his goal — to become a stockbroker — and the fact that he works so hard to achieve it.  Or we understand why he ends up on the streets, seeking refuge in a homeless shelter, so we sympathize with his plight and think: there but for the grace of God. . . .

While the film prompts us to root for Chris to succeed, it never leads us to consider whether other homeless people are more like Chris than not.  Maybe they too deserve better.  Maybe they too are homeless despite hard work.  Needless to say, the film never asks why we let so many people live in poverty and fall so easily into homelessness.

The film suggests that Chris Gardner is different than all other poor people.  We see them dressed in rags.  We see Chris dressed in a suit.

The difference, to be sure, has its rationale in the plot: Chris is homeless in part because he has bet his all on getting a job through the brutal competition of an unpaid internship program at Dean Witter.  The company gets a very hungry group, including Chris, who spend their time making call after call to drum up business without getting paid for their work, but the film presents it as a matter of fact, without even dropping a hint that perhaps an unpaid internship program is part of the problem.

Even though the film never asks questions, here are some we should: 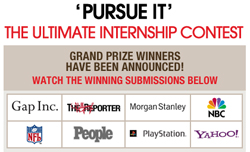 Why do we allow wealthy companies to offer “internships” that pay nothing?  Why doesn’t this violate minimum wage and overtime payment laws?  Until recently it was the norm for employers to pay workers and give on-the-job training.  What has changed?  The film’s Web site doesn’t question the rightness of Dean Witter’s no-pay, experience-only job.  Instead — get this — it hosts “The Ultimate Internship Contest.”

Why don’t we offer basic decent housing for everyone?  Consider how much better things would have gone for Chris — and his young son — had they at least had a small place — a clean studio apartment — where they could have stored their things and cooked their own food rather than having to pay for more expensive prepared food.

Why don’t we support even people in poverty who want to better themselves?  Our stereotype of the poor is the Welfare Queen,1 but the Chris Gardner story tells us that at least some people are working poor.  What does it say about our society’s values when even people who work full-time cannot lift themselves above the official poverty line?

In the film, a strong father-son bond stays intact.  What impact would the horrors of poverty, especially homelessness, have on such a young child in the real world?

Once we answer these questions, can we continue business as usual?

1   For those who want to see if the stereotype of the Welfare Queen actually fits the reality, let me recommend the real stories of people involved in the Access Program at Hamilton College and a touring exhibit “Welfare Saved My Life.”

Ellen Dannin is Professor of Law at Wayne State University Law School. She is the author of Working Free: The Origins and Impact of New Zealand’s Employment Contracts Act (Auckland University Press, 1997) and many other publications. Her latest book Taking Back the Workers’ Law: A Strategy for Values-based Labor Law Reforms was published by Cornell University Press in 2006.  This review also appears in Voices.