Because empire creates so many enemies it has to be rigorously defended.  To gain support of the citizenry, agents of empire create bogeymen, founded in fact but demonized, behind which the ongoing work of empire can be accomplished.  In the 20th century the demon was communism; in the 21st it is terrorism.

Currently, defense of the U.S. empire in North America is assigned to the Department of Homeland Security (DHS), the largest and most powerful police force that has ever been assembled.  DHS incorporates more than 87,000 jurisdictions on the federal, state, and local levels that include the powerful Transportation Security Administration, Customs and Border Protection, Citizenship and Immigration Services, Secret Service, Federal Emergency Management Agency (FEMA), U.S. Coast Guard, Federal Law Enforcement Training Center (FLETC) and, the dreaded Immigration and Customs Enforcement (ICE) with its Detention and Removal Operations (DROs).

The Southern Border Initiative (SBI) is a major focus of the DHS. 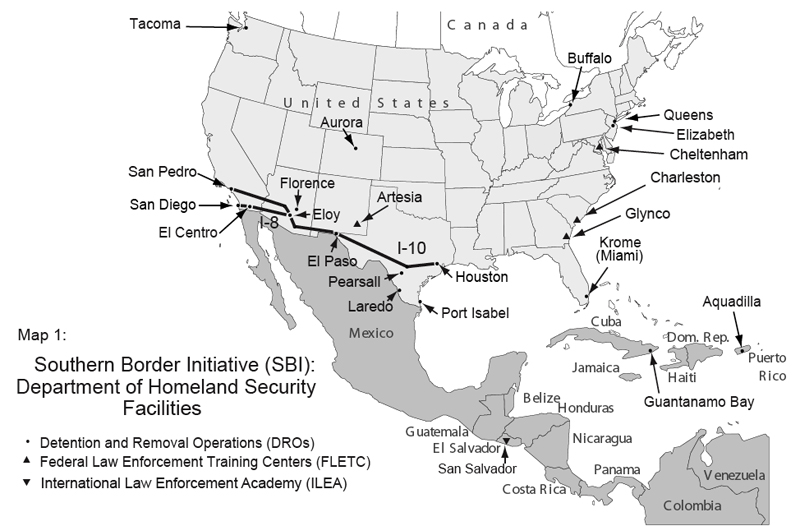 Map 1 shows the location of DHS facilities in North and Central America and the Caribbean.  In stark contrast to the open U.S.-Canadian border in the north, the SBI, which is concentrated along I-10  (parallel to the U.S.-Mexican border) from Houston to San Diego-L.A., is obviously the main line of defense of the empire.  The reason for this concentration of resources in the south lies in the real, versus proclaimed, function of the SBI.

The stated mission of DHS is to protect the American people and homeland from terrorism, but the real agenda is to promote the interests of the most predatory empire in history (see Richard D. Vogel, “Transient Servitude: The U.S. Guest Worker Program for Exploiting Mexican and Central American Workers,” Monthly Review 58.7, January 2007) and to protect it from any threat to its hegemony.  Those threats include all grassroots movements, foreign or domestic, that call for social or economic justice.

History shows that empire and justice are mutually exclusive.

Martha Ojeda, Executive Director of the Coalition for Justice in the Maquiladoras, is one of the first known domestic targets of the DHS.  Martha, a cross-border labor activist who worked in the maquiladora sweatshops like her mother before her and is now a U.S citizen, has dedicated her life to the struggle for justice for workers in the foreign-owned factories in Mexico.

Martha was detained and interrogated twice by DHS during her most recent organizing tour, first at Reynosa/Pharr on March 12, and a second time at Tijuana/San Diego during the following weekend.

The report of the detention and interrogation at Pharr reveals the covert agenda of DHS.  “Evidence” found in the trunk of Martha’s car that caught the attention of agents included photographs of a masked man (Subcommandante Marcos, the universally recognized spokesman for the Zapatista uprising in Chiapas) and copies NAFTA from Below: Maquiuladora Workers, Farmers, and Indigenous Communities Speak Out on the Impact of Free Trade in Mexico, co-edited by Martha and recently published by CJM (available online at www.coalitionforjustice.net).  On the basis of this “evidence” Martha was detained and interrogated for six hours.

During the initial interrogation, the ICE agent in charge asked Martha if the masked man in the photograph was a member of al Qaeda, and noted that there were pictures of masked individuals in NAFTA from Below.  He also asked Martha if she had ever been in Afghanistan.

A second investigator from a DHS anti-terrorism unit who was called in looked at the same “evidence” and asked the same questions.  When Martha asked the agent if she was being charged with a crime and needed to call a lawyer, he replied that after the interrogation he would decide if she needed a lawyer or not.

During Martha’s detention, they seized her cell phone, searched her car, examined every document and piece of paper in it, and opened and read her personal mail.  When she was finally released, she was told that DHS was going to continue investigating her.

The next morning Martha found her computer temporarily locked, and the following weekend when she attempted to cross the border at San Diego to attend a conference, she was again detained, indicating that she has been flagged by the DHS like thousands of other individuals.

The case of the detention, interrogation, and subsequent flagging of Martha Ojeda, a U.S. citizen and officer of an NGO, would seem almost farcical if it weren’t for the chilling effect such actions have on attempts to establish cross-border solidarity in the struggle for social justice.

Under the cover of combating terrorism, the DHS is attempting to silence the voices of dissent to the policies and practices of U.S. imperialism.

In the wake of her confrontation with the DHS, Martha Ojeda has issued a call to develop a strategy to deal with this blatant harassment of working people and people of conscience on both sides of the U.S. Mexican border.