The exiled German philosopher Walter Benjamin, 48 years old, portly and with a heart condition, joined a hiking tour group in Banyuls-sur-Mer on the French side of the Pyrenees on September 24, 1940. He had no backpack, only a briefcase. He let the group return without him and spent the night on the open hillside. The next morning, two women and a boy set out from the town in the early dawn and met Benjamin on the mountain. He had managed the previous day to cover the first half of the trip over the Pyrenees into Spain and now set off with the small group to complete the border crossing.

Benjamin’s breath was short, and he needed to stop and rest every ten minutes. He did not let the briefcase out of his hands, though the others offered to carry it. One of his companions later recalled that his life seemed of less value to him than the briefcase. In the briefcase were his pipe, spare glasses, and a manuscript.

When the group reached Port Bou on the Spanish side and presented their transit visas to the police, they were told that the Franco government had the previous night nullified all such visas and that refugees such as they from unoccupied (“Vichy”) France were now to be sent back at once.

On September 24, 1940, Marshal Petain, head of the government of Vichy France, met with Hitler at Montaine. An agreement was reached; they shook hands. A section dealt with extradition of refugees in unoccupied France. All that remained for the French to do was decide the question of identity. Once the person the Nazis wanted was identified, the French were to “surrender” that individual “on demand.”

On the Port Bou register of deaths, it is recorded that Walter Benjamin died at 10 PM on September 26, 1940. The accounts of his companions differ, and it is possible that he died the next morning, September 27, 1940.

Their account is that faced with being turned over to the Gestapo he committed suicide by taking an overdose of morphine. His possessions were turned over to the court in Figueres on October 5, 1940, and were listed as including “a leather briefcase like businessmen use . . . and papers whose content is unknown.” When the Figueres archive was transferred to a different building in 1975, it was found that Benjamin’s records “had been visited by water and rats” and had to be thrown away.

We will never know what manuscript was in the briefcase. 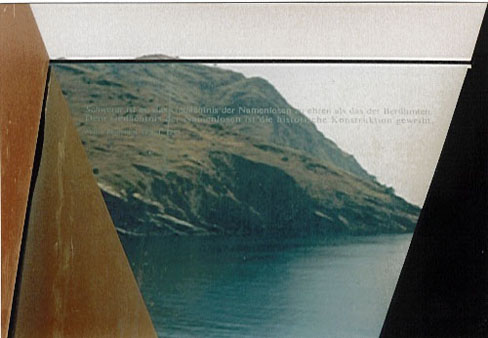 A refugee in Paris after the Nazis seized power in 1933, Benjamin’s primary project was a vast compilation of varied information about 19th century Paris presented as montage, not as narrative. He had called Paris “the capital of the 19th century.” He sought by focusing on the many Parisian arcades (glass-roofed passages cut through the middle of blocks and lined with shops) to find a key to the social history of the explosive capitalist relations of commodity and spectacle that from a small beginning have come to smother the globe.

Two centuries have passed from the construction of the first Parisian passages in the early years of the French Revolution of 1789 to the shopping mall world of 2005. Benjamin’s work falls a bit past the halfway mark. It consisted of many folios containing historical and literary extracts, his comments and notes. The folios were preserved (by a friend of Benjamin’s) in the archives of the Bibliothéque nationale and survived the war.

For the English language reader, homage must be paid to the Belknap Press of Harvard University, which in 1999 published a translation of these folios under the title The Arcades Project. A beautifully designed and produced 1,074 page volume, the book is a pleasure to hold and read. It is no mere publisher’s title; it is a public service.

Of the hundreds of arcades (passages in French) in Paris, the index to The Arcades Project has entries for 35. By far the largest number of references (28) are for the Passage des Panoramas. Of course The Arcades Project was a work in process, interrupted by the Nazi entry into Paris and ended by Benjamin’s suicide. All that can be said is that Benjamin had recognized that the Passage des Panoramas was the most important of the arcades, not that he had collected all Passage des Panoramas material that he would need. What we will do here is to present some further material not in Benjamin’s folio. This is material that Benjamin conceivably could have obtained.

The first glass-covered arcade in Paris (excluding the Palais-Royal, whose arcades were not primarily passageways between streets) was the Passage du Caire, opened in 1799, followed by the Passage des Panoramas in 1800. By 1811 a guidebook to Paris, Le Cicerone ou l’indicateur de Paris, devoted a page to the phenomenon of the newly built Passages.

There are in Paris approximately a hundred and forty passages. These passages greatly shorten journeys; but one has to be familiar with them, and that is extremely difficult. The most frequented are furnished with shops and are worth seeing: such are Feydeau, des Panoramas, du Caire, du Commerce, du Saumon, Delorme, etc.

The passages such as du Caire, des Panoramas, de Feydeau, are very convenient for pedestrians; they get a more agreeable place to walk, shelter from rain, and a brief respite from the irritating need for constant alertness against all the embarrassments of heavily traveled streets. There should be more of these passages; they would provide a place for the shops that block access to public monuments, quays and streets. But, at the same time, the merchants would have to be required not to spread out beyond the space allotted to them. The exterior display-counters of the shops in the passages de Feydeau and des Panoramas occupy on each side a third of the public walkway, so pedestrians can only use a third of the space which belongs to them. This arrangement seems extremely advantageous to pickpockets, especially at the end of the spectacles [ed.,when the crowds leave the displays at the panoramas].

In the days of the July Monarchy of Louis Philippe (1830-1848), the Passage des Panoramas came to lie truly at Ground Zero of the new capitalist culture. At the south end,

the Passage des Panoramas opened on the Rue Saint Marc, a few steps from the newly constructed (1826) Bourse, or Exchange.  At the north end, the Passage de Panoramas opened on the Boulevard Montmartre, adjacent to the Théatre des Variétés (visible at the left end of the illustration), the Opera, then located where the Boulevard Montmartre meets the Boulevard des Italiens, and the largest cluster of cafés in Paris. From the stock speculators and swindlers at one end to the spectacle at the other, and with a shopping mall between — the germ of the global capitalist future. The map is from 1838.

In the Second Empire (1852-1870), the building schemes of Haussmann left this district of the central core of bourgeois Paris unchanged. But with the development of the nascent culture of speculation, shopping, and spectacle came the dialectical development of resistance. And it flared in the same locale.

In the revolution of February 1848 that overthrew the Louis Philippe regime, a strong barricade closed the end of the Rue du Faubourg Montmartre where it reached the Boulevard Montmartre, a minute or two stroll from the Passage des Panoramas and the Passage Jouffroy.

Several attacks on the barricade were repulsed before King Louis Philippe fled. A barricade at the same spot was again a scene of fierce fighting in the final days of the Paris Commune. On May 23, 1871, the revolutionary people of Paris battled the army here for a day, halting for a moment the army’s drive to gain control of the heights of Montmartre to the north. This 1878 map shows the location of the barricades of 1848 and 1871 (arrow), and also the Passages Jouffroy and Verdeau on the north side of the Boulevard Montmartre.

Of all the 28 references to the Passage des Panoramas in The Arcades Project, only one refers to sexuality. Benjamin presents a quotation from F.F.A. Béraud, Les Filles publiques de Paris (1839), connecting the sudden absence of streetwalkers in the Palais-Royal and the attractions of the new arcades, mentioning in particular the Passage des Panoramas.

William A. Peniston, Pederasts and Others: Urban Culture and Sexual Identity in Nineteenth Century Paris (Harrington Park Press, Binghamton) 2004, is a model of the new social history of sexuality. Peniston examined the police records of arrests for male homosexual offenses in Paris in the 1870s. From the time of the 1789 revolution, in France consensual sexual relations between persons of the same sex have not been criminal. The Napoleonic penal code of 1810 (drafted under the supervision of Cambacéres) contained articles on rape and sexual assaults, public offenses against decency and the incitement of youth to debauchery.

The great majority of men arrested for sexual offenses with other men involved public behavior, either sex in public or accosting men for sex. The great majority of those arrested were skilled and unskilled workers or servants. Peniston plotted the place the arrests took place, with this result:

The largest number of arrests were in public streets, with equal numbers in the Champs Elysees and the Boulevard Montmartre. The next largest number of arrest were at urinals, primarily those at the Bourse and secondarily those in the Champs Elysees. The third largest number of arrests were in commercial arcades, and (again excluding the Palais-Royal) of the more than two hundred Passages in Paris the only ones where arrests for same-sex public offenses took place were: 1. Passage Jouffroy; 2. Passage des Panoramas; and 3. Passage Verdeau. A leisurely short stroll starting at the Bourse, going through the Passage des Panoramas, along the south and north sides of the Boulevard Montmartre, and then through the Passage Jouffroy and Passage Verdeau, would cover the territory in which over a third of all arrests were made for public homosexual offenses in 1870s Paris.

Adolescent outside urinal circa 1870, cover art from Pederasts and Others

The gay kids who will go mall cruising this weekend, from Manila to Minneapolis to Munich, are (all unwitting) in a social historical line of descent that can be said to have an origin in an arcade between the Bourse and the Boulevard Montmartre. The process of capitalist modernity is far more than that, of course, but as I point it out somehow I can see Walter Benjamin smiling.

September 27, 2005, the 65th anniversary of Walter Benjamin’s death as he fled the fascists.

John Mage is an Officer and Director of the Monthly Review Foundation.