Despite union opposition in several countries, the Central American Free Trade Agreement (CAFTA) squeaked through the House of Representatives by only two votes on July 28, after passing the Senate a month earlier.

CAFTA expands NAFTA-style free trade to El Salvador, Guatemala, Honduras, Nicaragua, and Costa Rica — with the possible later addition of the Dominican Republic. CAFTA’s potential impact on workers — especially women workers — is a cause of grave concern for many, as women make up 45 percent of the global workforce but are still 70 percent of the world’s poor. Seventy-five percent of workers in the Central America live on less than $2 a day. 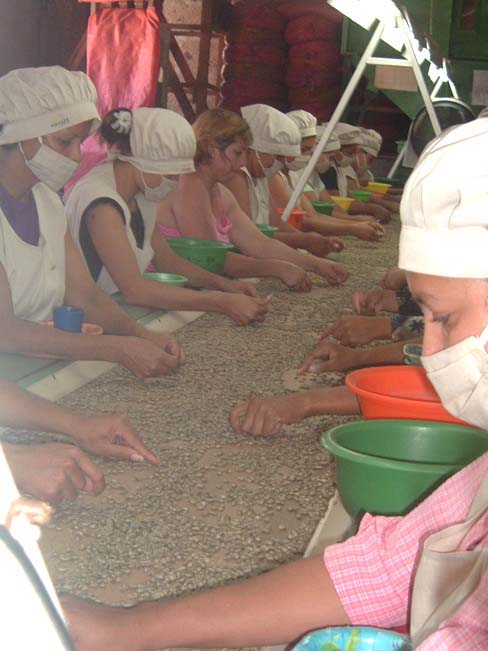 Coffee workers at the Sol Cafe in Matagalpa, Nicaragua. Photo by Sarah Arnason.

Under NAFTA, wages declined significantly for all Mexican workers, but women made much less than men to begin with, so poverty has increased 50 percent for women-headed households in Mexico.

Experts are predicting a bigger impact in Central America, since countries there are less industrialized and financially stable than Mexico, being predominately agricultural economies.

Women farmers are too often invisible in official statistics, since the importance of subsistence agriculture to food security and local economies is underestimated. The UN Food and Agriculture Organization now recognizes that women are responsible for the production of 60 to 80 percent of the food in the developing world. Women are 51 percent of the agricultural labor force globally; and 63 percent of women in developing countries are engaged in agriculture.

Many observers fear that CAFTA will also have a devastating impact on the 5.5 million farmers and farmworkers in the region. The agreement will eliminate tariffs on 80 percent of U.S. goods and 50 percent of U.S. agricultural products, flooding Central American markets with heavily subsidized U.S. produce. “For rural farmers CAFTA means devastation,” says Krista Hansen of the Committee in Solidarity with the People of El Salvador. Women farmers in Central America will be particularly hard pressed to compete against U.S. market dumping, as they have less land and fewer resources in the first place.

Additionally, as Central American men migrate to the cities to find work, more and more women are finding themselves farming full time while maintaining their role as the main caretakers for their children and households. Having less time to balance all these responsibilities on top of trying to compete with U.S. price subsidies often results in major income losses for women, some of whom lose their farms altogether.

Rural poverty increased from 54 percent to 68 percent in Mexico after NAFTA was implemented. More than 80 percent of Mexico’s extreme poor are rural. After NAFTA, 300,000 women farmers in Mexico lost their farms and their jobs. Of the women farmers left, only three percent have more than 10 hectares of land. Women’s farms are usually much smaller than men’s, and when land is titled, it is usually put in a man’s name. This has had a severe impact on women farmers because Mexico has changed its land laws under NAFTA in the favor of individual property rights, hurting women who used to have communal rights to farm land.

Women workers in industrial jobs aren’t much better off, particularly in the free trade zones where they are stuck with monotonous, low-paying work. In the maquiladoras — factories in free trade zones — sex discrimination is especially prevalent: forced pregnancy tests to get hired, physical and verbal abuse, sexual harassment, and age discrimination.

Since women workers make up the bottom rungs of the Central American wage ladder, they will be even harder hit than men, facing disproportionate impacts from free trade. “Women are already experiencing, in many ways, what CAFTA will make worse,” says Hansen.

One of the International Labor Organization‘s five labor rights is the right to be free from sex discrimination in the workplace, but according to Marianne Mollman of the Women’s Rights Division of Human Rights Watch, “all trade agreements negotiated by the Bush administration have ignored the internationally recognized right to nondiscrimination in the workplace, and none has included adequate labor rights protections.”

CAFTA was designed to facilitate the privatization of public resources and services, from health care and education to water and electricity. Since most public service employees in developing countries are women, they will suffer disproportionately under privatization of these services. With public sector jobs typically providing better job security and health care benefits than private sector ones, job loss due to privatization will worsen living standards.

However, privatization under CAFTA will not only affect women as workers. As primary caretakers for their families, women will have to pick up the slack when these services are cut or be faced with hard decisions between medicine, food, school, or rent.

NAFTA forced 1.7 million Mexican farmers off their land, into urban maquiladoras or to the fields of U.S. agribusiness plantations. Before NAFTA there were 900,000 migrant farmworkers in the United States, seven percent of whom were undocumented. Today there are over two million, two thirds of whom are immigrants (80% from Mexico) and half of whom are undocumented. Undocumented workers are extremely vulnerable to harassment and discrimination; they also suffer under some of the highest rates of workplace injuries and fatalities. Additionally, women farmworkers face unique reproductive health problems from pesticide exposure.

Under CAFTA, low wages, poor working conditions, and instability will likely force more Central American workers to immigrate to the United States. Many immigrant women will end up as farmworkers, in an industry where wages are falling and health and safety problems are on the rise. Other women workers will go into low-paying service work or try to find work in what’s left of the U.S. textile and apparel sector, where wages have been steadily declining as corporations move production to free trade zones abroad.

As Farm Labor Organizing Committee President Baldemar Velasquez explains “there are economic interests who want to perpetuate a global low-wage work force and maintain the use of exploitable labor.” In Mexico, the industrialization of agriculture and the added effects of NAFTA have concentrated land ownership in the hands of the rich by displacing small farmers, who end up becoming migrant farmworkers or working in the maquiladoras. Close to 1.3 million agricultural jobs were lost in Mexico under NAFTA. It is no coincidence that there are now over 1.3 million employees in Mexico’s 2,700 maquiladoras.

CAFTA is expected to have an even deeper impact on the lives of Central Americans than NAFTA has on Mexicans.

Melissa Hornaday started at Labor Notes in June 2005 after working with Students for Economic Justice (a United Students Against Sweatshops chapter), and interning with the Women and International Development Program at Michigan State University. A shorter version of this article originally appeared in the December issue of Labor Notes available at www.labornotes.org. Her email address is melissa@labornotes.org.