On a Thanksgiving visit home two years ago to his family in Sault Ste. Marie, Ontario, Jim Loney tried to explain to his father why he wanted to go to Iraq with Christian Peacemaker Teams.  He told his Dad about a grade school chum, Rick, sent to Afghanistan with the Canadian Armed Forces, who narrowly escaped death from a roadside bomb.

“If Rick was being asked to risk his life as a soldier, then, I, as a pacifist Christian who believes that war is not the way to peace, should be prepared to take the same risks,” he recalled trying to reason with his father. 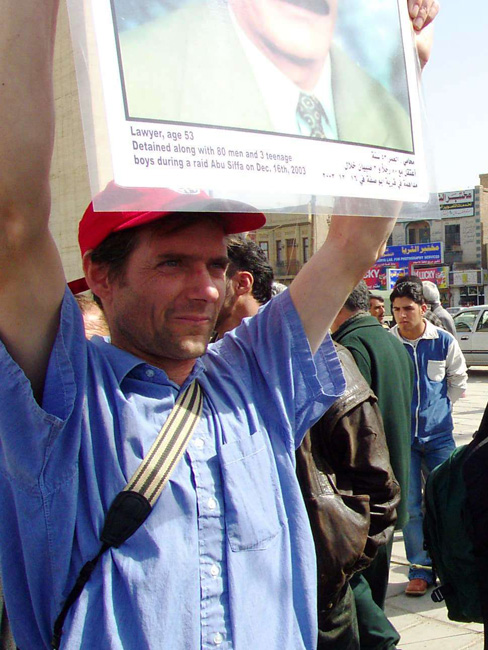 Jim returned from Iraq safely, but on a return trip this year, his father’s worst fears were realized. On November 26, Jim was taken hostage in Baghdad, along with three CPT colleagues, Harmeet Sooden, also from Canada, Norman Kember, from England, and Tom Fox, from the U.S.

Millions of people around the world are learning for the first time about these peace warriors.  But what few people know is that CPT members go to conflict zones like Iraq expressly stating that if they are abducted they do not want to be rescued by the military or any violent means.

Claire Evans, delegate coordinator in the organization’s Chicago office, read the following from the CPT’s “Team Statement” adopted by each team going into a conflict situation. “We reject the use of violent force to save our lives in the event we are kidnapped, held hostage or caught in the middle of a violent conflict situation.  We also reject violence to punish anyone who has harmed us.”

Gene Stoltzfus, a retired CPT coordinator, explained why the group’s members go out of their way to renounce violence even to save their own lives. “We are a non-violent group.  We can’t preach nonviolent action in protection of human beings and then ask it to be used on our behalf . . . that would be inconsistent, inappropriate and incoherent.”

Alluding to the organization’s larger strategy, the retiree who volunteered as a civilian aid worker in Viet Nam in the mid-60s explained: “If we would be rescued by a military or police action and people were killed, it would set a precedent setting back the work we do.”

He explained that CPT members, working in the nonviolence tradition and philosophy, are prepared to accept whatever happens as a result of their actions, all of which “becomes useful as a moral witness to point to the larger goal we’re working for — a fair and just society.”

“We would not have had the modern civil rights movement if people said, ‘it’s too dangerous to go across that bridge (the Edmund Pettis Bridge, in Selma, Alabama).’ Danger is inherent in the nature of non violence.”

The organization is not relying on the fates to rescue the four held in Baghdad, however. Family members of the hostages have thanked the Canadian government for its efforts, CPT has appealed to its considerable network of Sunni and Shia clerics across Iraq, appeals have been sent out in Arabic from CPT supporters in Palestine, and already over 200 prayer vigils and demonstrations for their release have been held on three continents, according to the CPT website.

True to CPT’s principles, the catchphrase, “Love Your Enemies; End the Occupation; Release the Peacemakers,” has been appearing on banners at prayer vigils around the world, such as those at over a dozen churches in Italy last Sunday where the following prayer was said: “We pray for their kidnappers, that they may realize that violence will not help us build a better world. We pray for our four friends, that their faith may sustain them in these difficult times and that they may bear witness of the Christian love for one’s enemies, as they have always done in their activity in support of the victims of war. We pray for all the Iraqis who have disappeared or are being held captive, that they may soon be reunited with their loved ones.”

Yesterday, across Canada, CBC radio listeners heard an announcer play the haunting second movement from Henryk Gorecki’s Symphony of Sorrowful Songs, offering it “as a public prayer” for the four hostages.

Two years ago on that holiday trip home, Jim Loney was not very successful explaining why he wanted to go to Iraq. His father’s response to him at the time, quoted in an article Jim wrote, was, “What can you accomplish by going there? It’s futile. Every westerner is a target. They don’t care who you are or why you’re there. It’s just not worth it.”

Two days ago, Jim’s family wrote the following, indicating his work is having an effect beyond Iraq, all the way to Ontario. “Our family would like to express its deepest gratitude for the tremendous support we have received from every corner of the world and from people of all faiths, especially the Muslim community. We know that our James would be overwhelmed by the grassroots support that he is receiving. We are too. We have come to a fuller understanding of the effect that his humanitarian work for peace has in the world.”

Mike Ferner spent time with CPT and Jim Loney on a two-month trip to Iraq in early 2004.  He is a freelance writer from Ohio.