Hollywood has been declining for all of its history. The experts were writing off the medium in 1918. Audiences were probably grumbling that they no longer made films the way they used to when Jesse Lasky stopped filming Famous Players in Famous Plays and went along with the new fashion for close-ups and cross-cutting.

Still, every change in style entails its own losses. Silent film is a different medium entirely from sound film, and the triumphs of Keaton and Chaplin could never be repeated or even equaled in the sound era.

And sometimes the grumblers are right. Today’s big-budget films are obstinately unmemorable in everything except their sadistic treatment of their audience. Plots are simplified to non-existence, and in place of character development there are explosions — lots of explosions, leavened by the occasional car chase.

If silent film was a kind of wordless opera and sound film a visual novel, the contemporary Hollywood film is an amusement park ride. Dolby stereo and digital special effects have achieved the sense-filling ambitions of the schlock moviemakers of the fifties and their gimmicks like “sensurround” and “the tingler.” We don’t have to get lost in the movies any more. They leap from the screen and take us over.

This aesthetic aggression is fitting, because the mainstay of the big-budget film is violence. One might expect more public outcry at this, but the films get away with it, perhaps because they depict an oddly bloodless violence. Sex scenes even in mainstream film have gotten ever more explicit, but Independence Day can wipe out most of the world’s population with less concern than the average Western hero demonstrated when dispatching a single Indian or badman.

The weightlessness of today’s film violence — so different from the deliberate horror of Bonnie and Clyde or Sam Peckinpah‘s films of the seventies — echoes its essential pointlessness. Ever since Cabiria and The Birth of a Nation, film has gloried in violence. But righteous filmic violence was functional violence. It brought about a changed and better world. (In The Birth of a Nation this was accomplished by lynching African Americans, but it was in the interests of what Griffith, alas, thought was a better world.)

Most war films had the same subtext, though the exact type of world betterment varied from decade to decade. Then there were gangster films and films noirs, where the mayhem often implied a critique of the existing social order. But the great Hollywood genre for the discussion of violence was the Western.

Every Western drew on a strong if heavily biased underlying narrative: the creation of a settled, lawful, bourgeois world. Indigenous people existed as obstacles to progress. So did the criminality of the gunman. Even when the film’s plot turned on the protection of a beleaguered farmstead, often home to a widow and her innocent children, the subtext was the defense of civilized agriculture as it supplanted both primitive savagery and the rule of the cattle barons. The widow was no ordinary widow; she was a pioneer. At the same time, the Western allowed a degree of ambivalence about the price of progress and the ethic of violence. Late examples of the genre, like John Ford’s The Man Who Shot Liberty Valance, even turned reflective.

Contemporary film violence is different. It doesn’t quite exist in a vacuum, but it is rarely the instrument of change. It is defensive or, at best, restorationist. The Jedi in the Star Wars films defend the legitimate aristocracy against imperial power-grabs. Implacable aliens need to be defeated or the earth will perish. Godzilla loses his intensely-felt atom-bomb subtext. The GIs in Black Hawk Down, assaulted by faceless Islamic hordes, struggle to get out of a trap.

The basic movement in most of these films is simple. People are living idealized ordinary lives in a well-ordered community. Their peace is broken by criminal or aggressive acts, and the sheer viciousness of the attack licenses the heroes to kill everything that stands in their way. At the end, the proper order of things is restored.

Unlike the Western, with its implied depiction of an unfinished project of civilizing the wilderness, contemporary blockbuster films show civilization as an accomplished ideal. Everything is fine until it is threatened from without. Then all hell breaks loose.

What is being sold, of course, is visceral excitement. And this always does sell, since the nasty secret about violence is that it’s very appealing. (If you need proof, read Bill Buford’s amazing book on English football hooligans, Among the Thugs, especially the chapter that describes the emotional build-up among the crowd until the moment someone first “steps over the line.”) Anti-war films are often self-defeating; we can’t help enjoying the bloodshed we are supposed to deplore. What may be the greatest anti-war film of all, La Grande Illusion, avoided scenes of fighting altogether; the one killing in the film is more like a mutual suicide than an act of war. 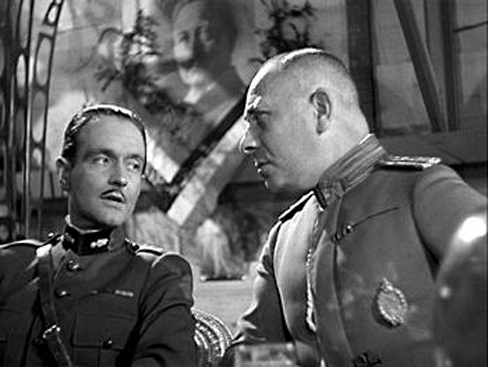 There are no mixed messages in today’s action films, though. We start with the innocents, happy in their achieved perfection, and then the idyll is smashed. The trailer for a recent Bruce Willis vehicle lays it out succinctly: A Small Town — A Random Crime. And of course it’s the Police Chief’s family that ends up in danger.

There is no attempt to assert or imply some kind of historical necessity for the killing. It’s a matter of life or death, us versus them. The criminals, or Islamists, or the faceless ones who set the plot in motion are scum, pure and simple. We don’t know them any more.

But there is, actually, nothing else to know. The bad guys must be nut cases and the evil they work must be unmotivated. Nobody can have a reason for violence, because there is nothing that ought to be attacked or even changed.

There are no legitimate social goals left, so there is no violence we could potentially understand, let alone forgive. Violence can only be the product of psychotic evil. What makes connections between American foreign policy and the New York or London attacks anathema isn’t just the suggestion that people who do unspeakable things have political goals. These days simply having political goals is something unspeakable.

By excluding the possibility that our lives are anything but perfect and by eliminating any position between our good and their evil, these films let us indulge in our voyeuristic pleasure in screen violence with a minimum of distraction and a maximum of self-satisfaction. Over and over again, we watch our way of life defended by the utter annihilation of its lunatic enemies, and the experience isn’t so much a catharsis as it is an invocation of anger and its deliberate channeling to anonymous evildoers. All the real stresses and horrors of American middle-class life can be gathered up and focused on the threat of the outsider, the perpetrator of random violence, the killers who hate our freedom. In the past it was necessary for leaders to create an external enemy and conduct real wars to keep their subjects’ minds off the misery of their own lives. Today, while wars are still very useful in that regard, we can blow off steam and count our blessings by merely watching.

Maybe this is a benefit rather than a problem. But it also reinforces the social paralysis it assumes. Revolution — a violent change in the social order — has vanished from the agenda, but not because violence has been rejected. What has passed from the scene is the idea of social change. And the more we trumpet the good news that history has ended, the more our cinematic dreams become attractive nightmares of free-floating violence. To paraphrase the Red Queen in Through the Looking Glass, these days one has to blow up as much as possible just to ensure that things stay the same.