For fourteen years or so I lived with the most beautiful cat in the world. That, at any rate, was the way most people treated her. On pleasant days our cat would walk no further than the sidewalk. She would wait there all day, and almost every passer-by would stop, coo, exclaim at her wondrous beauty, and stroke her long, white fur.

Had she been a white Persian I doubt that she would have attracted this attention. What drew people to her was her face: a domestic long-hair face with an unusually big forehead, large round eyes, small nose, and puffy cheeks. She looked about as much like an infant human being as is possible without leaving off being a cat.

These are the facial characteristics of most mammalian young, and the sudden access of tenderness and warmth that inevitably greeted our cat was an example of what ethologist Konrad Lorenz called “disarming.” As the late Stephen Jay Gould wrote, “Many animals, for reasons having nothing to do with the inspiration of affection in humans, possess some features also shared by human babies but not by human adults — large eyes and a bulging forehead with retreating chin, in particular.” Humans and many other mammals melt a little bit when we see an infantile face. It keeps us from being too harsh to our young, and it’s also what allows kids to manhandle pets in ways you or I would be foolhardy to attempt.

In other words, kids are mind-altering drugs. We don’t feel the same around them and we don’t act the same. And this is why there’s something a little eerie in the way families with kids are proliferating on television, advertising, and film.

It’s not a complete takeover, but over the past thirty or forty years the image of the family has achieved a kind of normative status. This isn’t the way it always was in American popular culture, and the change isn’t the result of any shift in audience. Back in the thirties any city kid with a dime was likely to spend Saturday afternoon at the pictures, but in the three or four hours of an avidly-watched double feature there weren’t likely to be many shots of family life, except maybe in a B picture like the Andy Hardy series. 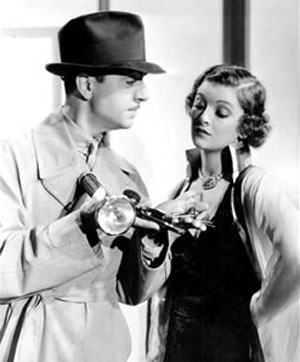 Films were about grownups. If a household was involved it was as likely to be the heavy-drinking Nick and Nora Charles as anyone more settled. True, Nick and Nora eventually acquired a little Nicky; but Myrna Loy only really became a model of middle-class domesticity after the war, in The Best Years of Our Lives. Even the post-war medium of television was slow to catch up to the new domesticity of its audience; it was a novelty for Lucille Ball to appear as a mother.

Today, though, political candidates all need campaign shots with an adoring spouse and children. More and more television shows spin narratives around nuclear families. Stars gush on TV talk shows about the life-transforming joys of parenthood. There are family channels, family restaurants, and family vacations. Times Square is now family-friendly, which it never was at any time in the past. Wal-Mart tries to combat its reputation as a ruthless exploiter of labor by getting employees’ children or parents to pose in newspaper ads, identifying them as such.

The couple with children has become the definition of mainstream life. No wonder so many gays and lesbians want the right to marry and adopt; living single or with an unmarried partner is no longer enough for full humanity. Those who are without children at home Now have to be identified with adjectives — they’re the childless, the DINKs (“Dual Income No Kids”), or the “empty-nesters.” They’re different.

This proliferation of families, wound tight with the tranquilizing presence of children, is one of the elements of the new dreamworld. As ethically different as it is from the sex-obsessed, often pornographic edge of pop music, the omnipresent image of the family works in much the same way. Lorenz’s disarming reflex is invoked over and over to generate a perpetual haze of parental warm fuzziness.

And just like the endless tumescence of “Sex Machine,” the family warmth invoked and deployed all around us is a state rather than an incident of a process. The obvious fact about children is that, barring disease or accident, they grow up and leave. In the media, though, they grow up but stay around. We meet, marry, have children — and life stops.

That’s how we want it. Lynn Johnson, who writes and draws the popular semi-autobiographical family comic “For Better or for Worse,” has confessed that she would have preferred that her own son had stayed at home, so she has his comic-strip counterpart living close to his parents and thinking about buying his childhood home from them.

People have always loved their children; once-modish arguments that childhood was “invented” a few hundred years ago are now mostly rejected. And a good part of human labor has always been expended on raising children.

Today, though, when we need a smaller share of our life-span for child-rearing than in any previous generation, we find ourselves more than ever defined by it. This is a measure of the emptiness of the rest of our social activity. In earlier centuries, and even fifty years ago, parents raised their children with some end in view. Today, children are an end in themselves — precisely because no other social ends are recognized.

Child-rearing and its round of events — kindergarten graduation, summer camp departure, junior prom, packing for college — has become what Guy Debord called “pseudo-cyclic time.” It doesn’t express the biological rhythms of human generation, aging, and death, yet at the same time it repeats itself endlessly in place, without contact with the transformations of history. Real involvement in the movement of history is impossible, since under capitalism the history of human activities becomes the history of things:

The spectacle, as the present social organization of the paralysis of history and memory, of the abandonment of history built on the foundation of historical time, is the false consciousness of time. (The Society of the Spectacle, § 158)

By the same token there’s no access to the movement of individual life. What is then re-presented to us in dreamworld is cut off from lived human time and is thus inevitably static:

The spectator’s consciousness, immobilized in the falsified center of the movement of the world, no longer experiences its life as a passage towards self-realization and death. (Ibid., § 160, in part)

Debord lived long enough to see (and see his thought used by) the briefly-triumphant culture of youth — another attempt at a pseudo-time removed from social process, cut short in part by the end of widespread affluence in the mid-1970s. Since his death, though, a new and better model has taken over, one which offers several advantages to governments and advertisers. Family images attract a much wider demographic and have the potential to retain customers for much longer than the few years of youth. They appeal to a less difficult audience, one whose tastes are easier to find out and manipulate. Best of all, they allow the agencies which make use of them to draw on the druggy satisfactions of the disarming reflex. The family circle is the pseudo-cyclic time of capital — “the consumable disguise of the commodity-time of capital . . . which aims to retard concrete daily life, and to keep it retarded” (Ibid., § 149) — made addictively enticing by our own biochemistry. Like sex, it sells itself.