I only saw Sly and the Family Stone once.  It wasn’t the best of times for Sly, and my recall is very hazy, thanks to a combination of Henninger Bier and some very good Afghan hash that was making the rounds of the Frankfurt International Rock Festival the summer of 1973.  By the time I saw the band, Sly’s misfortunes with drugs and fame were as much the stuff of rock and roll legend as was his penchant for missing concert dates that had long ago been agreed to by his agent and the promoters involved.  All I really remember was hearing “Dance to the Music” that hot afternoon at the racing ring where the festival was being held.

Nonetheless, Sly Stone and his vision of rock music was revolutionary.  An interracial mix of musicians and friends who learned their musicianship in the job, Sly and the Family Stone mixed the infectious rhythms of funk and the easy and very singable bops of bubblegum pop together with a psychedelic energy from the San Francisco Bay Area into a phenomenon that brought teenyboppers, hardcore freaks, brothers and sisters in the Panthers, middle-class housewives, and GIs in Vietnam together in a celebration of rock and soul music (to borrow a phrase from Country Joe and the Fish‘s song of the same name).  It was a postrevolutionary culture that the brothers and sisters of multiple skin tones up on the stage with Sly were living.  The top 40 hit “Everyday People” was nothing more (and nothing less) than a three-minute call for tolerance across the spectrum.  “Different strokes for different folks” — that’s all.  Simple enough, but how to do it?

The first time I heard the song “Stand!” was another of those revelatory moments that rock provides.  Like the first time I heard “All Along the Watchtower,” “Come Together,” or “Gimme Shelter,” that hearing made me think of the world in a different way.  Other folks have other songs, but everyone who listens to music has at least one piece that opened their minds.  It could be Stravinsky’s Petruschka, Beethoven’s Ninth, The Beatles’ “Tomorrow Never Knows,” or any other tune in the world that just changed the way you thought.  For me, the list is hundreds of measures long, but I’ll leave this column’s list at the four I mention above.

Anyhow, it was on the radio that I first heard the song “Stand!”  Top Forty radio, in fact.  WPGC out of Washington, DC.  My  brother and I shared a room and the radio dial went between WPGC and WHFS.  The latter station went “underground” after 4 PM every day back then (this was a few years before FM radio developed the so-called AOR format), playing entire albums and broadcasting news about the antiwar movement and the counterculture.  I first heard cuts from Bob Dylan bootlegs on that station.  Anyhow, back to WPGC.  I heard that opening roll on the snare drum and then the words “Stand / In the end you’ll still be you / One that’s done all the things you set out to do.”  The horns and that funky guitar lick brought me right into the song.  The lyrics implored me and everyone else listening to “Stand / For the things you know are right.”  After all, there was a giant about to fall.  Furthermore, it didn’t matter if you won because the very fact of standing up for what you believed would set you free.  All of that in a pop song!  That’s why Sly was so good.

And he kept getting better.  The album Stand! addressed the nature of language and racial prejudice in its song “Don’t Call Me Nigger, Whitey” and had Sly taking us all higher.  Unfortunately, as the man began getting high a bit too much, it began to affect his touring.  There were shows when Sly either showed up late or not at all, causing his reputation to falter.  However, the group’s performance at Woodstock remains one of legend and for those who actually saw it, it was one of the best of the festival.  That summer also saw the band’s single “Hot Fun in the Summertime” climb the charts.  This tune remains one of the best songs to celebrate summer every written.  In 1969, the band released one of the masterpieces of funk, “Thank You (Falettinme Be Mice Elf Agin)” — a rhythmic and lyrical pleasure to hear that expressed the confusion of Sly’s life and that of the world we were all living in: “Lookin’ at the devil, grinnin’ at his gun. . . . We begin to wrestle I was on the top .”

Meanwhile, the war in Vietnam was getting uglier and more pointless, and the war in the US between the system and the people in the ghettos was just getting worse.  Richard Nixon was on top and the paranoia of those outside the power structure was intensifying.  By 1971, the Black Panthers were in disarray, with many of its leaders in jail or exile and the rest of the party debating the date of the revolution.  The dark shadows of heroin and cocaine were spreading even further throughout the Black community and into the youth counterculture.  Police were being granted more powers every day while the federal government violated the constitution without qualm.  J. Edgar Hoover and Nixon’s Justice Department looked the other way while CIA warlords in Vietnam and Laos smuggled smack into the ghettos of the US.  GIs coming back from the war were coming back with big-time habits and a nightmares that only heroin could calm. 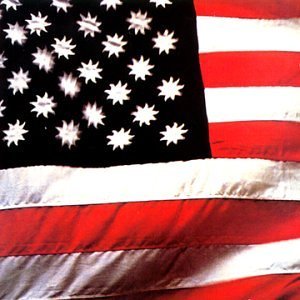 Into this dark hour came Sly and the Family Stone’s album There’s A Riot Going On.  The cover was the Stars and Bars of the US flag and the message was bleak.  Taking its title almost assuredly from the Leiber and Stoller song “Riot in Cell Block #9,” the album chronicles the downfall of the hippie dream of love and peace in the song “Luv n’ Haight” and the destruction of a better future.  Despite the hopeful strains of “Family Affair” and “(You Caught Me) Smilin’,” this album is the story of the street scene in the Haight, the Village and every other hippie ghetto in between.  It’s the story of despair and exploitation, death drugs taken and death drugs sold, from the psychedelic hopes of Sgt. Pepper to the demonic power chords of Steppenwolf’s “The Pusher.”  It’s the end of that aspect of the American dream enunciated so well by Martin Luther King, Jr — “when the sons of former slaves and former slave owners will be able to sit down together at a table of brotherhood” — and Sly himself: “I am no better and neither are you / We are the same whatever we do.”  Dr. King stood on a stage filled with people white and black that day, just as Sly stood on a stage filled with people white and black every time he performed with the Family Stone.  In the same manner, their audiences were multi-hued.  The album ends with a sad acknowledgment that that dream for justice in the land of slavery may have met its premature end.  Sly is the brother that always hoped for an interracial America where justice ruled the land and people lived as one.  His music had always expressed a hope that crossed skin tones.  His funky rock and roll had birthed itself in the freedom rides and the counterculture of the San Francisco Bay Area.  But, like the streets of that city, things turned sour.  There’s A Riot Going On tells that story.

When I heard via a Washington Post  (1/27/06) article that Sly and his band might regroup for the 2006 Grammy Awards, I have to admit that my emotions bordered on ecstatic.  Not since Bob Dylan’s performance there in 1998 (the show where the fellow forever known as Soy Bomb showed up) had I even considered watching this self-congratulatory exercise in awarding what is oftentimes merely money-making mediocrity.  I mean, I’m a guy who last watched the Academy Awards when Hearts and Minds won Best Documentary.  What might the band play?  What song could possibly speak to the commercial nation of 2006 TV land, even if there were a hip hop artist or two in the mix of nominations? Thank you Falletinme be on TV?  In a medium where everything becomes just another pose designed to sell a product, would Sly be able to make a point?  Or would he even make it onto the screen?  After  all, the man has had his struggles over the past three decades.  And this is the age of five-second delay, after all.  Given this, it didn’t matter what he played, I guess, just that he would show up and play was enough.  The Stones started the week selling their product during the Super Bowl half-time show and, despite the blatant censorship of two of their songs (thanks to that five-second delay) and the fact that they truly are nothing more than a product (albeit one of the best products on the rock music shelf), they did turn in a damn good performance.  What might a Sly and the Family Stone performance portend?  Of course, all of this speculation assumed that the man and his band really were going to appear.  The only mention on the TV schedule was of some kind of all-star tribute to the group — nothing about an actual appearance.  There was nothing left for me to do but turn on the television and see what goes down. . . .

. . . Well, Sly did show up.  The tribute to his music was a musical highlight of the show, with rockers, hip-hoppers and pop singers joining together in a tight performance of a medley of some of the Sly and the Family Stone’s hits.  The man himself appeared during “I Want to Take You Higher.”  He stuck around for a couple verses, singing a few phrases and plunking a few chords on the keyboard.  Then, he left, white mohawk and all.  It was kind of like seeing Muhammad Ali these days — a shadow of the former strength and power, although rumors continue to hit the music pages that the group might get together again and, at the least, release a new album.  There were a few other musical performances that transcended the venue — U2 did their song “One” with Mary J. Blige.  Ms. Blige kicked ass on her vocals, to put it mildly.  John Legend performed his soulful solo piece, “Ordinary People,” and Paul McCartney rocked the house with a blistering version of “Helter Skelter.”  The only overt political statement of the night was Bruce Springsteen shouting “Bring Them Home” after performing his song about the moral quandary of soldiering, “Devils and Dust.”