In the eye of the Wall Street Journal, General Motors’ Jobs Bank program — a program which pays some workers their regular wages and benefits to sit on their hands and stare at the wall — is the symbol of what’s wrong with the company.  The lead story in the 1 March 2006 issue of the paper1 is a mocking look at the program.

Quite some way down in the story, though, you find out that some workers are actually doing quite interesting and socially useful things with their time.  For instance:

Dean Braid, 50, worked at GM as an engine and transmission tester for 21 years.  Today, GM pays him $30 an hour as he helps a high-school friend, Doug Kahn, who is confined to a wheelchair.  Mr. Braid is installing ramps in his friend’s family farmhouse and has repaired the engine of the 1984 Ford van Mr. Kahn uses.

“Dean being here has been like a little miracle for me,” says Mr. Kahn, who was injured 38 years ago in a swimming accident and now lives by himself.  “It has made my life better.  Just having him come by forces me to get up and get out of bed.”

I don’t know about you, but, for me, that one anecdote is justification enough for the entire Jobs Bank program.

But there’s more in the Journal article to contradict its own sarcasm — at least for those who care about workers and their families.  First, other participants in the program are also doing very valuable things, from installing home security systems for elders, raising money for food banks, taking classes for future careers, to improving public parks.  The Journal itself admits it in passing: “volunteering . . . is what many of . . . [the GM] workers [in the Jobs Bank program] do.”  Second, the program only covers a small minority of the hundreds of thousands of auto jobs destroyed in recent decades, so it can hardly be blamed for the automaker’s financial woes.  Third, the program is a product of struggle by the UAW and therefore, like every other gain won by unions, must be protected until and unless something better comes along.

One may ask why the bosses pay some Jobs Bank participants to sit and stare at the wall.  Nowhere in the article is there any indication that they used the valuable time and ideas of these workers — many of whom have advanced technical skills — to find a way out of their technological backwardness vis-a-vis other companies (see Ralph Nader’s column “The Dark Age of the Auto Industry” in the 28 February 2006 issue of CounterPunch for more on this). By paying workers to do nothing, though, GM knew right at the start that, when it became time to pull the plug on the Jobs Bank, it would have a readymade excuse.

The autoworker described above providing home care to his friend leads us to another point which will put this whole story in an even more fundamental context.  In the 1 March 2006 issue of the New York Daily News is a story about the struggle of home health aides in the city for higher wages (many make only the state minimum wage of $6.75) and benefits (most contractors provide none).2

Here’s the connection: The Journal article describes auto employers’ perplexity faced with a choice between paying workers to produce cars that the market doesn’t need and paying them to sit on their hands. They chose the latter. The productivity of our industries long ago reached the point where we could have shortened the workweek to 30 hours or even less (at the same wages) and re-employed “surplus” workers to provide services — like home health care — that are desperately needed.  And this heightened productivity also means they could be paid at an autoworker’s wage, not at $6.75 an hour.

Workers know we’ve got to shift gears (pun intended), and some are already making suggestions about how to do so.  In the face of threatened plant closings and layoffs, UAW Local 879 made a proposal recently to convert its plant to make environment-friendly vehicles.  Workers are smart enough and skilled enough to know what this society needs in the way of goods and services and to make and provide them.  All we need is access to the resources to make it so.

Getting there, of course, starts with defending programs like the Jobs Bank.  And if the bosses don’t like what workers do with their time there, WE’LL decide.  Of course, in order to do so, we may just have to take over the bosses’ factories and bank accounts.  But since you proved so inept at managing our time, bosses, we’ll just have to do it without you! 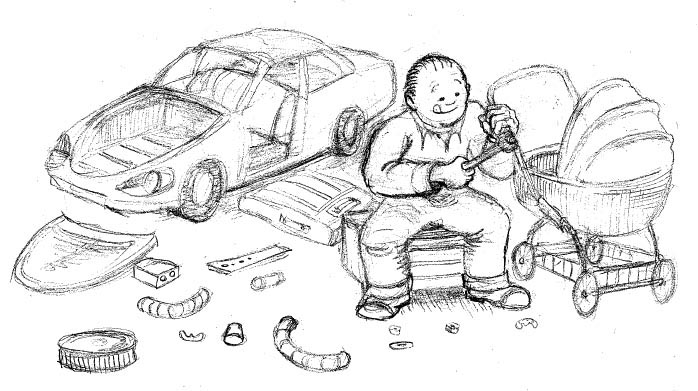 Andrew Pollack is a longtime labor activist. His publications include “Grocery Strike Defeated: How Labor Can Pick Up the Pieces”; “Fightback Needed Against GM Threats: Jobs, Health Care to Be Slashed in Auto”; and “The United Pension Default: Saving ‘Our Airline’ or Saving Labor?”