“I cannot completely understand Palestinian women or their suffering.  I don’t know how I would have survived such humiliation, such disrespect from the whole world.  All I know is that the voice of mothers has been suffocated for too long in this war-stricken planet. . . . This I know and it is very little.  But it is enough for me to remember these women are my sisters, and that they deserve that I should cry for them, and fight for them.”
— Dr. Nurit Peled-Elhanan, 2005 International Women’s Day Address to the European Parliament

Political arrest is one of the means that the Israeli occupation uses to suppress resistance.  Today there are over 9,000 Palestinian political prisoners in prisons inside Israel and in Israeli military detention centers and interrogation facilities throughout the West Bank.  Among the prisoners are about 115 women.  Every Friday, women protest outside the Red Cross offices in Tulkarem, Hebron, Jenin, Qalqilia, etc., in solidarity with the Palestinian prisoners — their fathers, brothers, sons, uncles, sisters, and mothers. 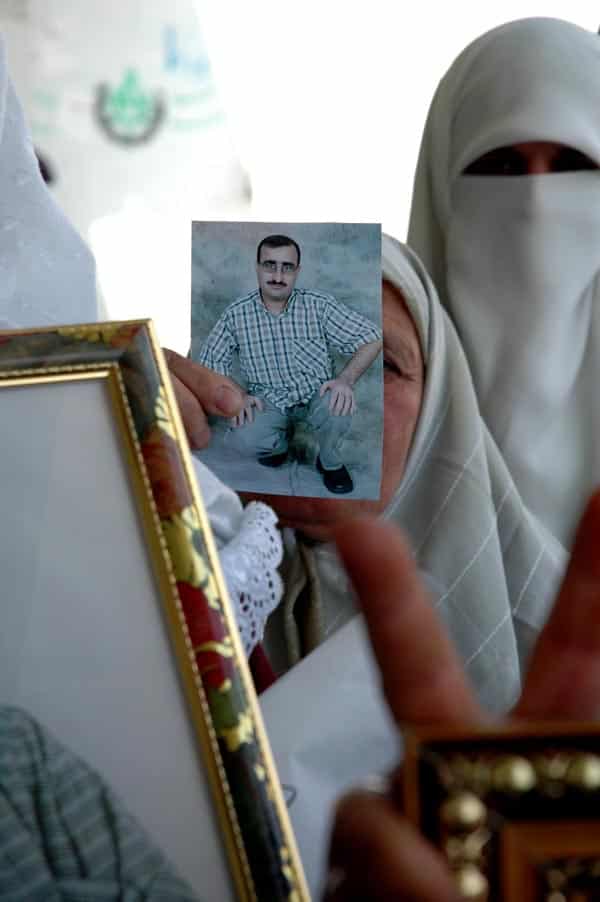 17 April 2005: Women holding photos of their family members being held in Israeli prisons and military detention centers during a demonstration in Hebron in support of Palestinians prisoners. 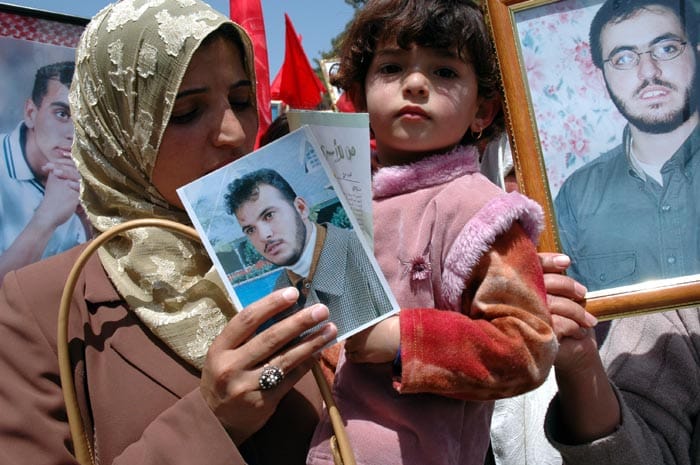 17 April 2005: A mother and her daughter during a demonstration in Hebron in support of Palestinians prisoners. 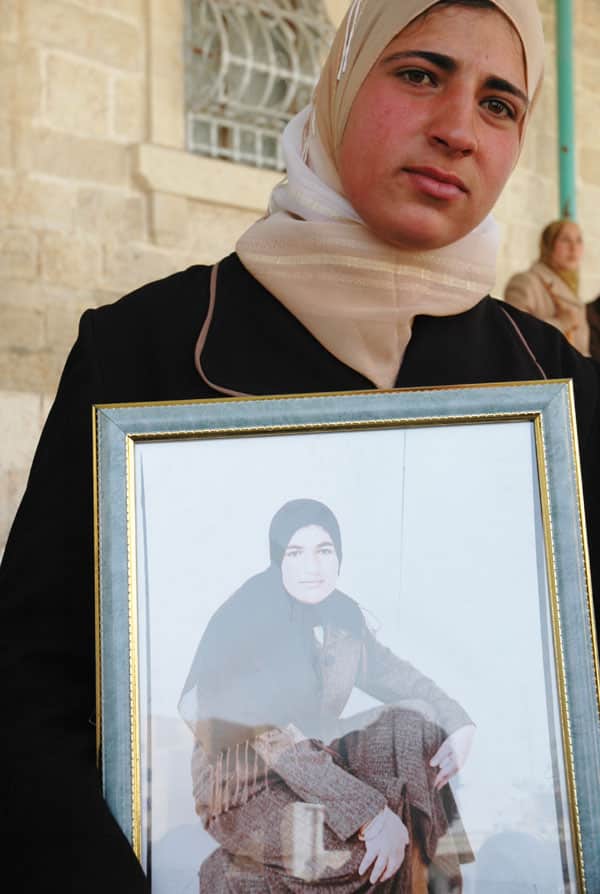 17 April 2005: A young woman holds a photo of her sister during a demonstration in Hebron in support of Palestinian prisoners.

As land confiscation continues to affect the agricultural sector through illegal settlement construction, Wall construction, and increased military presence in the region, even farming in the West Bank requires political engagement and, oftentimes, resistance. 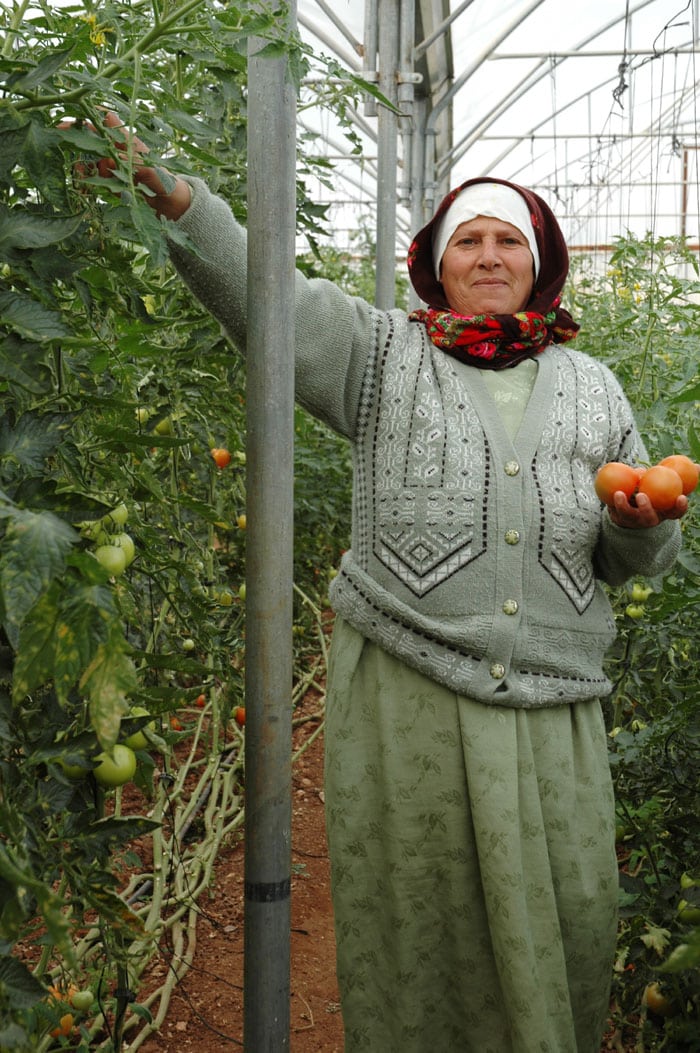 04 March 2005: A woman inside her greenhouse in Deir Ballut. 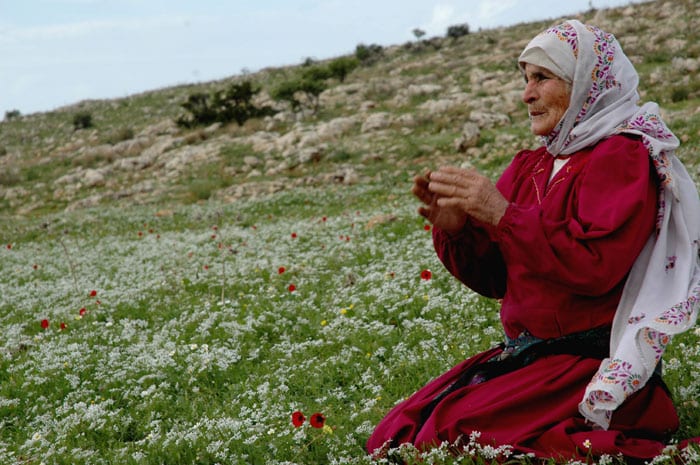 04 March 2005: A woman prays on land which will be isolated from the village of Deir Ballut by the Annexation Wall. 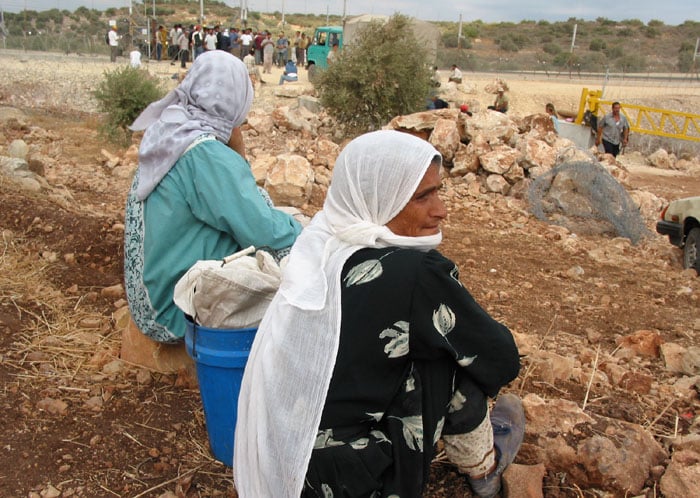 15 October 2003: In Jayyous Palestinians wait for the gate in the Annexation Wall to open to reach their olive groves and agricultural fields.

During the first Intifada, nearly 60% of Palestinian women actively participated in the national struggle against Israel’s occupation.  Whereas the Palestinian armed struggle involves participation from a very limited sector of society, nonviolent resistance enjoys the popular support of a wide range of Palestinians. 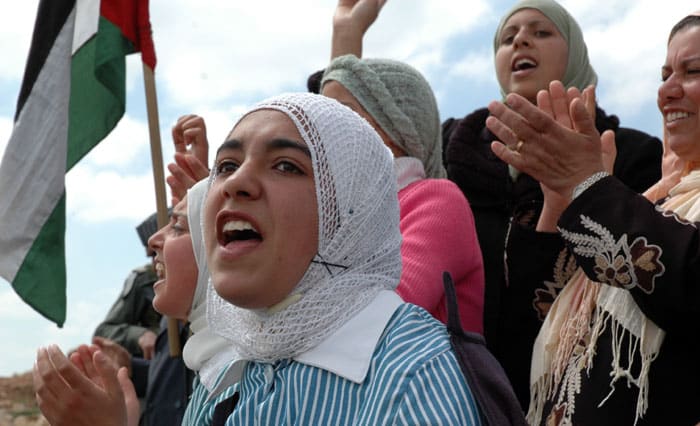 13 March 2005: In the West Bank village of Bil’in, Palestinian girls and women chant slogans in protest of the Wall Israel is building illegally on their land. 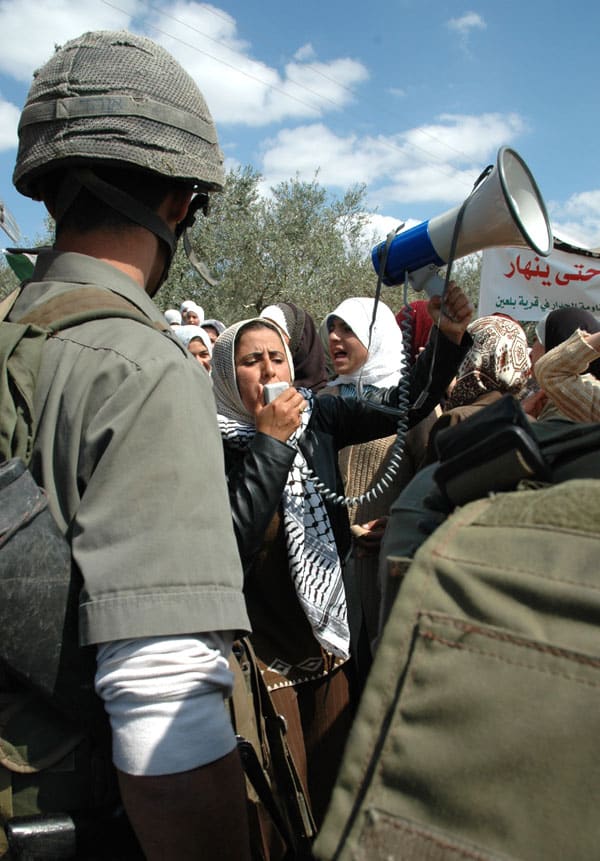 13 March 2005: A Palestinian woman leads chants during a nonviolent demonstration in Bil’in against the construction of the Annexation Wall.

In the 1980s, the illegal Israeli settlement Elkana was constructed on land confiscated from the West Bank village of Mas’ha.  When construction on the Annexation Wall began in Mas’ha in February 2003, Munira Amer, her husband Hani, and their four children were offered a choice: to allow their house to be demolished or to stay in their house and have the Wall built between their house and the rest of the village.  They now live in an effective box, under intense psychological pressure surrounded by the Wall, Elkana, and a military road with gates that can effectively lock the family inside their home. 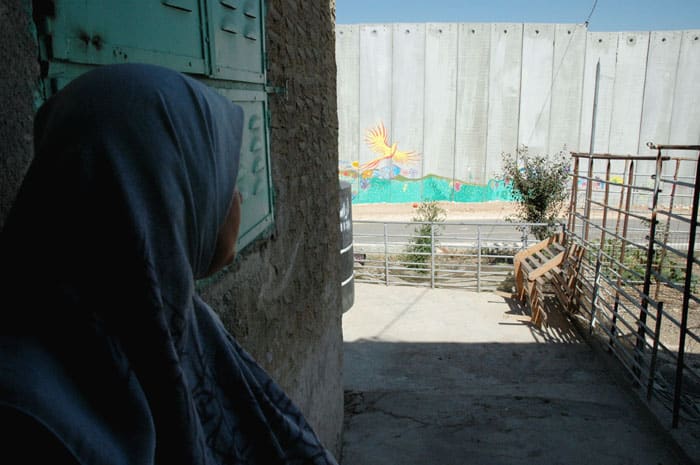 27 June 2005: Munira Amer looks at the Wall from the back door of her home which is now isolated from the rest of the village of Mas’ha inside the “Seam Zone” or the area located between the Wall and the internationally recognized border between the West Bank and Israel.

The discriminatory restrictions and disproportionate and collective punishment imposed on the Palestinians within the Occupied Territories have reached an unprecedented level, depriving Palestinians not only of their freedom of movement but also of other fundamental human rights, including the right to work, to medical care, and to education. 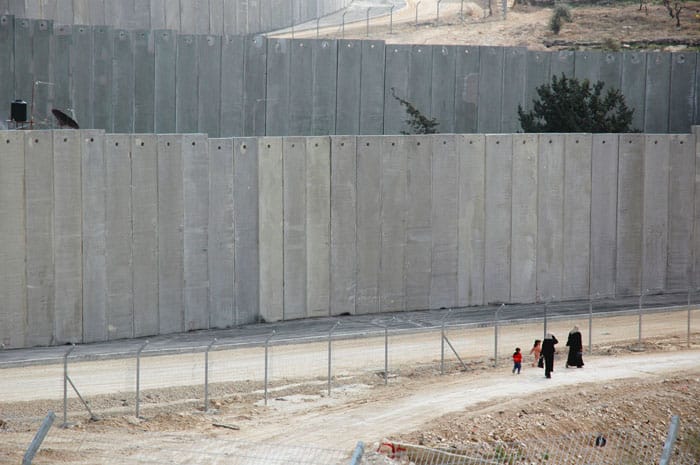 07 December 2004: Women and their children walk along the path of the Wall in Abu Dis. 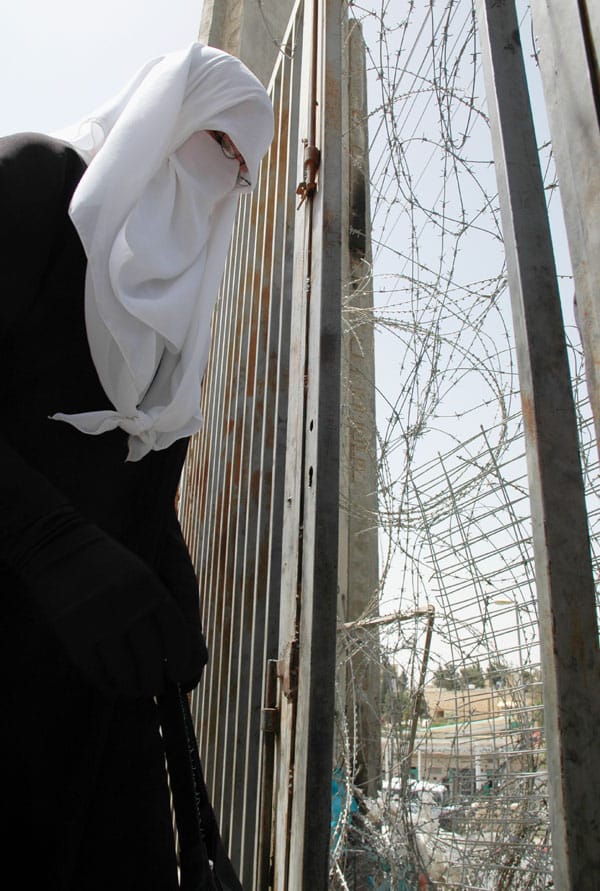 20 June 2005: A woman walks through an opening in the Wall crossing from one side of Abu Dis to the other.

Checkpoints and roadblocks, identification requirements, and travel restrictions and permission cage Palestinians inside a system under the control of the Israeli military.  The restrictions which have made movement between different parts of the Occupied Territories difficult or impossible have increasingly isolated women from their own families and support networks. 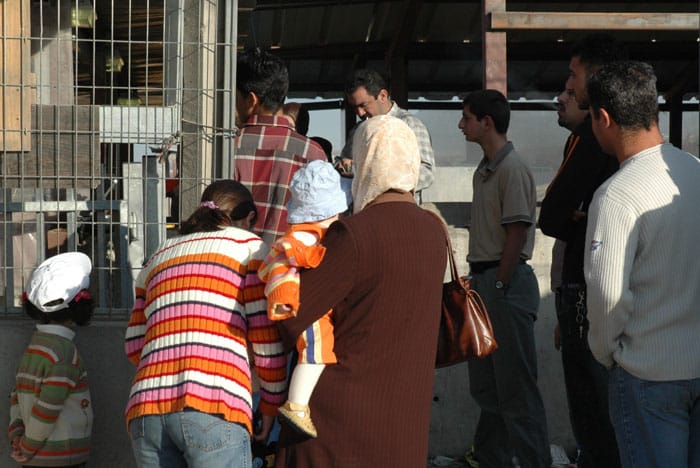 30 April 2005 A woman and her children wait for Israeli soldiers to return her identity card at Qalandia checkpoint. 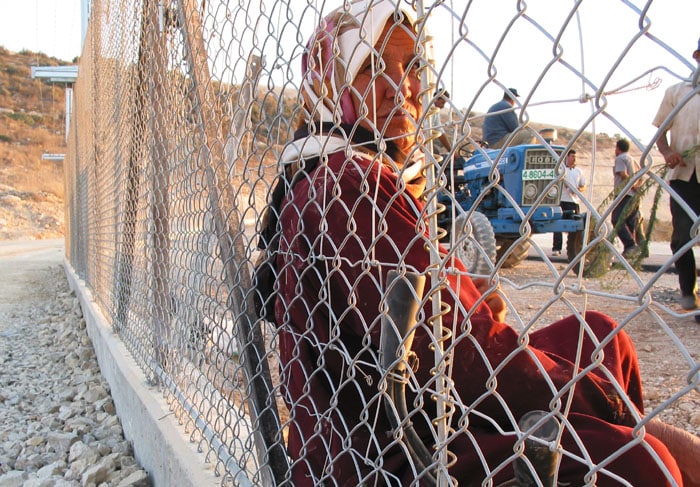 25 August 2003. A woman sits near the gate in the Annexation Wall waiting for Israeli soldiers to come to open the gate so she can return home.

Omar Akawi was one of 13 Palestinian citizens of Israel killed by Israeli police at the outbreak of the current Intifada.  The walls of the Akawi family home are full of photographs of Omar and posters of the 13 shaheed (martyrs) who were killed in October 2000. 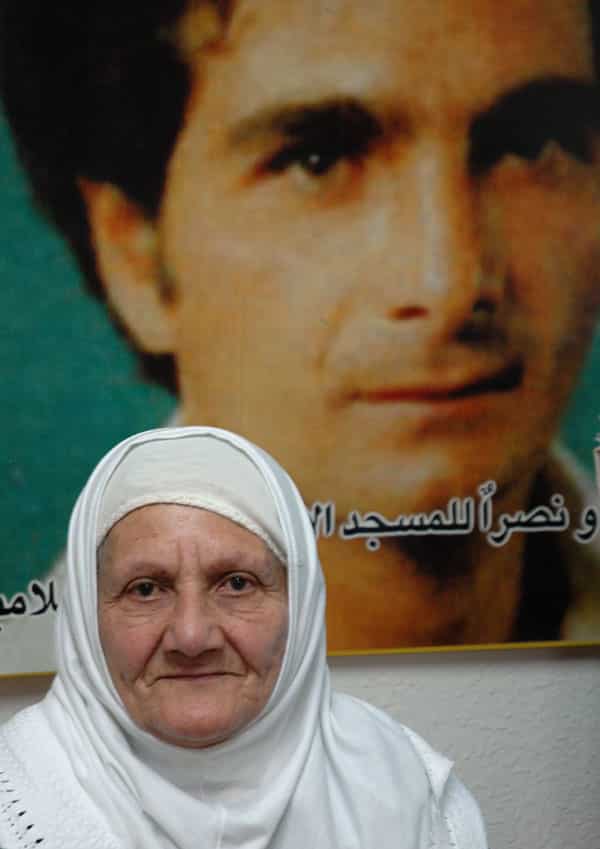 12 December 2004: A mother sits in front of a poster of her son Omar in her home in Nazareth. 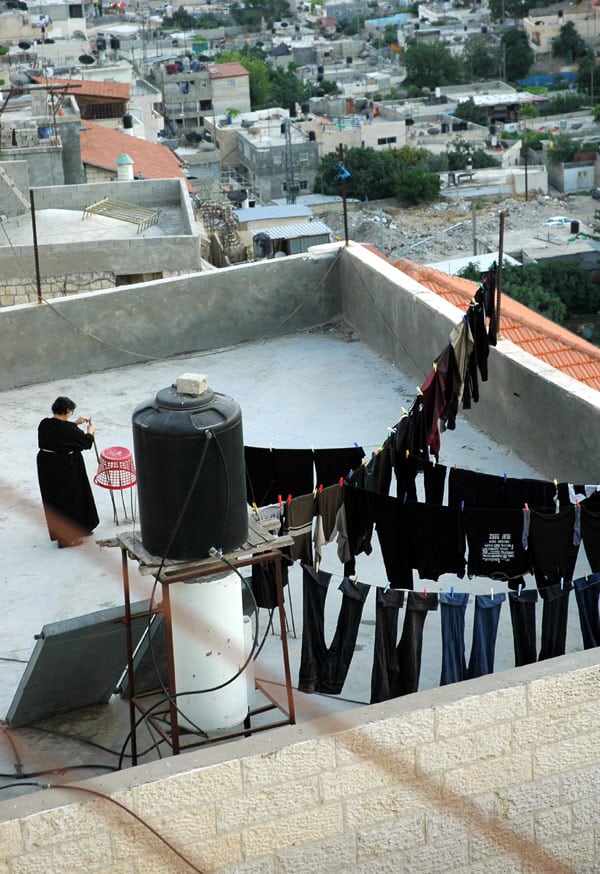 27 June 2005: A woman hangs her family’s clothes on the line in Silwan, a Palestinian neighborhood just outside the Old City in Jeusalem.

In the hills of South Hebron, Palestinian cave dwellers have been in a daily struggle for their livelihood in the last several years.  After the efforts to expel them from their land were temporarily blocked by a court order of the Supreme Court, the efforts taken by settlers and Israeli authorities took on a different form, that of daily harassment meant to force the dwellers to leave the caves in which they have been living for generations. 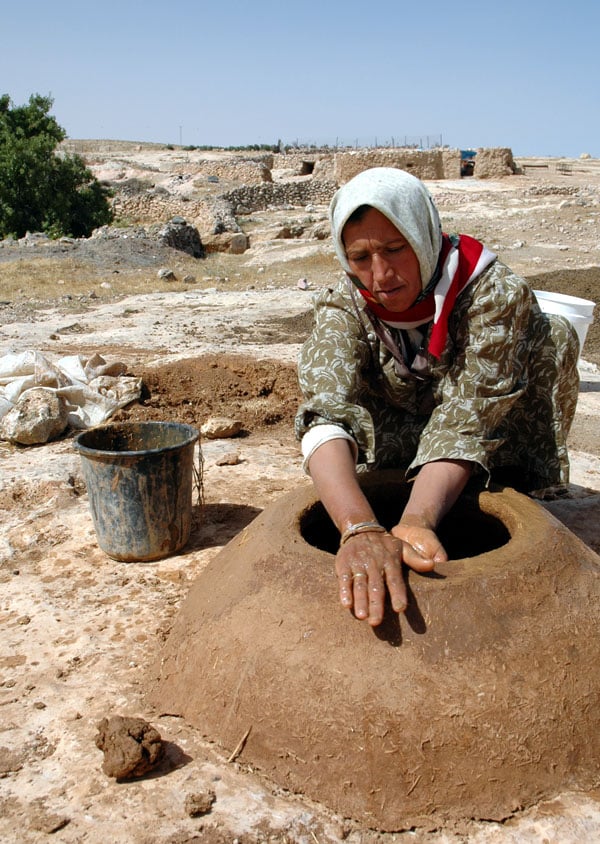 Photo 16. 07 June 2005: A woman in the community of Qawawis makes a taboun or an oven for cooking taboun (a traditional Palestinian) bread. 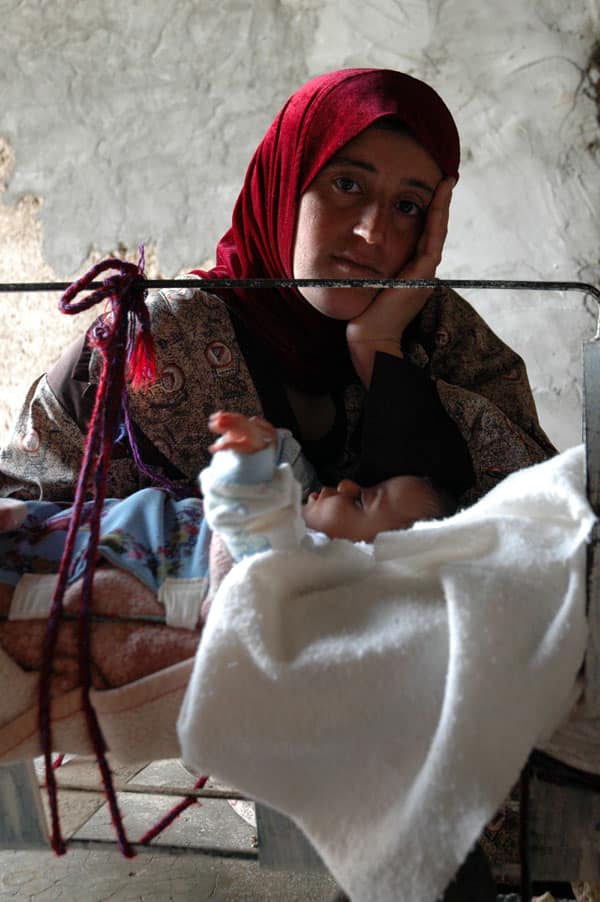 09 April 2005: In the only free standing home in the community of caves in Qawawis in the hills of South Hebron, a woman sits and rocks her baby. 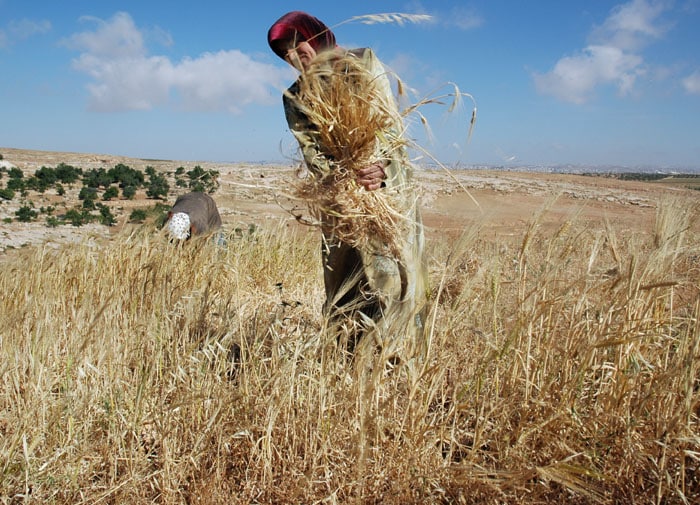 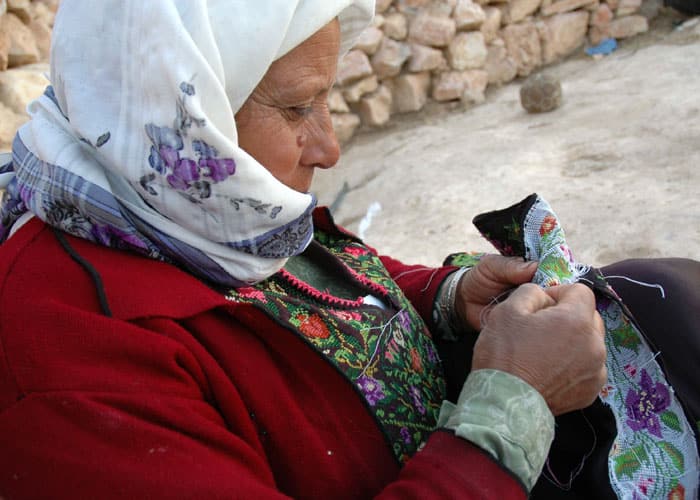 Over the last several years, Lisa Nessan has spent twenty-seven months in Palestine, working with Palestinians and Israelis struggling to end the Israeli occupation. Her observations on Palestine as well as more of her photographs are found at her blog: The Soul Unfolds Itself. All images by Lisa Nessan in this photo essay, as well as at her blog, are copyright protected. Reproduction requires the photographer’s
written permission. Contact Nessan at freckle@riseup.net about photo reproduction.