Although the corporate media gave a lot more coverage than usual to this year’s Vancouver rally, what they did provide was as inaccurate as ever.  A realistic crowd estimate for the Vancouver march and rally would be in the 3,000-4,000 range. Yet CBC Radio was running 500, The Province newspaper had 1000, and the TV network anchors were saying “hundreds” even though their reporters were saying “thousands.”  The Province listed Jinny Sims (BCTF) and Libby Davies (NDP) as two of three speakers at the rally.  Sims actually could not make it and wasn’t there; Libby was there but did not speak.  The long-time NDP MP did speak with Patrick Elie (who did speak in the rally but wasn’t mentioned in most print/radio accounts) and other Haiti solidarity activists after the rally.

So it’s the usual deadly mixture of malice and incompetence.

All of this to say that indy and alternative media accounts and  reports are very, very important, as always.  Below is an account put together by StopWar activists. 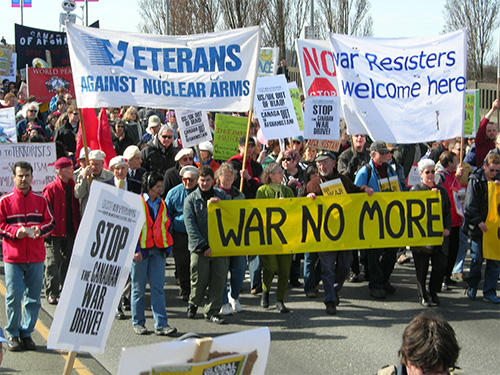 VANCOUVER, B.C. — Thousands took part in a rally and march, as  part of cross-Canada and worldwide anti-war protests marking the third anniversary of the Iraq war.  The Vancouver event, organized by StopWar.ca, began with demonstrators crossing the Burrard Street bridge and marching through downtown, ending up at the Art Gallery for a rally that featured musical acts Wandering Snowman and Solidarity Notes as well as a host of speakers.

Emcee Itrath Syed of the Palestine Solidarity Group welcomed the crowd, declaring that “this is what democracy looks like,” and emphasizing the importance of public demonstrations against the ongoing occupations of Iraq, Afghanistan and Palestine.  StopWar.ca co-chair Derrick O’Keefe added that the rally’s slogan, “War No More,” meant “not only war no more, but racism no more, torture no more, injustice no more, and Empire no more.”  O’Keefe also noted that the weekend marked another worldwide outpouring of anti-war sentiment, with rallies taking place in locations including Australia, Japan, Africa, Europe, Latin America and across Canada and the United States.

Elie, who is currently on a five-week speaking tour across the country, urged Canada to “stop exporting democracy,” noting that the pursuit of imperialist policies abroad was being accompanied by attacks on democratic rights at home.  A leader of the popular grassroots movement in Haiti and a former cabinet minister in the first democratic government of Jean-Bertrand Aristide, Elie is in the midst of a five-week speaking tour across Canada.

Dr. Thobani condemned Canada’s increasing military role in Afghanistan and said that the occupation there had nothing to do with bringing democracy and women’s rights, urging Canadians to say “Not in Our Name.”

Snyder, 22, was the rally’s concluding speaker, and his words  captivated the crowd.  The young resister, along with at least another 20 or so Americans, is seeking refugee status in Canada on the basis of his principled refusal to fight in an immoral war.  He told the crowd that he and the other resisters were not the cowards; rather, it was the dishonest army recruiters and the lying war-making politicians who were the cowards.  Many generations of war resisters took part in the day of action, including World War II and Korean Veterans Against War, Vietnam-era war resisters, and supporters of war resisters opposing the war in Iraq.

The Vancouver action was one of nearly 40 across Canada.

Derrick O’Keefe is an anti-war activist and co-editor of Seven Oaks, an on-line journal of politics, culture and resistance.