On April 30, 1970, Richard Nixon told the world that US forces were invading the country of Cambodia.  Within twenty-four hours of his announcement, the streets of many cities and towns around the United States and elsewhere were filled with angry protests against the US action.  On May 4, National Guard troops opened fire on protesters in Kent, Ohio, killing four and wounding many others.  Within days, the rock band Crosby, Stills, Nash & Young released the single “Ohio” about the murders at Kent.

A simple guitar lick opens the tune and then Neil begin singing: “Tin soldiers and Nixon’s coming/Four dead in Ohio. . . .”  The song is angry and direct.  So was the response to it.  While most stations played the tune, there were several that refused.  The single, which included the acoustic “Find The Cost of Freedom” on its B side, made it to the number 14 position on the charts.  One of the harshest reactions to the song occurred at the European studios of Armed Forces Network (AFN) — the radio network heard by US military and their dependents throughout Europe.  After a night DJ played the tune, he was removed from his deejay position, and the song was never heard again on AFN Europe that summer.  In addition, it was impossible to find at Post Exchanges in Germany.

Anyhow, Neil Young has done it again.  On March 29, 2006, he went into the studio with the same sense of urgency that moved the producers of the “Ohio” single, to record a new antiwar work called Living With War.  The CD should be in stores by May 15.  As a favor to fans and other interested folks, Young’s record company released it on his website for free streaming on April 28.

Click on the image to listen to Living With War 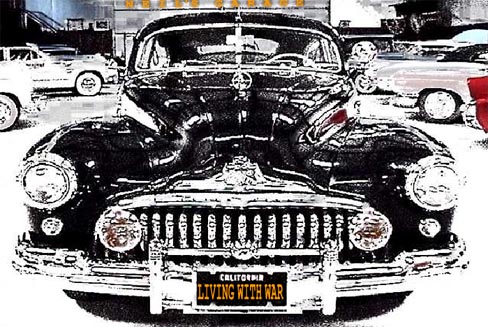 The first fuzzy bass tones came out of my speakers a little after 7 AM.  Then came Neil singing “Won’t need no/Won’t need no stinkin’ war . . . after the garden is gone. . . .”  That ever-so-recognizable Silvertoney sound that Young makes with his electric guitar plays a melodic arpeggio between and behind the lyrics — lyrics that appear at first to be as fuzzy in their meaning as the bass that is part of Young’s signature electric sound, but turn out to be as clear as his ringing guitar licks.

The next song that streams after the first track is a simple melody that describes our lives here in the mother country (or is it the Fatherland).  You know — watching the flat screen TV and just living with war everyday.  The body counts and the wounded boy or girl next door — just living with war.  That’s the price we pay for that overpriced flat screen TV and the right to buy it at Costco.  It’s not a cynical song, and it isn’t resigned, either.  It simply states a tragic fact.  Young is trying to get us all to do something to stop it.

Don’t need no more lies.  That’s the refrain of Young’s next melody.  Titled “The Restless Consumer,” the song opens with the observation that we can’t see those flag-draped coffins.  Why?  Because the spin machine doesn’t want us to.  Like everything else in this latest war (the war on terror, not just the one in Iraq), everything we hear is just another lie.  Terrorists and terror alerts.  WMD and democracy.  Don’t need no more lies.  Will the restless consumer get tired of the lies and do something about it?  That’s what Young seems to be asking here.

“Back in the days of Shock and Awe.”   So begins track four: “Shock and Awe.”  It’s a lament for the dead.  It’s a lament for the nation’s dead soul.  It’s a wailing at the wake of so many Iraqi children.  The music here is defined by the trumpet that plays the melody.  A melody that could be the tune of one of those rhymes children make up when they’re skipping rope or playing tag.

Curtis Mayfield once titled an album of his Back In the World.  The “World” is what GIs called the States when they were overseas, especially in a war zone.  Neil’s next song is titled “Families.”  Family values that ring true, like when a soldier writes that he (or she) is coming back to you.   It’s another part of war that only soldiers and their families know.  Longing and wondering.  Children, unseen, growing older without their soldier-parents.  Some born while their parents die overseas in a war that has no meaning.  When your family is stateside, that’s where the world is.

“Do you think that you believe in yours/More than they do theirs now?”  That’s a lyric from the song “Flags of Freedom.”  Flags on Main Street and sons going off to war.  The tune is borrowed from Bob Dylan’s “Chimes of Freedom,” but the hope implicit in Dylan’s song is not here.  All that’s left is the cynical world that Dylan hoped to overcome.  The world that we all hoped to overcome.  Is there still an answer blowin’ in the wind?

The next song is the single.  It is the clarion bell.  It is the first chime of freedom.  Impeach the President.  That’s what Neil titles this one.  It begins with a trumpet playing Taps.  Nothing held back.  It’s a call to arms from a poet to throw the pretender out.  Get the sonuvabitch out of there.  Let’s impeach the president . . . for lying us into war.  Let’s impeach the president . . . for spying on us all.  Let’s impeach the president for hijacking our religion . . . and using it to get elected.  This is the song that got the attention of FoxNews — the Information Bureau of the Great Leader.  The Italians strung up Mussolini and then told each other: Kick him until you’re sure he’s dead.  No one’s calling for that, but there’s plenty calling for impeachment.  It’s time to bring him down.  And make sure we take Cheney with him.  Otherwise it’s no victory.

Then what?  What if we did get rid of Bush and Cheney?  Who rules?  Neil knew better than to leave us hanging.  “Lookin’ For a Leader” is the next song.  He runs through a litany of names and rejects them all.  Maybe Obama — no, I guess not.  Maybe Colin Powell — he could make up for the lies he told?  The ones that helped bring us to where we are.  Never mind.  This is the weakest song on the album politically, but only because Young names some names.  He’s right about the need for a new direction, but the names he lists are not the ones to look at.  He’s right when he says America has a leader, who is not in the House but walking among us.  He’s right when he says that leader needs the great spirit on his or her side.  We have sunk into the darkness that Hunter S. Thompson described so well when he was alive.  The abyss of fear and loathing.  Of corruption and death.  Where good is evil and evil is placed on the altar in the temple of the powerful.

This past December, a very good friend of mine died in a tragic fire.  He was fifty-three.  We had just got back together after a decade or so of being in touch only rarely and then via the phone and US mail.  My buddy was a Navy vet from the Vietnam period.   He joined the Navy out of high school so that he wouldn’t get drafted into the Army (his lottery number was sure to get called that year and the war was raging).  He spent a year and a half off the coast of southern Vietnam.  While on the USS JFK carrier, he contracted Hepatitis C from some chemicals he worked with.   At least that’s what the VA doctors told him.  The Hep C was only exacerbated by the lifestyle he temporarily assumed when he came back.  A lifestyle that many vets took up for some period of their return — if only to forget what they saw and did.  When I saw him a few weeks before he died, we talked about music, books, old friends, and the world in general.  Our plan was to go to some shows this summer.  Then the fire struck.  I only tell you this because the second-to-last song on Living With War is about a friend of Neil’s who died in Vietnam.  It’s this man and all the other vets of US wars of Empire that are the muse for this album.  Their deaths are the inspiration for Neil’s angry music and pointed lyrics.  Men and women who underneath it all were believers in the ideals for which they were told — frickin’ lies — they were fighting.  Many of those men didn’t physically die in Vietnam, but they died there just the same.

Can we get those ideals back?  Neil, the eternal optimist, believes we can.  That’s why he ends the album with “America the Beautiful.”  He is much more of a believer than me, but more likely closer to the majority of the residents of this country.  The music on this album is classic Neil Young.  Electric but not flashy.  Driving rock that makes you sing.  If I drove a car, this is the kind of music I would want in my player as I drove on the Interstate across the land.  Short songs that you know will be extended and tear up the aisles when they’re performed live this summer when Crosby, Stills, Nash & Young reunite for their “Freedom of Speech in 2006” tour.

This is more than a rock album.  It’s a all to arms.  Listen!  I wonder if AFN will play it.  Or Clear Channel.