Malik Rahim is a longtime activist and co-founder of Common Ground.  Founded last September, Common Ground is a grassroots collective that has provided 80,000 people in and around New Orleans with legal, health, bio-remedial, immigrant, and eviction defense services.  See www.commongroundrelief.org.

Q. Eight months after Hurricane Katrina, what do you see as the most pressing problems facing people in New Orleans?

A. The biggest is housing. We know now that the trailers provided by FEMA are a joke.  They cost close to $35,000 each to purchase and be assembled for a family to use.  Yet these trailers won’t even withstand a tropical depression or any winds above 40 miles per hour.  We’d have to get out of these trailers.  Where will these folks be housed?  Thousands of trailers would be flying around.  Placing all these trailers in a hurricane-prone area was insane.  There was so much more that could have been done with that money.

The other big problem is crime.  Crime is on the increase here in New Orleans.  We are still trying to arrest or prosecute our way out of crime, and it’s not working.  We need to have programs.  Right now I would say the main cause of crime is depression.

You have people here under this kind of stress after coming back and losing everything.  We’re seeing an increase in domestic violence, so the need for safe shelters for women is crucial.  Drug and alcohol addiction are on the rise.  Right now I don’t believe the city is even operating a drug treatment center.

A. Some schools are open and functioning.  The city is doing well economically in the sense that there are plenty of jobs.  There is a shortage of workers here unlike anywhere else.  We probably have almost zero unemployment.  If you want a job and can find a place to stay, you can get a job here in New Orleans.

But half of the people in the City have recovered and they really don’t give a damn about the other half.  Their lives are back in order and that’s all that counts to them.

Q. What is your assessment of the policies and actions of the federal, state, and local authorities toward the disaster and its survivors?

A. I see the federal, state and local governments as absent.  But in the community-based grassroots organizations, I see the essence of America.  The things that they are doing are phenomenal.  If the government would work with the grassroots organizations, we could have a whole army of volunteers here in this city over the summer.  But they refuse to make a call or to assist those who are doing so.

At the current rate, things are getting worse, not better, as it relates to our wetlands, to establishing emergency shelters, cleaning out homes, removing the debris.  We need an army of students and other volunteers to come help do these things.

Q. Tell us your views about the recent mayoral election.

A. I believe that it showed that the African American community will not give up despite the attempt at mass disenfranchisement.  I did not support Ray Nagin, but that’s who the majority of people have chosen to be the mayor.  So whatever ill feelings I have about Nagin I have to place to the side, because that’s our mayor and I will have to support him.  We are not here to just have an adversarial relationship with him and his administration.

We are going to be critical and try to highlight some of the things that we think are the most important in bringing the city back together — like I said, housing, education, crime abatement, recreation, schools.  But these are things that not only he, but the entire City Council, our entire state, need to get behind.

The problems of New Orleans are enormous.  It’s going to take the entire City to make the federal government do what they are supposed to do.  We can’t just depend upon them.  We need a working collaboration, one that is led by Nagin’s administration, but a broad working collaboration.

We have positive relations with the majority of the City Council members in that their offices are open to us and they understand that we are here to help people who are in crisis.  We have a real good working relationship with four of the seven Council members, especially with two newly elected members, James Carter and Arnold Fielkow.  They are willing to sit down and explore innovative ways of dealing with old problems.

Q. What is the mission of Common Ground and what are its main activities?

A. Our main purpose is to offer assistance to anyone or any community caught in the same dilemmas from the hurricane, whether national or natural disaster.  Our collective is based upon environmental justice.  There cannot be social justice without environmental justice.  If we don’t save our environment, it doesn’t matter what rights we have.  If we can’t breathe the air and drink the water, we’re doomed. 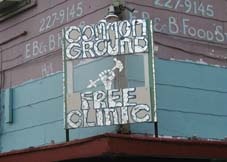 Since our inception last September, we have served almost 80,000 people with a variety of services.  We have served over 50,000 in New Orleans alone, and the rest in many different parishes in and out to the bayou, even Gretna.  We operate three health clinics and are in the process of opening a couple more.  Our health clinic offers no-cost or low-cost, high-quality health care.

We have a legal clinic and an eviction defense clinic.  We have an immigrant workers’ program.  We have a bio-remediation and a gardening program, and we are still doing food distribution.  We are gutting out homes and we are just being there for the residents.

We have about 300 people working in our projects.  There are no paid people at Common Ground.  None.  We take care of housing and food for all volunteers, but no one is paid.  We try to make the living conditions for our volunteers as good as what the people who live here have.  But coming to New Orleans and volunteering with Common Grounds is not going to the Ritz Carleton.  We spend about ten percent of the resources we receive on that and the rest, 90 percent, go to direct service.

Q. How do you deal with the environmental issues in some of New Orleans’ neighborhoods, especially those that are really located badly from an environmental point of view?

A. It’s up to the communities.  We follow their lead.  If they want to build, we want to show them other alternatives about how to build.  We want them to have sustainable options.  What we’re saying is that we can’t just look at past ways if we are going to survive in the future.

If your house received eight feet of water, then maybe when you rebuild you ought to raise your home twelve feet.  Maybe you need to understand the need to clean all the toxins out of your home; to get rid of all of the pesticides that you have under your kitchen cabinet or in your garage.  Maybe you should look at planting trees to keep your home cool.

There are ways that we can live within this area, regardless of whether it is prone to flooding.  We need a new way of living.

Q. What are some of the most important things people from outside the Gulf area can do to help Katrina survivors?

A. People need to be coming here because almost seventy percent of the American population lives in flood prone areas.  Look at the floods in New England now.  So people need to come down here and learn the skills that can be used for first responding.  It’s not only New Orleans that’s in harm’s way this hurricane season.  Even New York can be hit by hurricanes.

The main thing is to develop ties throughout the hurricane region so we can assist each other.  How can we work with New York to make sure that, if New York is threatened with a hurricane, people can come to New Orleans and other places to find safety.  How can we develop a mechanism to work together?  Can we establish teams of ten in every community that can prepare themselves to work together to assist in case of emergency?

* To volunteer with or contribute to Common Ground, visit www.commongroundrelief.org or speak to Kone at 504-368-6897. 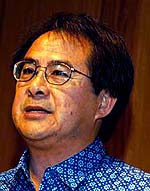 Bob Wing is an Oakland Bay Area based activist and writer. His publications include “Crossing Race and Nationality: The Racial Formation of Asian Americans, 1852-1965” (Monthly Review 57.7, December 2005); “Ruin, Rubble, and Race: Lessons on the Centennial of the Great San Francisco Earthquake and Fire of 1906” (MRZine 21 April 2006); and “Hating Barry Bonds” (MRZine 11 May 2006).