The emergence of Arab art in New York City has surprised many.  Most importantly, the Made in Palestine exhibit, which opened at the Bridge Gallery in March of 2006, drew large crowds.  The battle of bringing the show to New York, however, was no surprise.  Fearing a strong backlash from the pro-Israel community, galleries and studios refused to show the exhibit.  Still, the independently-funded gallery forged ahead and won critical acclaim in the New York Times and Time Out.  The Made in Palestine exhibit closed last week, only to be followed by an equally moving and controversial exhibit.  Three Arab Painters in New York opened on June 3rd and will be on display until June 24 at the Bridge Gallery.

It is not that the three Arab artists featured in the exhibit, Samia Halaby, Sumayyah Samaha, and Athir Shayota, intend to be controversial.  But the wars that consumed their countries and the atrocities inflicted upon their people constitute a grim reality; and the West’s perception of the wars and its dehumanization of suffering peoples of their countries have led to the Western characterization that Arab art is by nature controversial.

Many works on display at the Bridge were certainly influenced by the culture, politics, and conflicts that encompassed these artists’ surroundings, but their main impact is to humanize the Other, i.e. those who are made out to be the opposite of the Western Self.

World-renowned Palestinian artist Samia Halaby has been integral to pushing forward the underground art movement in New York City and creating a platform for independent artists.  The gallery’s curator, Maymanah Farhat, wrote: “Her dedication to the self-determination of colonized peoples has led Halaby to explore creative venues that surpass the rigid boundaries of the mainstream art world.”  Halaby’s work featured at Three Arab Painters in New York focuses on the Kafre Qasem Massacre of 1956 by the Israeli military, which claimed the lives of 49 Palestinian men, women and children.  Halaby extensively researched the massacre, meeting with the surviving residents of the village, examining written documentation, and studying photos of the massacred.  In “The Ninth Wave of Killing,” Halaby depicts — through the use of conte crayon — an instance when, in Halaby’s words, “sixteen women were shot over and over again until only one survived.  The sole survivor was in the center of the big hug that the women created as they were being shot.” 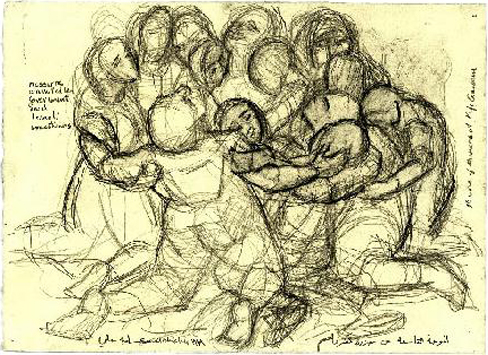 Farhat further explains: “Some called this event in the massacre the ‘Dance of Death’ because when the shooting began the women came together and began to rotate slowly as the bullets hit them.”  Halaby’s depiction of the massacre captures the chilling dance, thrusting the viewer into the world of the victims of Israeli occupation.  A testimonial — on the wall next to the “Dance of Death” — from one of the survivors of the massacre describes the trauma: the losses of friends and co-workers, the screams of the slaughtered women, the pain of visiting their graves decades later, and the tears that still fall from his eyes when he thinks of the massacre.

The Lebanese-born Sumayyah Samaha has been active in the independent New York art scene since the late 1970s.  Samaha co-founded the 22 Wooster Gallery in 1978 and remained involved in the gallery for the next ten years.  Samaha’s recent art has been inspired by the conflicts engulfing the Middle East: more specifically the second Palestinian Intifada, the US occupation of Iraq, and the political unrest in Lebanon.  Samaha recently contributed to anti-war exhibits such as Why War, Why Dubya?, WAR ART, and Defiance and War Culture.  About her work entitled “Israel/Palestine Fence,” one featured in Three Arab Painters in New York), Samaha states: “The work tries to convey the humanity of a people with a rich history and a culture that continues to thrive despite the harrowing conditions under which they live.  They are writing poetry, making music and singing songs about love, pain and hope.”  Samaha masterfully integrates words of poetry into the background of many pieces in “Israel/Palestine Fence” — including a moving one that features a poem by Palestinian poet Suheir Hammad. 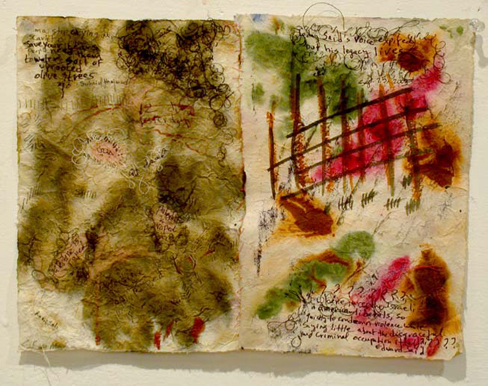 In her ceramic work — “The Fifth Crusade” — Samaha uses nails 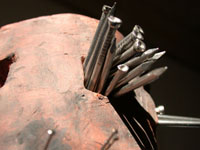 to represent the violence of George Bush’s “crusade” into the Middle East.  The ceramics in “The Fifth Crusade” depicts George Bush’s “calling” and the tragedy that ensued as a result of the “war on terror.”  Farhat summarizes Samaha’s collection of art on display: “Through such works as Mausoleums, Israel/Palestine Fence and Fifth Crusade Samaha forces the public to take a pensive look into the issues that can longer be ignored.”

Deeply involved in the US art scene since the late 1980s, Iraqi artist Athir Shayota was instrumental in organizing exhibits outside mainstream art spaces in Detroit up until 1997.  Shayota took on culturally and ethnically diverse projects, organizing exhibits with painters like Richard Ellington Lewis and involving himself with the Cultural Arts division of Access (Arab Community Center for Economic and Social Services).  Following his move to New York City in 1997 and the illegitimate invasion of Iraq, Shayota became politically motivated.  He writes: “I began to spend much of my free time protesting war, attending peace vigils and leafleting around the city.  Not only had the Iraqi people suffered under a monstrous regime, they were also subject to the slaughter of the Gulf War in 1991, as well as the genocidal sanctions that followed.  Today it continues with more war and occupation.”  Shayota’s oil paintings on display at Three Arab Painters in New York use Western style and imagery to appeal to the viewer on a familiar ground.  Farhat reveals the viewer’s internal dilemma: “The viewer faces difficulty in placing these new images of Iraqis into the subordinate categories of representation that have dominated American consciousness, and are continuously reinforced by media stereotypes.”  Shayota’s works “Tarik and Athir” and “Battaween Meats” stage a complex encounter between the viewer and Tarik, a close friend of the painter’s: “He looks away in both paintings and it is clear that although aware of the viewer, he is not much concerned about him.” 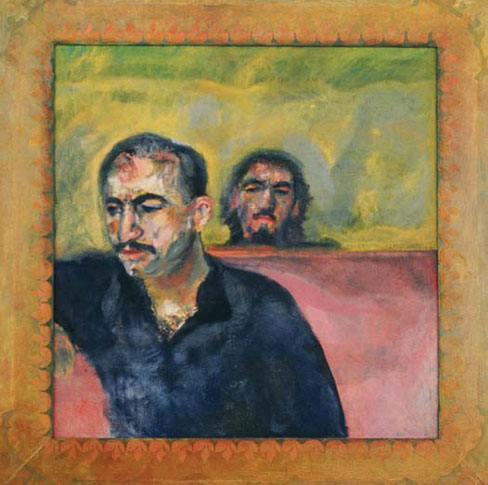 In Shayota’s recent paintings, Farhat writes, “those depicted reflect the violent world which they live.  In one painting the door opens but slightly, revealing half a head uncomfortably gazing at the viewer in front.  In another, a self-portrait with an umbrella, no rain appears and the red background leaves all narrative ambiguous.”

The Bridge Gallery is located on 521 W. 26St. (between 10th and 11th avenue) in Manhattan.  The gallery is open Tuesday through Saturday from 11 AM until 6 PM.  For more information visit www.AlJisser.org.

All quotations that appear in this article were from the Three Arab Painters in New York exhibition catalog and are copyrighted to Maymanah Farhat and Al Jisser Group.

Remi Kanazi will be hosting and performing at the Poetic Injustice Poetry Show at The Bridge on Wednesday June 14 at 7:30 PM.  He is the primary writer for the political website www.PoeticInjustice.net  He is a Palestinian American freelance writer, poet, and performer in New York City and can reached via email at remroum@gmail.com.