You have been a weak president, despite your strutting and barking, when it comes to doing the right things for the American people within the Constitution and its rule of law.  This trait is now in bold relief over the Israeli government’s escalating war crimes pulverizing the defenseless people and country of Lebanon.

With systematic efficiency, the Israeli government has already destroyed innocent homes and basic public facilities — ports, airports, highways, bridges, power stations — which are critical to delivery of food, medicines, health care, ambulances, water and other essentials for a civilian population.  This bombardment — by U.S.-made bombers, military vehicles, ships, and missiles, with American taxpayer subsidies — places an inescapable responsibility upon your shoulders which does not mix with your usual vacuous messianic rigidity.

As the leading player in official Washington’s puppet show, it is time for you to assert the interests of the American people and those of the broad Israeli and Palestinian peace movements, by standing up to the puppeteers.  For without this conflict, Hezbollah would not be in today’s news.

The time has come for you to return to Texas for a private meeting with your father, his former national security advisor, Brent Scowcroft and his former Secretary of State, James Baker.  You need to say to them: “I can’t trust my advisors anymore; there have been so many tragic blunders.  What do you advise me to do about the destruction of a friendly nation by the world’s fifth most powerful military?”

Here is what I think they should say to you:

1. Take personal command of an immediate rescue effort for the tens of thousands of Americans trapped in Lebanon by Israel’s calculated blocking of air, land, and sea escape routes.  You’ve said the safety of Americans is your top priority.  Prove it by using the U.S. Air Force and the U.S. Navy facilities to immediately evacuate all our people desperate to escape the terrorization of Lebanon.

2. You have been so docile and permissive to Israeli demands that any modest deviation from this posture will make your next move credible.  Announce that you are sending two prominent negotiators — perhaps James Baker (Republican) and former Senate Majority Leader George Mitchell (Democrat) — to Israel and Lebanon to arrange for a ceasefire between the combatants.

Announced at a televised White House news conference with your two envoys, you can punctuate your seriousness by raising the questions of violations of the Arms Export Control Act and the Foreign Assistance Act.  Using U.S. supplied weapon systems to commit civilian atrocities on homes and fleeing vehicles with children and to inflict collective punishment on mass civilian populations is not using these weapons for legitimate self-defense and internal policing, as our federal law requires.  Israeli planes have even fire-bombed wheat silos and gasoline stations in Lebanon.  More mayhem is on the way.

3. Stop acting like an impulsive, out-of-control West Texas Sheriff and start reading, thinking, and listening for a change.  When Israel, Britain, and France violated international treaties against aggression in 1956, and invaded the Suez Canal, President Dwight Eisenhower used his influence to make them withdraw from Egypt.

In 1982, following a year without any PLO skirmishes over the Lebanese-Israeli border, Israeli armed forces invaded Lebanon anyway.  They created a path of destruction all the way to Beirut and militarily occupied south Lebanon for 18 years before they withdrew, except for retaining Shebaa Farms.  In 1982, the New York Times reported “indiscriminate bombing” of Beirut by Israeli planes.  At least 20,000 Lebanese civilians lost their lives in that invasion and many more were injured.  From that conflict Hezbollah was born, composed of many people whose relatives were casualties in that illegal invasion.

History, George, does not start two weeks or two months ago.  You must read about past U.S. Presidents who, at least, sent high-level emissaries to quell similar border fighting.  It worked and prisoners were often exchanged.

You are doing and saying nothing about what the rest of the world believes is a hugely disproportionate attack against innocent adults and children in violation of the Geneva Conventions, the UN Charter, and other treaties and federal statutes.  You’ve sworn to uphold these laws.  Do so.  Because of the Israeli government’s overwhelming military power, the imbalance of terror against civilians and their property has always been to its advantage.  As has its occupation of Palestine and confiscation of land and water sources.

4. You can’t take sides and be an honest broker.  Just about all our knowledgeable retired military, diplomatic, and intelligence officials believe resolving the Israeli-Palestinian conflict is the key to deflating other agitations in the region.  Freedom and justice for the Palestinian state and security and stability for the Israeli state must both be achieved.

You have turned your back on the courageous and prominent Israeli peace movement which normally reflects the positions of half of the Israeli population.  You’ve never met with any of its leaders — even those in the Knesset or former officials in the military, intelligence, and Justice Ministries.  Hundreds of reserve combat officers and soldiers of the IDF have refused, in their words, “to fight beyond the 1967 borders to dominate, expel, starve and humiliate an entire population.”  They pledged only to fight for Israel’s legitimate defense.

5. Once in a while, ask your aides for a sample of Israeli opinion that rejects the notion that there can be a military solution to this conflict, despite the military imbalance.  For example, reports and editorials in Haaretz, arguably the most respected newspaper in Israel, would educate your judgment.  In a recent editorial, Haaretz argued that the present Israeli government has “lost its reason” through the brutal incarceration, devastation, and deprivation of innocent people in Gaza.

6. One final bit of advice could come from Papa Bush’s circle.  If the Israeli army decides to invade Lebanon with troops, your support of the aggression can possibly unleash a domino of warring actions and reactions over there.

As is it, Americans are increasingly fed up with the Iraq quagmire.  Moreover, we know they don’t like many of your domestic policies favoring the wealthy, the post-Katrina debacle, exporting jobs, and among our conservative base, your enormous deficits.  So our Republican Party’s control of government is at stake in November.  Don’t you have your hands full with Iraq whose invasion we all urged you to avoid in 2003? 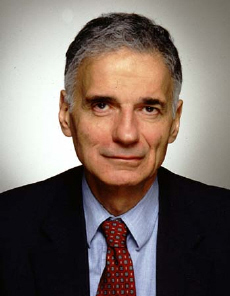 Ralph Nader, a son of Lebanese immigrants, was born in Winsted, Connecticut on 27 February 1934.  He is a consumer advocate, lawyer, and author.  In his career as consumer advocate, he founded many organizations including the Center for Study of Responsive Law, the Public Interest Research Group (PIRG), the Center for Auto Safety, Public Citizen, Clean Water Action Project, the Disability Rights Center, the Pension Rights Center, and The Multinational Monitor (a monthly magazine).  Nader has run for President of the United States three times (with Winona LaDuke on the Green Party ticket in 1996 and 2000 and with Peter Miguel Camejo in 2004) in order to challenge the power of bipartisan plutocracy in the United States that exploits Americans at home, oppresses others abroad, and destroys the environment worldwide.  The letter originally appeared in his Web site Nader.org on 17 July 2006.