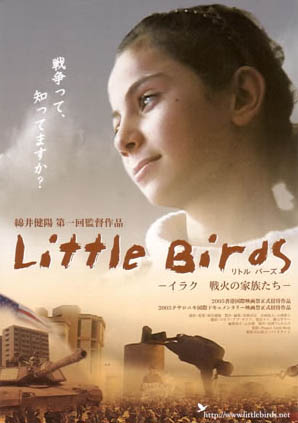 At a time when the Iraq war continues to be a defining issue on the American scene, it is ironic that the most powerful and uncompromising documentary on the subject remains almost entirely unknown and unseen in this country.  It took Japanese filmmaker Takeharu Watai a year and a half to film more than 123 hours of footage in Iraq, which he managed to edit down to two unforgettable hours.  The result is the stunning Little Birds, which plunges the viewer into the middle of the war, in all its sorrow and horror, and never lets up.

The film opens on the streets of Baghdad, just days before the war.  Daily life appears ordinary on the surface, but this is belied by an underlying tension as Iraqis express their thoughts on the impending assault.

It is not long before bombs and missiles are raining down on Baghdad, and the violence is all the more shocking for the scenes of normality that preceded it.  In contrast to the sanitized images the Western public has been fed, this documentary takes an unflinching view of the war.  Homes are destroyed, civilians are torn apart by bombs, and blood is spattered everywhere.  A man opens a shed, pointing to the bodies within, and bitterly comments, “So these are the weapons of mass destruction.”  As flies swarm over the bodies, he asks, “Are they weapons of mass destruction?  Is it a biochemical weapon?  Why?”

U.S. tanks and vehicles enter Baghdad, and a spunky young woman confronts the soldiers by demanding, “How many children have you killed today?”  This woman, who was a member of the Human Shields, tells the soldiers that she was there as a peacemaker.  One soldier insists that they are the peacemakers, and in disbelief the woman responds, “You’re a peacemaker?  When you kill these innocent children?  That’s a peacemaker?  Have you been to the hospitals?  Have you actually had a look at the people in the hospitals, dying and dead?”

In the next moment, the camera is racing into Thawra Hospital and turns into a room where we are confronted with scenes of such devastating intensity that it is almost unbearable to watch.  In this, perhaps the most emotionally wrenching scene I have ever witnessed on film, the criminality of the war is there for all to see, among the dead, the dying, and their grief-stricken relatives.

It is in this hospital that we first meet Ali Saqban, in his blood soaked shirt, as he vainly tries to aid his dying daughter, five-year-old Shahad.  Two of his children had already been killed in an American air strike on his home earlier in the day, and Shahad would not long survive.  Ali is one of main characters whose lives the film follows in the months after the invasion.  He painfully struggles to regain some sense of normality in his life despite extraordinarily tragic circumstances.  The film is richer for the time spent on the daily lives of ordinary Iraqis, and we begin to see the war through their eyes.

We are introduced to victims of American cluster bomb attacks, including a young girl with shrapnel embedded in an eye. “We don’t kill innocent people,” insists an American soldier at one point in the film, but everywhere the evidence contradicts him.  Cluster bombs, anti-personnel in nature, could have no other result than to kill innocent people, dropped as they were in residential neighborhoods.

Contrary to claims made by the Bush Administration that Iraqi civilians would greet American troops as liberators, we instead see tanks and vehicles rolling down deserted Baghdad streets, as residents nervously watch from their windows.  Later, the film takes us to several mass demonstrations in opposition to occupation, in which the sweeping passion of the people’s anger and outrage is only magnified by the death and destruction we have witnessed. 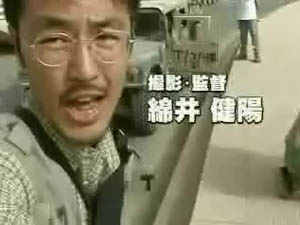 It is interesting to observe the comments by U.S. soldiers.  There are the true believers, parroting the pro-war line, but others, sensitive enough to recognize that reality is at variance with it, are clearly uncomfortable with the filmmaker’s direct questions.  “They don’t understand why they are in Iraq,” explained Watai in an interview.  “They say ‘to liberate the Iraqi people or help them,’ but they are just saying that.  It’s not from deep in their minds.”

“War is a disgusting word,” Ali Saqban says near the end of the film in a touching and eloquent pouring forth of his thoughts.  We yearn to see Ali and the others live again in peace, but the striking final scene jolts us back to the realization that the Iraqi people must continue to endure the hell brought to them by the Western powers for a long time to come.

American documentaries tend to be more interested in telling us about Americans in Iraq and informing us of what we already know.  Watai, however, has a more empathetic approach, forcing us to acknowledge what the war has done to the Iraqi people.  As a result, we discover far more about the war and the disaster it has wrought on the society.  The filmmaker had confidence enough in his material to forgo music and narration, and indeed, none was needed.  Little Birds is a film of such power that it leaves its audience speechless at the end.

It is a shame that this brilliant documentary remains without distribution in the U.S., and one wonders whether it really is true that Americans only want to watch films about themselves.  Little Birds ought to be required viewing for anyone still clinging to the notion of war as a selfless act of heroic benevolence.  For those of us fortunate enough to have seen it, this is a film that long haunts the memory.

Gregory Elich is the author of Strange Liberators: Militarism, Mayhem, and the Pursuit of Profit.