2 years of laziness before starting this blog.

i’ll begin then by thanking israel who burned in one night two years of efforts to avoid getting myself trapped in this adventure.  good job guys!  especially the airport party.  and the bridges.  no way to leave the country.  nothing else to do than this blog.

after all, we all need sometimes a valid reason to start to work, and a good old war soundscape is ok as a starting point.

it is 2:42 am
the city is calm.   too calm.
i am going to try to sleep, but my minidisc is connected to the microphone and ready on my balcony.
i am pretty sure we’re having a nice party tonight.

6.15 pm
we’re hearing close bombing every hour or two.
i spent the day on the road and at friends’ houses, and did a couple of drawings at my parents’.
i will not go to the usa anymore.  the project is cancelled.   it is a shame.   we had to play with about 25 american musicians for 15 days in various states, but i cannot imagine myself playing music in a safe place while the country is burning down.
another bomb.   pretty close.
so many souvenirs. 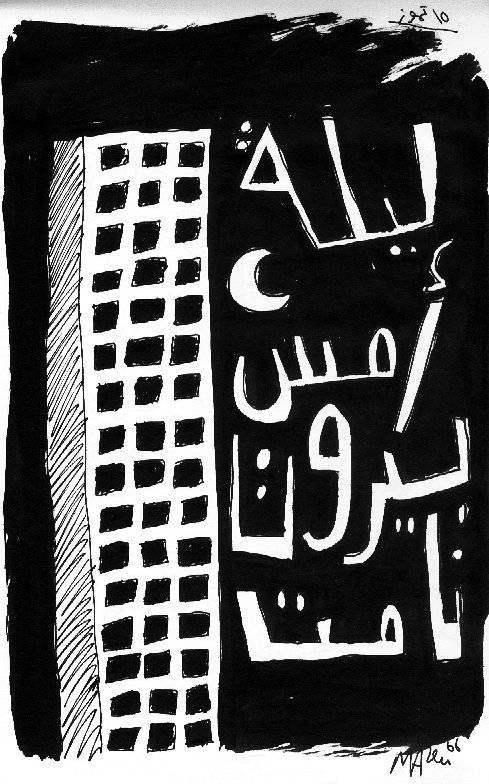 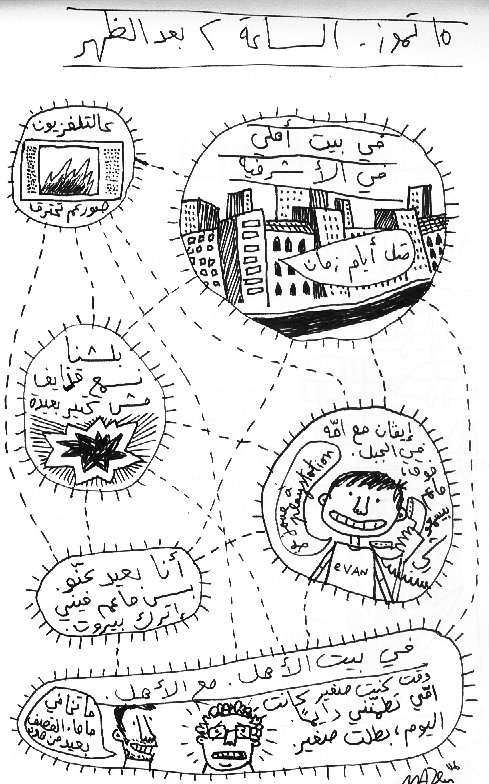 at my parents’ place in ashrafieh
“like the good old days”

on tv, tyr is burning

we begin to hear bombs not so far

evan is with his mum in the mountain.  they hear nothing there.
“i am playing playstation“

at my parents’.  with my parents.
when i was young, my mum was always reassuring.
today, i am not young anymore.
“don’t worry, mum, the bombs are far from here.” 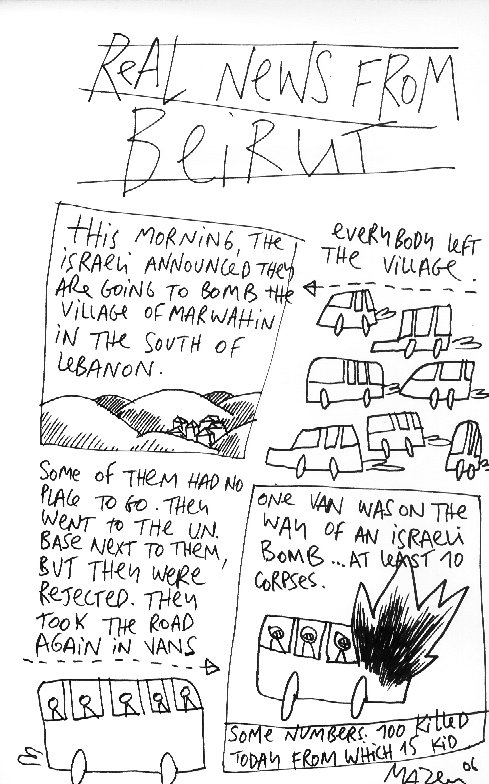 7:46 am
closer and closer each time.
4 huge bombs.  very close.  most probably inside beirut, not the subburbs.
the ports of beirut, tripoli, jounieh, and amchit are bombed.
it’s becoming serious.  real action.  from extreme south to extreme north the party is going on.  get your tickets ladies and gentlemen. 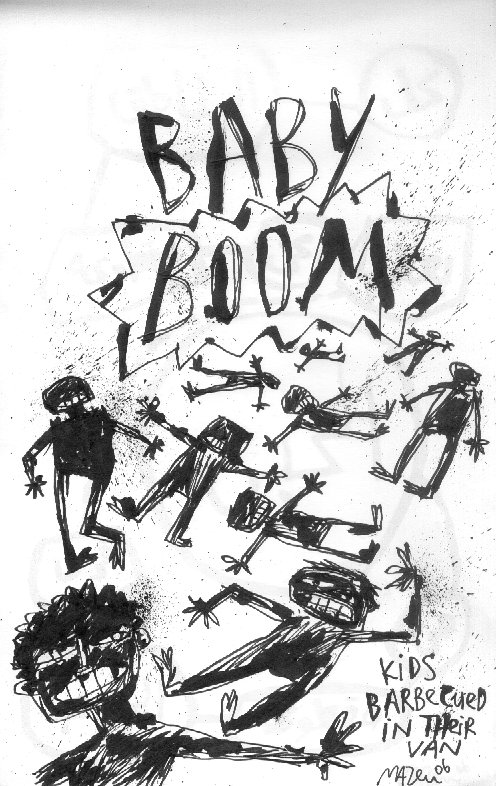 it seems that tonight the bombing won’t stop.
every 15 minutes, a new attack.  one or two bombs only each time.  just enough to keep you up the whole night. these guys are real artists.

a fucking huge bomb just arrived while i was writing.  how to describe this fucking feeling with words?

so yeah, the israeli pilots are real artists.  they know how to keep their audience attentive.  they never give you time to fall asleep; each time you feel the action is slow, they bring in some new emotional material to get you in again.  i suspect that they calculate exactly how long it takes for a normal human being to fall asleep, and act upon it.  well done, guys, it’s working. 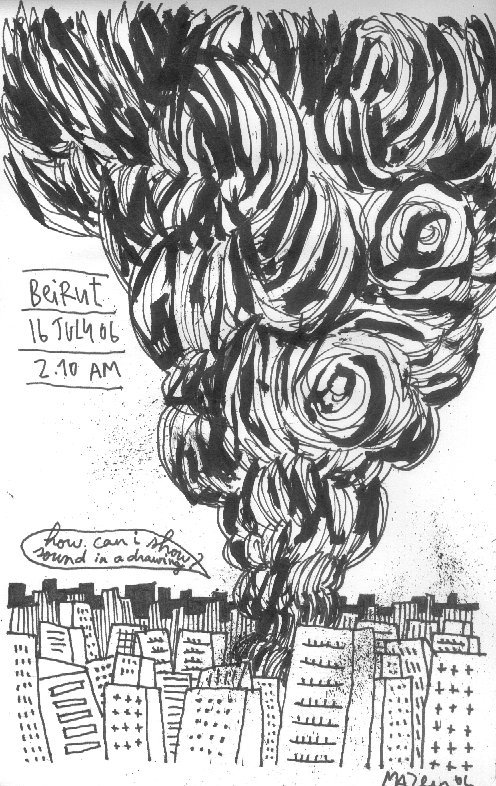 “how can i show sound in a drawing?” 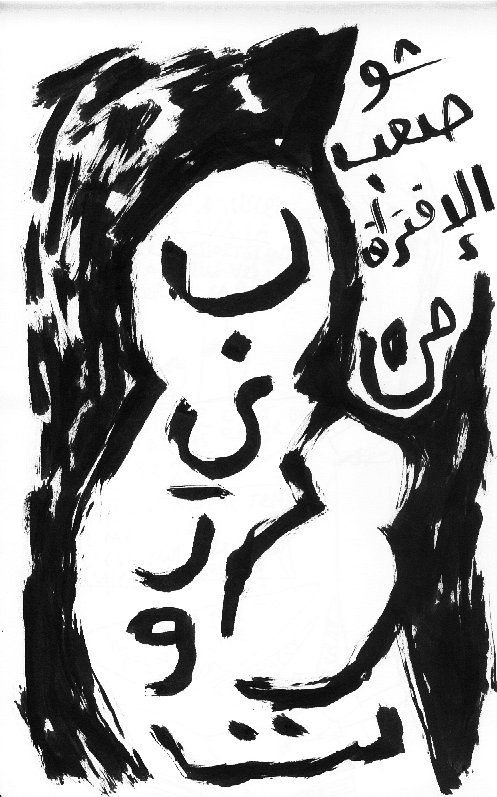 dear friends and family from lebanon and abroad,

i am receiving tons of supportive emails everyday.  thank you all.  we really need your eyes and ears.
i am trying as much as possible to answer everybody.
however, some questions are common to all, and i think it is relevant to answer the most asked one here.

the question: “how can we help?”

the answer is: speak.

speak about the shit happening here.  speak with your family.  with your friends.  with people you don’t know.  in a bar, a restaurant, at work.  with the people in the streets.  talk to everybody.  talk to buildings.
from here, it seems to us that no one in the whole world cares about those fucking burned corpses of children .

ps: our swiss friend, musician markus eichenberger, ordered a lebanese flag and is going to put it on his balcony.   he asked all his friends to do so.   i don’t know where the fuck they find lebanese flags in zurich but it seems like a cool thing to do.   after the mondial, all europe exchange their flags for the — ugly — lebanese one.

Tuesday, July 18, 2006
Still Alive and Well and Living in Beirut

one bad thing about this blog is that i receive tons of messages when i do not update it for a while.  people must think i died or something.  nothing like that can happen.

we’re still.
we’re still here.
we’re still alive.
we’re still waiting.
we still have nerves.
we will never lose them.
we’ll remain — the bombs will vanish.
we’ll survive this shit like we survived others.

there are not much updates since yesterday because i went to see some friends and family.  everybody is ok.

i didn’t draw that much.

2 drawings that i made yesterday were not cool at all.  i mean they were ugly.

having this kind of consideration for such trivial shit while people are being killed drives me crazy.  i tried to talk about this with a friend from germany in an email 2 days ago:

“anyways, music and drawing are the only things keeping me going these days. &nbsp
i recorded two hours of bombs + trumpet from my balcony last night. &nbsp
some bombs were really close (what kind of mouthpiece do the israeli pilots use to have this sound?).  the tension you get in your playing is incredible.  also, i draw all the time.

i always said that i regretted not having been adult during the war to see if I could do something in these situations.  now i feel bad to draw or play music while
people are burning.  i convince myself by saying it is my only way to resist.  that i have to witness.  that it is very important.

but i am not really convinced.  i try to be a fucking witness.   to show a
little bit of what’s happening here.   in my own way.   but having regard for what
is a good drawing or a good music track drives me crazy.  i cannot stop
saying after a bomb: ‘yeah, this one was huge.  i’ll leave a long silence and
then make a small sound to balance the track.’   this is totally crazy!”

i received an email from a lady asking me to remove her from my mailing list because she does not like and is “not used to hearing violent language.”
she also said: “i hope that your comprehension is as rapid as the speed at which you use to vociferate your insults.”
i removed her, but I asked before doing so if she had a better way of dealing with the situation than vociferating insults.  she answered (in bold): diplomatie.

i am sure this lady has a higher education degree at least.   maybe a doctorate or something.

what else to say.   i had a lot of thing i wanted to talk about before leaving to see evan in the mountains.  i do not remember.   so many things.   massacres maybe?

anyways, please keep me posted.  i’ll try to post some drawings tonight.   please keep posting.  it is very important.   post other people.   find other lebanes blogs.   a lot are old and great, and a lot, like mine, are flourishing everywhere (israel: thanks again for creating this “scene”).   i do not have time to check other blogs and post their links.   please find them.

a lot of people are asking me if they can post this or that drawing on their blog, or to publish it, etc.

to all the blog readers and beyond,

PLEASE NOTE THAT THERE IS NO COPYRIGHT ON ANY OF THE DRAWINGS OF THIS BLOG.   PLEASE DO PUBLISH, PHOTOCOPY, PRINT, DISTRIBUTE EVERYWHERE ALL THE DRAWINGS IF YOU CAN.

when the war is over, my lawyer will call you.   until then please spread them anywhere you can. 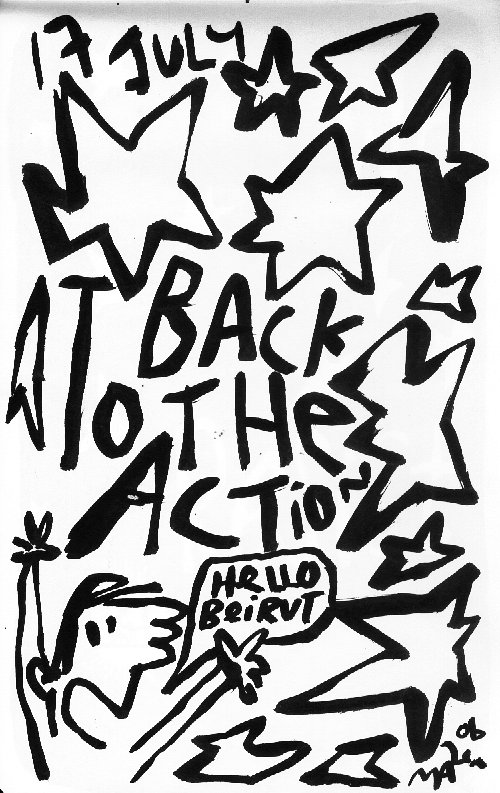 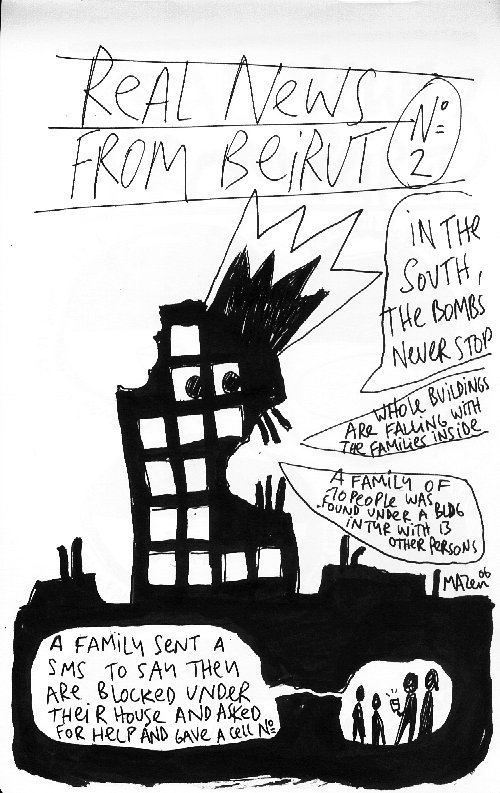 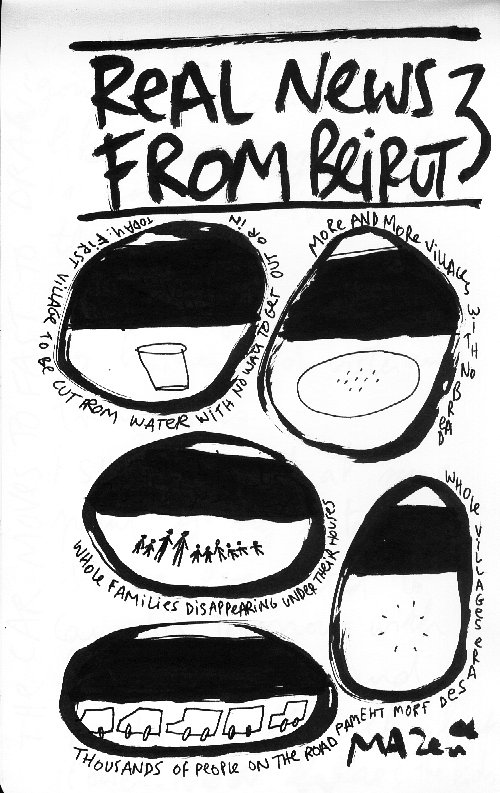 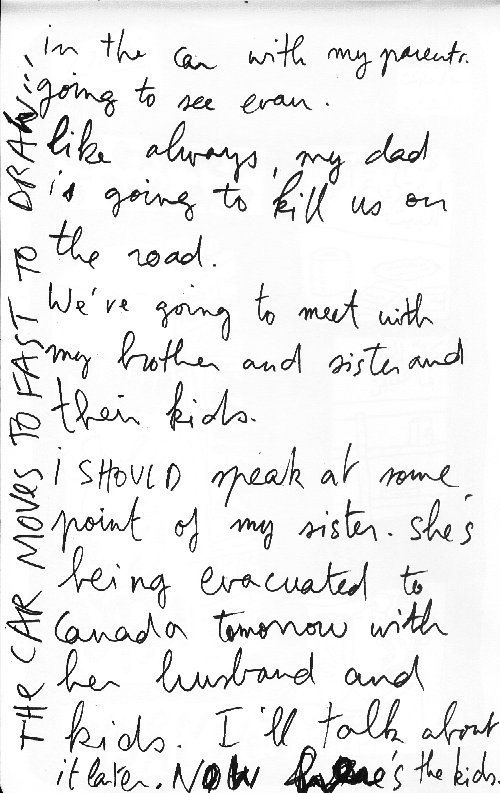 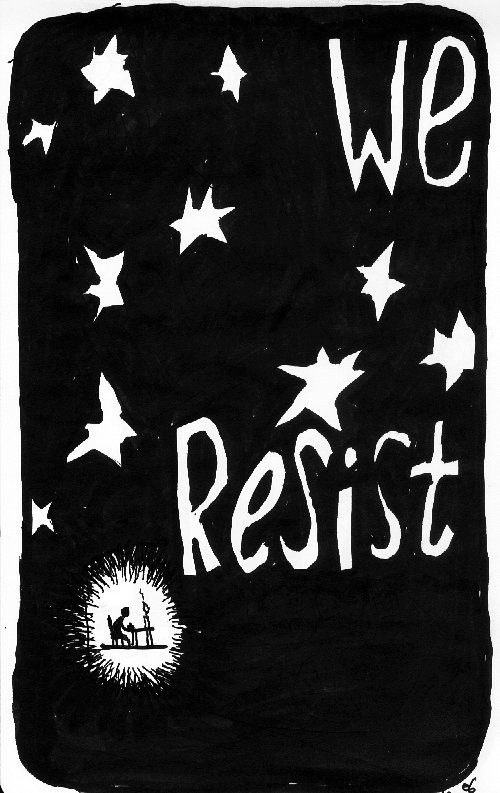 Mazen Kerbaj was born in Beirut in 1975 and has lived there since.  His main passions are comics, painting, and music.  In March 2000, he published some of his more personal works in his Journal 1999  (a dairy in comics).  He has published eight other books and many short stories.  Also in 2000, he performed in his first concert, at the Strike’s pub in Beirut.  This concert, a duo with Lebanese sax player Christine Sehnaoui, was probably the first improv music concert in the Middle East.

Between 2000 and 2005, Kerbaj played solo and in various groups at a lot of venues in Lebanon, Damascus, Paris, Bordeaux, Vienna, Berlin, New York, Chicago, Boston, and Philadelphia.  In 2001, with guitarist Sharif Sehnaoui, he founded the MILL association, which has sponsored IRTIJAL, an annual international festival for free music in Beirut, as well as many other events.

In August 2002, he, with Sehnaoui and double bass player Raed Yassine, recorded the album A, released by La CD-Thèque, Beirut.  Since February 2003, he has collaborated with Franz Hautzinger, Helge Hinteregger, and Taku Unami, as well as Sehnaoui.  Kerbaj, Hautzinger, Hinteregger, and Sehnaoui formed a quartet, Oriental Space.  A recording by Oriental Space is available on the Austrian label aRtonal, and Abu Tarek, a recording by the Kerbaj/Hautzinger duo, is available on the Portuguese label Creative Sources.  In 2005, Kerbaj released two new albums on the new Lebanese label Al Maslakh (The Slaughterhouse), one in solo and the other with Rouba3i quartet.