In recent months, Chicago has played host to two the nation’s largest immigrant rights marches.  In each event, hundreds of thousands of immigrants and their supporters took to the streets to demand justice.  Elected officials flocked to the podium at these events, celebrating the diversity of the community and declaring the need to provide and protect the rights of immigrants.  At the March rally, Mayor Daley declared, “We work.  We pay taxes.  We are part of the American dream.  And you will be included in the American dream because you are part of America.”

Many employers have joined the chorus.  In its statement on immigration reform, the Chicagoland Chamber of Commerce echoed most of the business sector stating, “We recognize that immigrants have played an important role throughout our nation’s history.  Our economy will depend on immigrants even more heavily in the near future.”

However, many Chicago employers rely on a day labor employment system which routinely exploits immigrant workers.  More and more, Chicago employers impose contingency on their low wage workforce as a human resource strategy.  Undocumented immigrants play an important role in this system which reduces company obligations to workers and depresses wages.

Accompanying this drive to keep wages low, employers continue to push for greater “flexibility” in their workforce.  Echoing the principles of “just in time inventory management,” companies increasingly push toward a “just in time” workforce as well.  In this model, workers function much like commodities, delivered to the work site when needed, and dispatched when not.  In this system, any social contract between the worker and employer is dissolved.

First, they facilitate the conversion of jobs previously classified as permanent to temporary status.  While considered temps, workers may hold these jobs for years without receiving benefits or pay increases.

In order for this strategy to work, the day laborers must be easily replaceable.  The ongoing influx of immigrant workers to Chicago ensures an abundant and eager army of unemployed workers to fuel the process.  Day labor agencies frequently locate in neighborhoods like Chicago’s Humboldt Park to gain easy access to these workers.

Just as important, day labor agencies also provide a buffer, distancing workers from the employer and reducing or wholly negating any responsibility that the employer may have to the worker.  This greatly simplifies hiring and firing employees since adding or eliminating workers is as simple as making a telephone call.

This system marginalizes and atomizes the workforce, making workers more vulnerable to exploitation.  Legally they are contract employees with limited rights which are difficult to exercise.  As a result, day laborers commonly suffer shorted paychecks, illegal transportation costs, hiring discrimination, sexual harassment as well being subject to unsafe working conditions.

For the worker, attempting to rectify any of these violations can feel like an endless shell game in search of the responsible party.  When a worker is able to muster the courage to complain to an employer, they’re often directed to the day labor agency.  If they risk speaking out to the agency, they’re often terminated or directed back to the employer.  As a result, many problems are never resolved.

Nik Theodore, Director of the University of Illinois at Chicago’s Center for Urban Economic Development adds, “The worksite employer will point to the temp agency.  The temp agency will point back to the worksite employer and the worker has little recourse to figure out where responsibility lies.  This kind of employment relationship, which we often describe as triangular, really obscures accountability.”

San Lucas Workers Center (SLWC),  a bi-lingual, multi-racial committee of immigrant and U.S.-born day labor workers, has pursued abusive agencies for years.  Through its work, abusive agencies have been subject to fines and other penalties from both the state and federal departments of labor.  In one case, a violating agency was successfully shut down.

Day labor worker and SLWC leader, Mark Saulys, “For the most part it proved to be kind of a waste of time to go after the agencies.  Given the nature of the temp industry you have to go after the client employers.  You have to follow the money to the top.”

To do this, San Lucas initiated a campaign to hold employers accountable for the treatment their workers by delinquent day labor agencies those employers contract with.

Saulys adds, “A fundamental rule of organizing is that you have to bring your demands and issues to the one who has the power to make the decisions.  In this case it’s the work site employer.”

As part of the accountability campaign, San Lucas first identifies day labor agencies willing to sign and comply with San Lucas’ Code of Conduct.  The code requires agencies follow all labor laws, treat workers with respect, and agree to provide a clear path to permanent work.

Employers known to contract with abusive agencies are then identified.  As part of the process, San Lucas meets with the employer to raise awareness of the problem and demand that it replace the abusive agency with a code-compliant firm.

Ron’s has long been a scourge of many day laborers.  Over the years, the agency has been subject to repeated investigations by the Illinois Department of Labor and has been cited for over 6,000 violations.

Last December, Paper Source agreed to drop Ron’s and hire a code-complaint agency after San Lucas pressured owners through direct action tactics and a fax and email campaign.  While initially optimistic, since then, San Lucas contends that Paper Source has failed to live up to its agreement.

While it did hire code-compliant, Viking Labor Services, it also refused to end its contract with Ron’s.  Paper Source, co-owner, Jim York denies agreeing to terminate the contract with Ron’s and claims that retaining Ron’s while adding Viking provides a choice for its day labor work force.

In a recent community meeting, York stated, “We have offered a choice of temp agencies to our workers since December of last year and we think that having an opportunity to make a choice is really important.”

When challenged on his claim of worker choice, free of employer interference or coercion, York responded, “It’s also not a choice to tell people they have to switch over tomorrow and if they can’t they’re out of a job.”

Neither York or Paper Source manager Brian Heery was able to say why switching agencies would be difficult or result in unemployment.  Since Paper Source day laborers are permatemps, the workers rarely need to visit the day labor agency.  A change of agencies could be accomplished through administrative means, simply transferring workers from Ron’s to the Viking work ticket.

And while York acknowledges being the boss, at the same time York claims, “I am not a supporter of Ron’s.  I am a supporter of the workers that come to our facility every day.”

A number of Paper Source workers disagree, claiming that the process of changing to the new agency has been tainted with worker intimidation and delayed by unnecessary administrative hassles.  For instance, for months Viking’s representatives were prohibited from speaking with workers at the workplace.  Instead, workers had to travel to the new agency in order to transfer, creating a significant burden since many lack transportation.

Last spring, three long-time day labor workers were fired after a company meeting was held to discuss the new changes.  Company representatives claim the terminations resulted from inappropriate behavior while the workers maintain they were fired for asking questions and speaking out.

To protest the firings, San Lucas organized a demonstration at Paper Source’s downtown retail outlet in April.  Fired worker, Guadalupe Areta stated that the terminations sent a clear message to the other workers and said, “I was fired because I stood up for my rights.  All of the production work that is done in this store is done by Latina hands and we ask for respect and for dignity because we are human beings.” 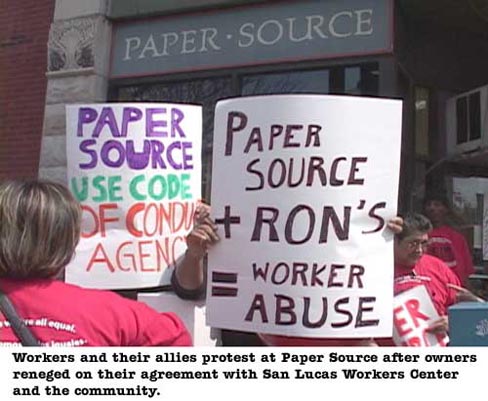 Paper Source day laborer, Graciela Flores asked that York end its contract with Ron’s and told him that workers who had changed to the new agency had been blacklisted.  Should they ever lose their job at Paper Source, they will be ineligible to return to Ron’s.

For his part, York stubbornly stuck to his position.  When questioned on Ron’s checkered labor record, he dismissed the charge, stating the violations were irrelevant since the most recent are several years old.

Although York continues to resist ending the Ron’s contract, the workers have results to show for their efforts.  Despite the difficulties, 32 of Paper Source’s 45 day laborers have switched to Viking.  Further, when the Viking contract was added, it immediately provided its workers a pay increase with paid holidays.  Since then, Ron’s had to offer the similar benefits to its workers.  Additionally, no new workers have been added to Ron’s contract since the initial agreement with San Lucas was reached.  Currently, Viking carries 37 workers on its ticket.  A few have even transitioned from temporary to permanent status.

But for San Lucas leader, Mark Saulys, a complete victory is necessary.  “Employers need to understand that contracting with Ron’s is unacceptable.  We can’t look back on this and congratulate ourselves for a noble effort.  Employers must be held accountable for working with renegade day labor agencies.”

Greg Boozell is a documentary filmmaker and former board member of the San Lucas Workers Center.  This essay was originally published in a slightly different form in the December 2005 issue of The Progressive.