In the modern world, where the state exercises the ultimate power over life and death, what would cause a common man or woman to join an insurgency against the powers that be?

Not become a terrorist.  Terrorism is defined as the systematic use of terror as a means of coercion.  History shows that all too often it is the state with a reactionary agenda and elaborate apparatus of coercion that is the real terrorist.  The insurgent is the hero — the man, woman, or child who, facing arrest, incarceration, torture, and death, stands up against a repressive regime.

Set amid the beauty and turmoil of apartheid South Africa in the 1980s, Catch a Fire goes straight to the heart of the issue of terror and the state.  Directed by Phillip Noyce (The Quiet American and Rabbit-Proof Fence), this political drama focuses on the lives and actions of two men, Patrick Chamusso, a real-life reluctant insurgent played by Derek Luke, and Colonel Nick Voss of the Police Security Branch, defender, by any means necessary, of the apartheid system portrayed by actor-activist Tim Robbins. 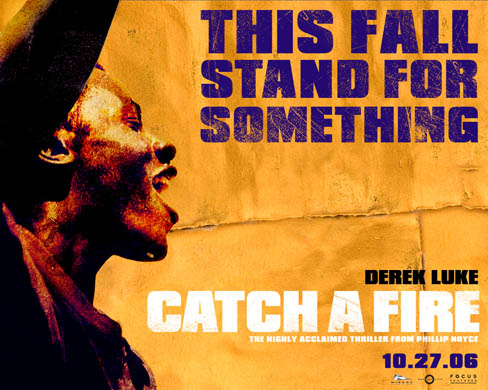 Though centered on the conflict between these two men, Catch a Fire dissects the politics of apartheid by contrasting the family and community lives of the main characters within the broader themes of repression and resistance.  The scenes in which the two worlds collide, individually and collectively, are electric.

In the end, Catch a Fire pays fitting tribute to the men and women who toppled one of the worst regimes in history.  The film is both satisfying and unsettling.  Playing, as it is, against the background of the current US War on Terror, questions, never asked in the film, intrude — How many lives have been spent or ruined in the current campaign to dominate the Middle East?  How many reluctant insurgents did the US-led coalition create today?  Will the outcome of the current conflict produce anything positive?

Catch a Fire is hard to watch but not to be missed by anyone trying to understand the consequences of state terrorism and insurgency — both yesterday and today.