The “Scout Law” of the Boy Scouts of America reads “a scout is true to his family, Scout leaders, friends, school, and nation.” 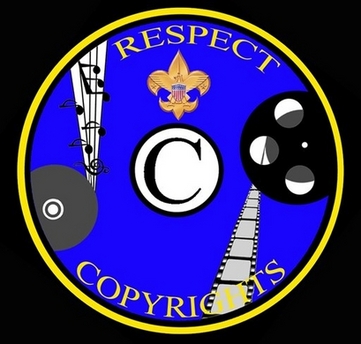 An October 20th press release from the Motion Picture Association of America announced that it has teamed up with over 52,000 Boy Scouts in the Los Angeles area to unveil the latest merit badge: the Respect Copyrights Activity Patch.  The badge’s artwork includes the images of a film reel, a record, and the familiar circle-C copyright logo.

“Working with the Boy Scouts, we have the opportunity to educate a new generation about how movies are made, why they are valuable, and hopefully change attitudes about intellectual property theft,” said Dan Glickman, the Chairman and CEO of the MPAA.  The program is meant to inform Scouts about the danger of internet “piracy” and teach them and their friends how to discourage it (i.e. how to identify counterfeit CDs and DVDs).  According to the Los Angeles Times, the inspiration came from a Boy Scout troop in Hong Kong which had its members pledge to not only abstain from using pirated files, but also turn in groups and individuals who did.  While the LA Scouts have yet to go this far, one wonders when they will.

That the Boy Scouts, whose original by-laws required loyalty to one’s own employer, have eagerly signed up for this project is unsurprising.  But the story has sent a shock wave through the blogosphere.  Within hours of the press release, Web sites all over the country started registering their discontent.  “Gosh,” one post sarcastically said, “if only we had the money to buy off the Boy Scouts and get their organization to create badges that serve our interests too.”

It seems clear that most people take a dim view of the MPAA-Boy Scouts joint venture.  And there is little wonder why.  Ever since it became possible to download music and film over the internet, the MPAA, along with its counterpart in the recording industry, the Recording Industry Association of America, has engaged in nothing short of a crusade to halt the spread of “unauthorized” material.  This past summer, the MPAA’s international arm raided and arrested 915 people in Asia and the South Pacific for possession of pirated DVDs.  Over the past several years, over 2,500 people worldwide have been arrested on the same charge.

The RIAA, for its part, has been just as ruthless in prosecuting music fans in this country.  Since taking Napster to court seven years ago, it has gone after file-sharers with the shamelessness of Mark Foley after one too many Barry White songs.  The long list of defendants includes single parents, twelve-year-old girls, and recently deceased grandmothers.  The RIAA offers surviving families a sixty-day grieving period before deposition.  The RIAA shows little remorse for those whom it bankrupts.  Cassi Hunt, a student at MIT and accused file-sharer, was even told by an RIAA representative that “the RIAA has been known to suggest that students drop out of college or go to community college in order to be able to afford settlements.”

Of course, both industries claim that they are merely trying to protect the integrity of the artists, as well as jobs of such workers as cameramen and soundboard-ops.  The MPAA’s press release, for example, cites “5.5 billion dollars in lost earnings among US workers” and “141,030 lost jobs.”  Yet even the most cursory glance at the stocks and earnings of MPAA member studios will show that they are far from bankruptcy.  In the tangled web of the entertainment industry, where record companies and film studios are owned by the behemoth media conglomerates, the profits lost as a result of file-sharing are negligible if existent at all.

Take Viacom.  Viacom’s subsidiary, Paramount Pictures, was the least profitable of the Hollywood “big six” that make up the MPAA.  Poor guys only raked in $17 billion last year.  But despite a 17 percent decrease in profits in 2004, the company still managed to pay its Chairman, Sumner Redstone, a base salary of $4.97 million and a bonus of over $16 million.  Of course, after Viacom split off into two different companies, Redstone had to take a pay-cut.  But when all is said and done, by the end of next fiscal year, Redstone will still have made enough in the past three years to buy almost four million people a free movie ticket.  That’s more than the population of Boston, Washington DC, San Francisco, and Dallas combined.  It hardly looks as if those pesky teenagers downloading School of Rock in their basement are sending Redstone and company to the poorhouse any time soon.

Likewise, record companies not only are not suffering in the age of file-sharing but appear to be thriving.  The largest four record companies (EMI, Sony BMG, Universal Music, and Warner) account for over 90 percent of the world’s music sales and seem to operate more like a cartel than anything else.  In 2003, the big four settled a case brought by 43 state Attorney Generals accusing them of price fixing.

Moreover, the claim of saving jobs rings hollow in the case of Sony and BMG, which after its merger last year laid off around 2,000 workers.  Are these “unfortunate” cutbacks the result of a massive dip in profits?  Hardly.  Several critics have pointed to the upswing in album sales during the height of Napster days and their subsequent fall after Napster and others were cracked down on.  A 17-week study by Harvard Business School in 2002 could find no negative relationship between downloading and album sales and even discovered that file-sharing actually increased the sales of the most popular albums.

So why have both industries engaged in such severe crackdowns?  What has caused them to go to these extreme lengths, the MPAA almost literally recruiting Boy Scouts to snitch on their friends?  Perhaps it’s not just about sheer profits.

What truly scares both industries, I submit, is that, now, there are means that allow bands and filmmakers to share their creations independent of corporate control.  The advent of MP3s and internet movies meant that suddenly artists could directly deliver their work to their fans without having to wait for a corporate go-ahead.  Artists from Prince to Wilco have released their albums online before hitting the stores, and independent filmmakers are seeing the internet as a legitimate way to gain notice.  Nicole Colson summed it up well in a 2004 article: “The music industry isn’t against downloading per se.  It’s against the idea that fans and artists should be able to step outside the industry’s control.”

The bottom line is that everyone deserves art, film, and music in their lives.  But if we really want it to be ours, then we need to understand that the “industries” are obsolete.  In the end, people like Richard Branson and Michael Eisner are little more than parasites looking to make a buck off what we create and enjoy.  And like all parasites, they need us a lot more than we need them.

Alexander Billet writes about music, theatre and film, and currently lives in Washington DC.  He is working on a book titled The Kids Are Shouting Loud: The Music and Politics of the Clash.  He can be reached at alexbillet@hotmail.com.