Even by the grim standards of Gaza, the past five months have been cruel ones.

Some four hundred Palestinians, mostly unarmed civilians, have been killed during Israeli attacks.  (Four Israeli soldiers and two civilians have been killed.)  Israel has sealed off Gaza from the outside world while the international community has imposed brutal sanctions, ravaging Gaza’s already impoverished economy.

“Gaza is dying,” Patrick Cockburn reported in The Independent, “its people are on the edge of starvation. . . . A whole society is being destroyed. . . . The sound that Palestinians most dread is an unknown voice on their cell phone saying they have half an hour to leave their home before it is hit by bombs or missiles.  There is no appeal.”

“Gaza is in its worst condition ever,” Gideon Levy wrote in Haaretz.  “The Israel Defense Forces has been rampaging through Gaza — there’s no other word to describe it — killing and demolishing, bombing and shelling, indiscriminately. . . . This is disgraceful and shocking collective punishment.”

Predictably Gaza teetered on the precipice of civil war.  “The experiment was a success: The Palestinians are killing each other,” Amira Hass wryly observed in Haaretz, “They are behaving as expected at the end of the extended experiment called ‘what happens when you imprison 1.3 million human beings in an enclosed space like battery hens.'”

It is at times like this that we expect human rights organizations to speak out.

How has Human Rights Watch responded to the challenge?

It criticized Israel for destroying Gaza’s only electrical plant, and also called on Israel to “investigate” why its forces were targeting Palestinian medical personnel in Gaza and to “investigate” the Beit Hanoun massacre.

Were this record not shameful enough, HRW crossed a new threshold at the end of November.

After Palestinians spontaneously responded to that “unknown voice on a cell phone” by putting their own bare bodies in harm’s way, HRW rushed to issue a press release warning that Palestinians might be committing a “war crime” and might be guilty of “human shielding” (“Civilians Must Not Be Used to Shield Homes Against Military Attacks”).

In what must surely be the most shocking statement ever issued by a human rights organization, HRW indicted Palestinian leaders for supporting this nonviolent civil disobedience:

Prime Minister Haniyeh and other Palestinian leaders should be renouncing, not embracing, the tactic of encouraging civilians to place themselves at risk.

The international community has for decades implored Palestinian leaders to forsake armed struggle in favor of nonviolent civil disobedience.  Why is a human rights organization now attacking them for adopting this tactic?

Is it a war crime to protect one’s home from collective punishment?

Is it human shielding if a desperate and forsaken populace chooses to put itself at deadly risk in order to preserve the last shred of its existence?

Indeed, although Israeli soldiers have frequently used Palestinians as human shields in life-threatening situations, and although HRW has itself documented this egregious Israeli practice, HRW has never once called it a war crime.

It took weeks before HRW finally issued a report condemning Israeli war crimes in Lebanon.  Although many reliable journalists were daily documenting these crimes, HRW said it first had to conduct an independent investigation of its own.

But HRW hastened to deplore the nonviolent protests in Gaza based on anonymous press reports which apparently got crucial facts wrong.

Why this headlong rush to judgment?

Was HRW seeking to appease pro-Israel critics after taking the heat for its report documenting Israeli war crimes in Lebanon?

After Martin Luther King delivered his famous speech in 1967 denouncing the war in Vietnam, mainstream Black leaders rebuked him for jeopardizing the financial support of liberal whites.  “You might get yourself a foundation grant,” King retorted, “but you won’t get yourself into the Kingdom of Truth.”

HRW now also stands poised at a crossroads: foundation grants or the Kingdom of Truth?

A first step in the right direction would be for it to issue a retraction of its press release and an apology.

HRW executive director Kenneth Roth “commended” Israel during its last invasion for warning people in south Lebanon to flee — before turning it into a moonscape, slaughtering the old, infirm and poor left behind.  It would seem that Palestinian leaders and people, too, merit some recognition for embracing the tactics of Gandhi and King in a last desperate bid to save themselves from annihilation.

Norman G. Finkelstein received his doctorate in 1988 from the Department of Politics, Princeton University, for a thesis on the theory of Zionism.  He currently teaches political theory at DePaul University in Chicago.  Finkelstein is the author of five books: Beyond Chutzpah: On the Misuse of Anti-Semitism and the Abuse of History (University of California Press, August 2005); The Holocaust Industry: Reflections on the Exploitation of Jewish Suffering (Verso, 2000; expanded second edition, 2003); Image and Reality of the Israel-Palestine Conflict (Verso, 1995; expanded second edition, 2003); (with Ruth Bettina Birn) A Nation on Trial: The Goldhagen Thesis and Historical Truth (Henry Holt, 1998); and The Rise and Fall of Palestine: A Personal Account of the Intifada Years (University of Minnesota: 1996).  This article was first published at his Web site on 29 November 2006. 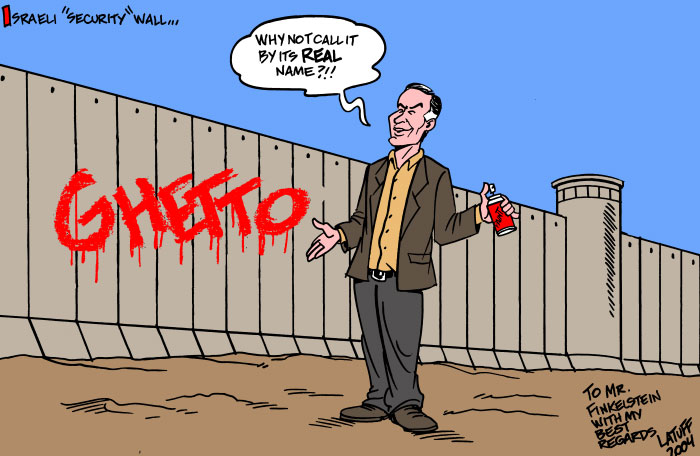