In June 2004, the General Assembly, Presbyterian Church (U.S.A.), resolved to consider a phased, selective divestment from companies profiting from Israel’s occupation.  Subsequently it came under intense pressure from Jewish organizations (and their allies) and will consider rescinding the resolution at the next General Assembly meeting on June 15-22 in Birmingham, Alabama.  To firm up support for the original initiative, I wrote this letter.  Generous financial contributors and activists then sent along with my letter a copy of my book Beyond Chutzpah to each of the 700 voting delegates and alternates.  Below are pictures from the book party where packages were stuffed and sent off as well as articles on the debate inside the church.

Permit me to introduce myself. My name is Norman G. Finkelstein.  I teach political science at DePaul University in Chicago and am the author of many publications on the Israel-Palestine conflict.  I am Jewish.  Both my late parents were survivors of the Nazi concentration camps.  Every member of their respective families was exterminated during the war.  The most important lesson they taught me and my siblings was not to be silent in the face of other people’s suffering.

In the spirit of this legacy I have devoted most of my adult life to achieving a just and lasting peace in Israel and Palestine.  Like many others I was moved and elated by the resolution taken at the 216th General Assembly (2004), Presbyterian Church (U.S.A.), to consider a phased, selective divestment from companies profiting from Israel’s occupation.  Recently I have been informed that, in various Presbyteries of the PCUSA, pressure has arisen to rescind that bold initiative at the forthcoming 217th General Assembly (2006) of the PCUSA — pressure coming from organizations both within and outside the church, some claiming to speak for the Jewish community.

I believe that rescinding or weakening this resolution would be a terrible mistake.  A moral enquiry would pose two questions: Do Israeli human rights violations warrant your church’s initiative, and is such an initiative the best tactic to achieve the desired goal of ending these violations?  In my view, the answer to both these questions is an emphatic yes.

Israel’s real human rights record in the Occupied Palestinian Territory is barely known.  This is primarily due to the formidable public relations industry of Israel and its uncritical defenders abroad as well as their tactics of intimidation, such as labeling dissenters from Israeli policy anti-Semitic.

Israeli human rights violations, many rising to the level of war crimes and crimes against humanity in the opinion of human rights organizations, include:

Apart from the sheer magnitude of its human rights violations, the uniqueness of Israeli policies merits notice.  “Israel has created in the Occupied Territories a regime of separation based on discrimination, applying two separate systems of law in the same area and basing the rights of individuals on their nationality,” B’Tselem has concluded.  “This regime is the only one of its kind in the world, and is reminiscent of distasteful regimes from the past, such as the apartheid regime in South Africa.”  If singling out South Africa for economic sanctions was defensible, it would seem equally defensible to single out Israel’s occupation, which uniquely resembles the apartheid regime.

Although the PCUSA’s initiative can clearly be justified on moral grounds, the question remains whether quiet diplomacy might be a more constructive alternative.  The basic terms for resolving the conflict are embodied in U.N. resolution 242 and subsequent U.N. resolutions.  They call for a full Israeli withdrawal from the West Bank and Gaza and the establishment of a Palestinian state in these areas in exchange for recognition of Israel’s right to live peacefully with its neighbors.  While each year the overwhelming majority in the United Nations vote in favor of this two-state settlement, Israel and the United States (and a few South Pacific islands) have consistently opposed it.

Not only has Israel stubbornly rejected this two-state settlement, but the policies it is currently pursuing will abort any possibility of a viable Palestinian state.  It has been constructing a wall deep inside the West Bank that will annex the most productive land and water resources as well as East Jerusalem, the center of Palestinian life.  It will also effectively sever the West Bank in two.  Although Israel initially claimed that it was building the wall to fight terrorism, the newly elected Israeli government has explicitly acknowledged that the wall will serve as Israel’s future border.  In addition Israel has signaled its intention to retain the Jordan Valley within the eastern border of the West Bank as well as a settlement bloc in the north which will sever this territory yet again.  Palestinians will be confined to half the West Bank in a multitude of tiny and isolated communities.

The current policies of the Israeli government will lead either to endless bloodshed or the dismemberment of Palestine.  “It remains virtually impossible to conceive of a Palestinian state without its capital in Jerusalem,” the respected International Crisis Group recently concluded, and accordingly Israeli policies in the West Bank “are at war with any viable two-state solution and will not bolster Israel’s security; in fact, they will undermine it, weakening Palestinian pragmatists . . . and sowing the seeds of growing radicalization.”

In the face of diplomatic paralysis the moral burden to avert the impending catastrophe must be borne by individual men and women of conscience.  A nonviolent tactic the purpose of which is to achieve a just and lasting settlement of the Israel-Palestine conflict cannot legitimately be called anti-Semitic.  Indeed, the real enemies of Jews are those who debase the memory of Jewish suffering by equating your church’s conscientious initiative with anti-Semitism.

I am enclosing with this letter a copy of my recent book Beyond Chutzpah which documents both the misuse of anti-Semitism by Israel’s uncritical supporters as well as Israel’s sad human rights record in the Occupied Palestinian Territories.  Should you find the time to read it, I am sure you will be convinced that the 216th General Assembly (2004) of the PCUSA made the right decision and that its reaffirmation by the upcoming 217th General Assembly (2006) will best encourage and promote, in the long run, a just and lasting peace for Jews, Christians and Muslims in Israel and Palestine. 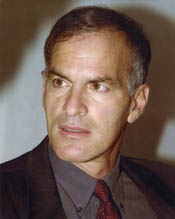 Norman G. Finkelstein received his doctorate in 1988 from the Department of Politics, Princeton University, for a thesis on the theory of Zionism.  He currently teaches political theory at DePaul University in Chicago.  Finkelstein is the author of five books: Beyond Chutzpah: On the Misuse of Anti-Semitism and the Abuse of History (University of California Press, August 2005); The Holocaust Industry: Reflections on the Exploitation of Jewish Suffering (Verso, 2000; expanded second edition, 2003); Image and Reality of the Israel-Palestine Conflict (Verso, 1995; expanded second edition, 2003); (with Ruth Bettina Birn) A Nation on Trial: The Goldhagen Thesis and Historical Truth (Henry Holt, 1998); and The Rise and Fall of Palestine: A Personal Account of the Intifada Years (University of Minnesota: 1996).  This article was originally published at his Web site.