As Christian leaders from the United States, we traveled to the Islamic Republic of Iran at this time of increased tension believing that it is possible to build bridges of understanding between our two countries.  We believe military action is not the answer, and that God calls us to just and peaceful relationships within the global community.

We are a diverse group of Christian leaders from United Methodist, Episcopal, Catholic, Baptist, Evangelical, Quaker, and Mennonite traditions.  The Mennonites have 17 years of on the ground experience in Iran.   We were warmly welcomed by the Iranian people, and our time in Iran convinced us that religious leaders from both countries can help pave the way for mutual respect and peaceful relations between our nations. 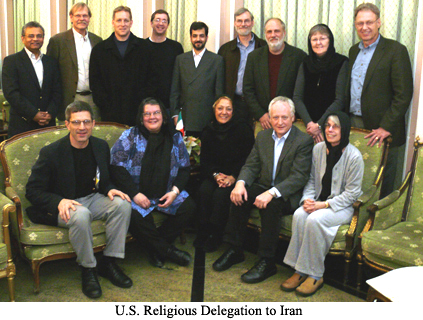 During our visit we met with Muslim and Christian leaders, government officials, and other Iranian people.

Our final day included a meeting with former President Khatami and current President Ahmadinejad.  The meeting with President Ahmadinejad was the first time an American delegation had met in Iran with an Iranian president since the Islamic revolution in 1979.  The meeting lasted two-and-a-half hours and covered a range of topics, including the role of religion in transforming conflict, Iraq, nuclear proliferation, and the Israeli-Palestinian conflict.

What the delegation found most encouraging from the meeting with President Ahmadinejad was a clear declaration from him that Iran has no intention to acquire or use nuclear weapons, as well as a statement that the Israeli-Palestinian conflict can only be solved through political, not military means.  He said, “I have no reservation about conducting talks with American officials if we see some goodwill.” 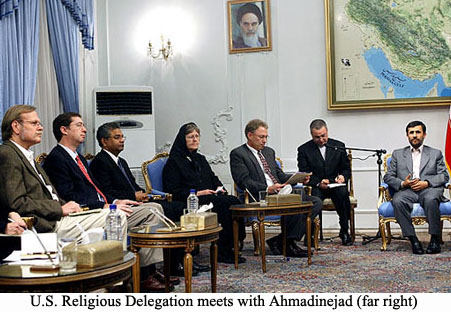 We believe it is possible for further dialogue and that there can be a new day in U.S.-Iranian relations.  The Iranian government has already built a bridge toward the American people by inviting our delegation to come to Iran.  We ask the U.S. government to welcome a similar delegation of Iranian religious leaders to the United States.

As additional steps in building bridges between our nations, we call upon both the U.S. and Iranian governments to:

As people of faith, we are committed to working toward these and other confidence building measures, which we hope will move our two nations from the precipice of war to a more just and peaceful relationship.

Members of the delegation:

James Winkler, General Secretary of the General Board of Church & Society (GBCS), The United Methodist Church

This statement by the National Council of Churches’ delegation to Iran was published by NCC News Service on 26 February 2007.