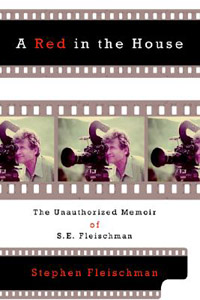 This review is late in coming because it has taken a couple of years for me to understand who this Fleischman fellow is, with the tough, brilliant commentaries on various issues in CounterPunch and elsewhere.  A Red in the House gives us what we need to know:  he’s 88 years old and tough as ever.  He is also a veteran of the very top levels of television news during the 1950s and 1960s.  In short, he’s a sui generis radical.

Back in the day, Fleischman was a vigorous member of the Popular Front — not so much the hard-line, frontline CPUSAers, but the mass of ordinary folk who supported the great causes of unionism, antifascism, and antiracism, also the Soviet Union (until disillusionment), and always the hope for the triumph of socialism over capitalism.  As a college kid at Haverford, he had organized the student strike of 1938, then joined the Young Communist League, and went to study classes in the West Village during the War.  Covering the World Federation of Democratic Youth meetings in Prague as stringer for several leftwing papers in 1948 was, however, doubtless his biggest crime (and exposure).  Like many others, he had already drifted or was drifting out of the Party when he went to work at CBS a few years later, a bright young fellow and aspiring journalist in the medium most accessible.

Fleischman wasn’t the only former CPer or Popular Fronter who managed not to get blacklisted from the networks during the1950s.  Screenwriters, as Walter Bernstein and Woody Allen demonstrated famously in The Front, often managed to slip into TV drama under assumed names.  Others who had never joined the Party used their own names, and with those who deployed “fronts,” wrote a lot of the most interesting television of the era, You Are There (1953-55) to The Adventures of Robin Hood (1955–60) to various episodes of Westerns, detective shows, and so on.  By the mid-1960s, they were even producing a hard-hitting liberal show or two, and by the early 1970s, some survivors went to work as part of the Norman Lear atelier, in shows by now frankly anti-war, left-liberal, feminist, and anti-racist, naturally within the limits of network censorship.

Leftwing newsmen were rarer, but when they could make headway, they were among the more openly liberal section of the big-time media.  Blacklisted screenwriter Abraham Polonsky told me that Walter Cronkite and the other narrators of You Are There knew perfectly well that Red writers were delivering the best scripts . . . and kept quiet about it.  Fleischman, who began with a news show called The Searchers, graduated to work with Cronkite on The Face of Crime, a one-hour special, and then on to years at CBS Reports.  He did a lot of fantastic fieldwork on Reports, and he gives us the lowdown on what he saw and was permitted to report, from Africa to the American South.

He was sometimes teamed, remarkably enough, with the 1940s Popular Fronter who had become a liberal Cold War hardliner: Eric Sevareid, covering the brief spread of Fidelismo to the Latin American continent.  He did great muckraking work on health issues, decades ahead of the rest of mainstream media on the effects of corporate farming, he won an award for a special on birth control and the law, he covered Malcolm X not long before the assassination, and he has to his credit one of the best and earliest realistic Vietnam news specials (The Agony of Vietnam was conveniently suppressed after a single showing . . . but somehow, videos of it appeared on college campuses).

Fleischman did so much else that no recounting here can possibly do this book justice.  Black music, labor, coal, the environment, he took on every good subject within his grasp and gave it at least a humanistic, sometimes a pretty leftwing, angle.  Every one of them is worth studying again, and so is this book, especially for the aspiring newsperson, print, air, or blog, for the twenty-first century.