The June 29 announcement of the approval of a wage-cutting agreement between Delphi Corporation, an auto parts manufacturing giant, and the United Auto Workers (UAW) means that U.S. labor has suffered yet another defeat in the ongoing war of attrition that is being waged against working people around the world.

Details of the pact have not been released but union officials have confirmed that it cuts wages for top union workers from around $27 per hour to between $14 and $18.50 — in other words, almost in half.  Reportedly, 68 percent of the workers voted for the new four-year contract — 32 percent against.  Capital wins another round.

To call the Delphi concession, carried out under the threat of offshoring all Delphi work to Mexico, a negotiated settlement is a stretch by any standard.  Management went into negotiations insisting that it needed lower wages to compete in the global economy.  The choice offered UAW members was whether to work at half-wages or not at all.  It is an ultimatum faced by more and more workers in North America.

Map 1 summarizes the effects of globalization on the North American auto industry to date. 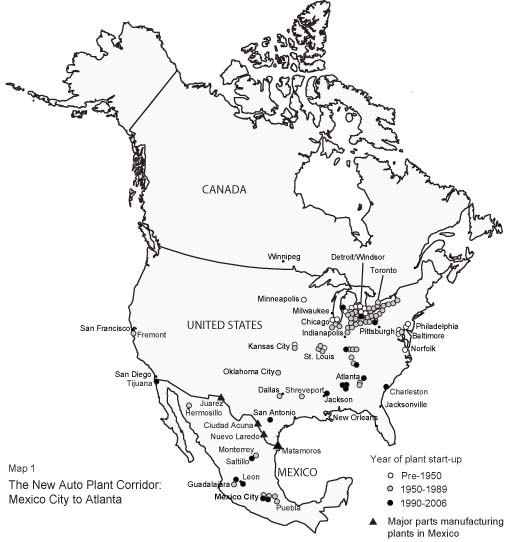 The map identifies three distinct periods in the history of the automobile industry:

Another significant feature of Map 1 that deserves notice is the string of major parts manufacturing plants in Mexico, including those owned by Delphi, that are strategically located near the new southern auto plant corridor. 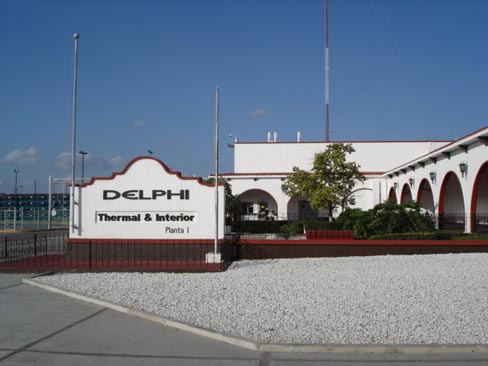 The globalization of the US automobile industry has been a steady migration to the South in the relentless pursuit of cheap labor.  Chart 1 offers the specifics of the driving force behind this relocation. 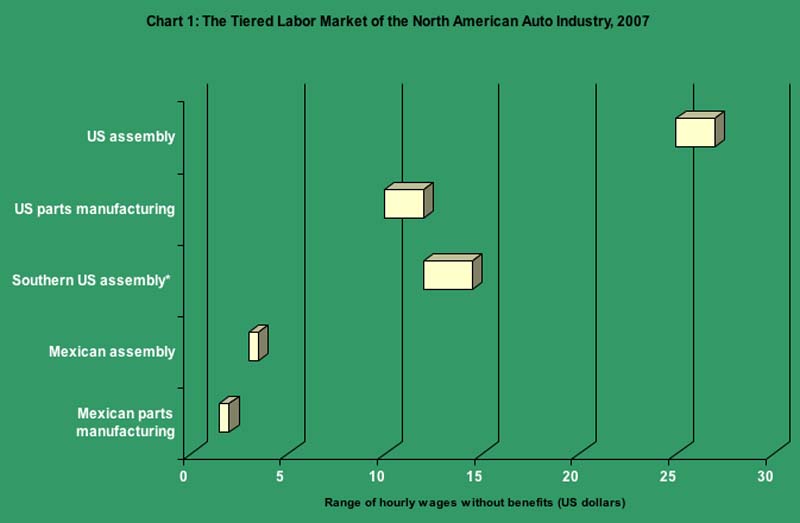 Chart 1 presents the latest data on the tiered labor market of the North American auto industry.  The disparity of wages between North and South is remarkable:

And make no mistake about it — as the Delphi agreement clearly shows, it is the prevailing wages in the South that are dictating the wage trends of the industry.  The much-lamented global “race to the bottom,” assumed by many observers to be a third-world phenomenon, is well underway in North America.

The grim statistics presented in Chart 1 and the trends depicted in Map 1 suggest that the bottom in nowhere in sight, and the dilemma faced by the UAW in the Delphi negotiations shows that the unions alone can not turn the tide of labor devaluation that has been launched against them.

The battle against the ravages of globalization must be supported by all working people in North America and must bridge the same international borders that capital has.  Failure to present a united front is a losing option.

A starting point for debate on a winning strategy will be presented in “The Fight of Our Lives: The War of Attrition Against U.S. Labor” forthcoming in MRZine.

Richard D. Vogel is a political reporter who monitors the effects of globalization on working people and their communities.  Other works include “The NAFTA Corridors: Offshoring U.S. Transportation Jobs to Mexico” and “Transient Servitude: The U.S. Guest Worker Program for Exploiting Mexican and Central American Workers.”   Contact: <irvogel@aim.com>.