I saw Michael Moore’s SICKO last week.  By now who doesn’t know that SICKO is a savage and hilarious demolition job on the US health care insurance corporations and their self-serving myths about the national health care systems of countries like Canada and Cuba?

But this is not a review of SICKO.  I’ll just say go see it and then get involved in the fight for single-payer national health insurance, like the plan embodied in the labor-backed Conyers bill, HR 676. 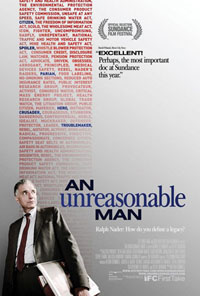 Soon after I saw SICKO, I rented the recent documentary about Ralph Nader, An Unreasonable Man.   In it, we follow Nader’s career from crusading young lawyer taking on General Motors to the presidential campaigns of 2000 and 2004.

The film gives us an earful from Nader’s critics like Todd Gitlin and Eric Alterman, supporters of the Democratic Party, who vilify Nader as a reckless egomaniac heedless of the cost of his campaign, namely the “election” of GW Bush as US President in 2000.

Gitlin and Alterman don’t interest me, except as exemplars of the Democratic Party line scapegoating Nader as the reason for Gore’s loss.

What struck me after watching An Unreasonable Man was the “sickening” sight of Michael Moore, Susan Sarandon, and others, in the full flood of liberal panic, retreating from their principled and brave support of Nader in 2000.  It was excruciating to watch their cringing backing of Kerry and the Democrats in 2004.

We see Moore’s exhortation to young people in 2000 to vote for their beliefs dwindle down to scolding them in 2004 not to vote “to make yourself feel good for 10 minutes,” rather like a worn-out parent handing the keys to the car to a teenager.  Then there is the revolting scene of Moore and Bill Maher kneeling in front of Nader begging him not to run in 2004. 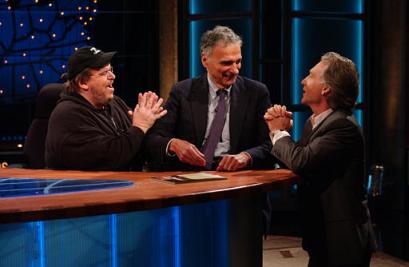 Now in 2007, Moore is asking the American people to terminate private health care corporations.  Given the wealth and power of the medical industry, this is virtually a revolutionary demand.

Who does Moore think will back him in this fight?  The Democrats?  Only some 70 or so Democrats in Congress have co-sponsored the Conyers bill.  Presumptive Democratic 2008 presidential candidate Hilary Clinton, by Moore’s own documentation in SICKO, is the number two recipient of health insurance corporation’s political donations.

Voting in the Democrats across the board in 2008, which is a likely outcome after 2006, will neither bring us national health insurance nor — as we have already seen, just ask Cindy Sheehan — an end to the Iraq war.

The medicine for Moore’s illness?  A better understanding of the US capitalist system, which buys and uses both Democrats and Republicans on its relentless march towards war and economic and ecological disaster.

We can only hope that Moore will recover from his 2004 “liberal panic attack” and make up for this period of sickness by once again kneeling to Ralph Nader or Nader’s successor, this time begging him or her to run an independent campaign in the interests of working people.

Get well, Michael.  We need you healthy and ready to march.