The history of colorful political art on the US Left goes back, arguably, to black and white versions of the socialist cartoons borrowed from the European press in the 1890s; the Masses magazine (1911-17) that launched a major artistic trend before being suppressed for opposition to the First World War; and the silkscreen prints of the late 1930s.  But the later phases of poster art, drawing their inspiration from the 1960s social movements, did not really emerge until the very end of the decade.  They owed a great deal to the Bay Area, the burst of energy surrounding the Acid Rock, the Underground Comix, and the political shockwave set off by the Black Panthers in Oakland.  The associated energies ebbed by the end of the 1970s, after a glorious phase of feminist art, murals, and so on.  But political poster art has never quite disappeared — not even when the impetus seems to have moved largely to the Web, and venerable operations like Northland Posters have given up the ghost. 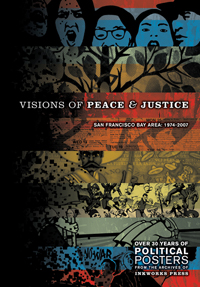 Inkworks in Berkeley has a very special role in this whole story.  It was always a matter of radical politics and never a matter of politics only.  A half-dozen short essays at the outset of Visions of Peace & Justice explore the origins of the collective, bringing together the rainbow of resistance movements warming the hearts of locals and others far-flung across the planet.  Inkworks’ work process, the collaboration of different talents and inclinations, is an important part of the story.  But so are the issues of style, once the favorite subject of art historians, though in recent decades shunted aside by radical scholars for discussion of the social history of the art form.  Readers of this book will want to take in all the explanatory words, but they will want to spend most of their time looking at the images, posters reproduced from the original.

What a wealth of images there is!  One can easily find the Cuban influence, perhaps made most famous in Che posters, the heavily contrasted colors overlaid on appeals  for global revolution and in support of the most universal human emotions.  Chilean styles can be also found here — although these are more complex and subtle — especially in posters about Central America.  African revolutionary art is very much present, likewise Chicanismo, mirroring the vibrant mural work in California and beyond.  Here and there, I see strong hints of early Soviet modernism, or what we might call “scratchboard modernism” owing to the influences of 1920s European radical expressionists.  Mike Alewitz, a popular labor muralist whose work mixes together traditions, occupies a couple of pages.  Even underground comix (mainly the work of Spain Rodriguez) sneaks in here.  Gay and Lesbian support art seems to lean toward experimental use of photographs.

But no inventory — and mine only begins to tell the story — can exhaust what the eye can see and the mind can absorb on multiple readings.  This is more than a political art book, it is a political SOURCE book because artists, and not only self-consciously radical ones, can study it, absorb the parts that interest them and that they find useful.  If I happened to be thinking of a gift book for the holidays now months ahead, this may well be the one that I would choose.

Paul Buhle, Senior Lecturer at Brown University and the authorized biographer of C.L.R. James, is the editor of a half-dozen educational comic art volumes now in production.