The corporate media is abuzz with the notion that there is a Palestine-Israel peace conference now happening in Maryland.  That this claim is being taken seriously six years into the Cheney Administration is another remarkable proof that, in this bought-and-paid-for corporate capitalist society, journalism is doornail-dead.

The real truth, as reported (as a low-paragraph aside, of course) in a late-night thought piece posted on the New York Times website on November 26?  “Privately, officials also express confidence that the Arab world might finally get behind the effort out of fear of Iran’s rising influence in the region.”  In other words, the real design behind this charade is to see whether fear of Iran’s rising prestige in the Middle East might convince the rape-victim-whipping Saudi “royal” family to coerce Mahmoud Abbas into finally caving in completely.

There is, of course, a great deal more that could be said about the Orwellian nature of the Annapolis proceedings and their “coverage” in the media.  For the moment, though, it seems to me that the most important thing is to do to the emerging propaganda stream what C. Wright Mills did to the Grand Theorists and Abstracted Empiricists in his classic, The Sociological Imagination — namely, translate the confusion back into plain, logical language.

With this in mind, here are four of the main items needing this service so far:

Translation: We are here, once again, to impose our vision.

2. “[T]he terror and violence preached by Palestinian extremists is the greatest obstacle to a Palestinian state.” (Bush, November 27)

Translation: As Adolf Hitler once remarked, these unruly Jewish bottle-throwers in Warsaw are forcing us to act as we do.

Translation: You’ll get what we and Israel give you, you will call it a viable state, and you will like it. 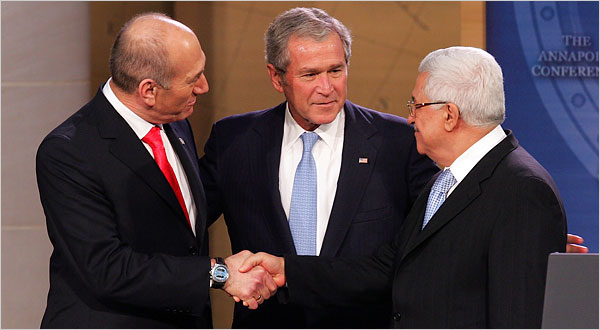 Translation: By not wearing a Palestine flag on my lapel, I, Mahmoud Abbas, do hereby solemnly swear to faithfully execute my role as hand-picked shill and to uphold its cardinal duty of being “responsible,” which I understand to mean never asking for anything other than what I shall be offered.

Luckily, Palestinians are all too aware of the true character of the Annapolis Double-Speak Festival.  Over 100,000 Gaza Strip residents are now protesting it.

Michael Dawson is a writer and sociology teacher living in Portland, Oregon, author of The Consumer Trap: Big Business Marketing in American Life (University of Illinois Press, 2005) and Automobiles Ueber Alles: Capitalism and Transportation in the United States (a book forthcoming from Monthly Review Press).  Visit his blog: <www.consumertrap.com>.