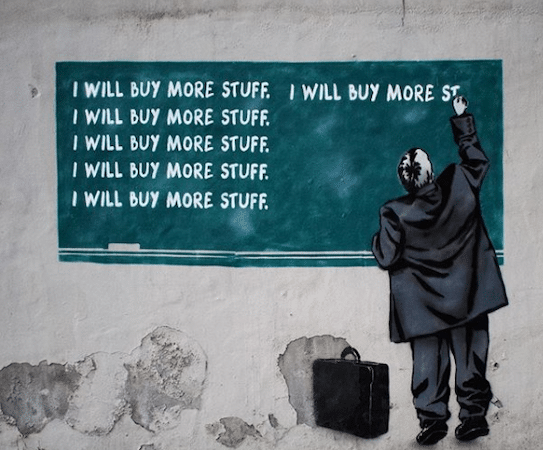 Richard Heinberg is a very important scholar and an apparently lovely human being. His books are always penetrating, and both his contribution to and his review of Michael Moore’s corporate-green-censored movie, Planet of the Humans, demonstrate his continuing efforts to speak crucially unheard truths.

We have built our national and global economic systems on the expectation of always using more. A successful energy transition will necessarily entail moving away from a growth-based consumer economy to an entirely different way of organizing investment, production, consumption, and employment.

A “consumer economy”? Really? Your analysis is that “consumers,” the aggregated acquirers and users of goods and services, are in charge of “our” economy?

This, of course, is a hypothesis, not an indisputable fact. Its natural and obvious rival is the assertion that we actually live in a “capitalist economy,” i.e., a productive-and-distributional order in which money-investors, not product-users, tend to dominate the course of events.

It remains fascinating (and disheartening) to see even courageous and insightful figures like Richard Heinberg continue to opt for the “consumer economy” framing of reality.

Anybody who does this does, ipso facto, two rather remarkable things:

My own guess is that, by choosing “consumer” over “capitalist,” well-meaning and important thinkers like Richard Heinberg somehow imagine they are making their ideas more palatable to a wider audience, on the thesis that talking about capitalism is just too radical.

But reality is reality, no matter how fearful of describing it we’ve all been trained to be. And we aren’t likely to sweet-talk our way around human history’s richest and most deniable power structure. Either we start talking about the Emperor and His Old/New Clothes, or we don’t.

“Consumer economy” is a way of doing the latter.