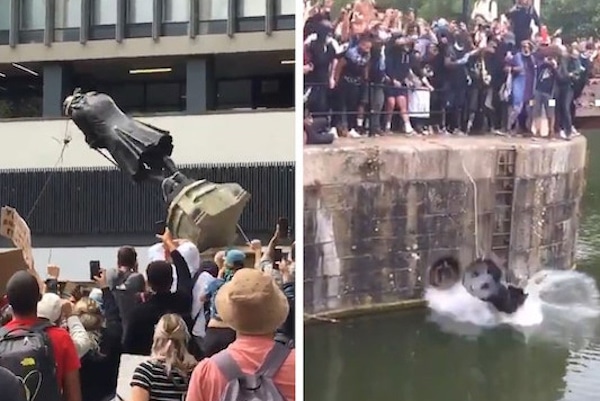 The statues are coming down. The most recent avalanche began in the United States after the murder of George Floyd at the hands of police and the uprising it occasioned. In Philadelphia, the city removed a statue of former police commissioner Frank Rizzo; the mayor agreed with the protesters who called for its immediate removal, saying that the “statue is a deplorable monument to racism, bigotry, and police brutality for members of the Black community, the LGBTQ community, and many others.”

Across the U.S. South, protesters took aim at Confederate statues. The target was often Confederate generals—General Robert E. Lee in Montgomery, Alabama, and General Williams Carter Wickham in Richmond, Virginia. In some cases—such as in Mobile, Alabama—the city authorities removed the statues themselves. In others—such as in Alexandria, Virginia—the statue’s owners (the United Daughters of the Confederacy) finally removed them after long campaigns of public pressure.

On Sunday, June 7, the momentum shifted across the Atlantic Ocean to Bristol, England, which was one of the key cities of the transatlantic system of slavery. Here, protesters removed the statue of Edward Colston and threw it into the River Avon. Colston made his money in the trade in human beings. The Society of Merchant Venturers, in Bristol, which emerged out of the slavery trade, responded to the removal of the statue by saying that it will “continue to educate itself about systemic racism” and will “never forget the 12 million enslaved human beings.”

On that same day, a protester went to the statue of Winston Churchill in Westminster, London, and painted “was a racist” under the former prime minister’s name. The slogan was removed shortly thereafter. In Brussels, Belgium, protesters wrote “shame” on the statue of Leopold II, the butcher of the Congo.

It is clear that no society should celebrate people like Robert E. Lee, Winston Churchill and Edward Colston. These were men who defended enslavement and colonialism; there is no debate about that. Over the years, even the family of Robert E. Lee has asked for his statues to be removed from public display: One of Lee’s descendants said in 2017 that he believes that the Charlottesville, Virginia, statue of his ancestor “has become a symbol of evil nationalism.” Another descendant of Lee’s wrote an op-ed in the Washington Post on June 7 calling for the removal of his ancestor’s statue in Richmond, Virginia.

So much for the statues.

History has not been written by the likes of the protesters who brought the statues down; it is the men depicted in the statues who have had that power. That’s our tragedy.

To remove a statue is important because the existence of the statue is a standing rebuke to the humanity of the people who must walk past it every day. But more is needed: what the men depicted in these statues succeeded in establishing in the world must also be removed.

The removal of Colston’s statue is significant. Behind it, however, lingers an atrocious reality.

In 1833, when the British parliament passed the Slavery Abolition Act, it promised “compensation” not to the human beings freed from this brutal system, but to their “owners.” From 1835 to 2015, the British exchequer paid the “owners” and their descendants £17 trillion. This is an extraordinary amount of money. The precedent for this came from the French. When Haiti won its independence from France, the French sent their warships in 1825 to demand that the new republic pay compensation for the loss of slavery. Between 1825 to 1947, Haiti paid France $21 billion for the emancipation of the Haitian people.

Meanwhile, countries like Haiti and Jamaica had to borrow money from governments and banks in Europe to finance their survival. That borrowing escalated over the last several decades as these countries faced enormous challenges, including natural disasters and coups promoted by the United States of America. The desolation of the finances of these countries continues.

Today, a reasonable estimate of the external debt of the developing countries—many of them former slave plantations—sits at $11 trillion, with debt servicing due this year of $3.9 trillion. Attempts to postpone or cancel the debt have been futile as U.S. and European governments and banks have been lukewarm to the ideas on the table. They want their money. This money, however, should not be sucked out of the formerly colonized countries; we need to use those resources toward the dire needs of our societies.

It is one thing to knock down a statue; it is another to cut down the debt.

In The Wretched of the Earth, Frantz Fanon wrote,

Colonialism and imperialism have not settled their debt to us once they have withdrawn from our territories. The wealth of the imperialist nations is also our wealth. Europe is literally the creation of the Third World.

Bring down the statues, surely. But more than that: cancel the debt and provide reparations to the formerly colonized for the centuries of theft and brutality.