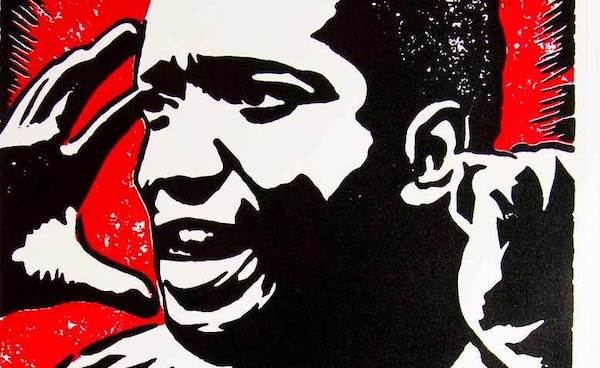 The mass protests engulfing the U.S. in the wake of the killing of George Floyd last month have been described as the biggest the country has seen since the 1960s.

At the start of that decade, iconic figures such as Martin Luther King and Malcolm X spearheaded the fight for civil rights for the African-American community. Following the assassinations of these two men, the Black Panthers emerged as the most militant challenge to the institutional racism of the U.S. political system.

This organisation was founded by Huey Newton and Bobby Seale on the West Coast in 1966 but arguably the most advanced political activist and thinker among the ranks of the Panthers was Fred Hampton, based in Chicago.

Many demonstrators on this new upsurge of resistance have worn t-shirts featuring Hampton’s image and his key message that the fight against racism in America must also be a fight against capitalism.

More clearly than anyone else in the senior leadership of the organisation, Hampton understood both the intertwining of racism and capitalism and the need for united action from all oppressed sections of U.S. society in the name of socialism.

This advanced class consciousness ultimately cost Hampton his life in 1969, as he became a target for the ruthless machinery of state terrorism orchestrated by J. Edgar Hoover’s FBI. Racist cops in Chicago murdered Hampton with a callousness that matches that of the killers of George Floyd. The year before his brutal murder, Hampton said:

We never negated the fact that there was racism in America, but we said that the by-product, what comes off capitalism, that happens to be racism. That capitalism comes first and next is racism. That when they brought slaves over here, it was to make money. So first the idea came that we want to make money, then the slaves came in order to make that money. That means, through historical fact, that racism had to come from capitalism. It had to be capitalism first and racism was a byproduct of that.

Capitalism is the enemy

Fred Hampton was born in a working class suburb of Chicago shortly after the Second World War. His parents were both active trade unionists. He opted to study law at college with the explicit intention of assisting African Americans deal with the notoriously racist Chicago Police Department. Even as a teenage activist, Hampton perceived that capitalism was the real enemy, not white people. A friend noted:

Already at that time, his brother Bill could say, He was a leader to whites as much as to the blacks at the school. On one occasion, friends recall, Fred met with a group of long-haired, leather-jacketed white toughs who had been mainly involved in the troubles. After a long and heated discussion, Hampton, or “Hamp” as his friends knew him, convinced them it was “the system” that was oppressing them.

He demonstrated exceptional organisational skills as a young activist in the 1960s for the NAACP. When he joined, his local branch had two members–within a few months it had 700! This was the most prominent pressure group for black civil rights at the time with an emphasis on gradual and legal reforms to the apparatus of segregation.

The assassination of MLK in 1968, however, confirmed for Hampton the futility of appealing to the political establishment for an end to the second-class status of African-Americans.

Inspired by the initiative of Newton and Seale in California, he set up a Chicago branch of the Black Panther Party for Self-Defense in the aftermath of King’s death and the consequent wave of urban rebellion in U.S. cities.

The Panthers had grabbed the national spotlight with their distinctive black leather jackets, berets and shades, and their audacious willingness to utilise the Second Amendment to confront racist cops on the street with their own guns. The BPP devised a concise 10 Point Programme that directly addressed the needs of African Americans for equality. Point 7 highlights how little has changed in the decades since:

We Want An Immediate End To
Police Brutality And Murder Of Black People.

We believe we can end police brutality in our Black community by organizing Black self-defense groups that are dedicated to defending our Black community from racist police oppression and brutality. The Second Amendment to the Constitution of the United States gives a right to bear arms. We therefore believe that all Black people should arm themselves for self-defense.

The BPP also campaigned forcefully against the Vietnam War; drawing particular attention to the fact African-Americans represented 11% of the population but 25% of combat deaths in the conflict.

Apart from their media savviness, Hampton was attracted to the Panthers by their engagement with deprived black communities in the form of free breakfasts for children and free clinics for all ages. The organisation also funded research into sickle-cell anaemia that disproportionally affected black Americans. The BPP ran educational courses in the law and black history to facilitate the self-confidence of those enduring racist harassment and prejudice at the hands of the official institutions of power.

Hampton commented on the importance of combatting the ideology of racism that the U.S. capitalist state had spent centuries propagating:

Because if they don’t have any education, then, they’re nowhere. You dig what I’m saying? You nowhere. Because you don’t even know why they doing what they doing. You be, you might get caught up in the emotionalist, uh, you understand me? You might, you know, you done caught up, and caught being poor, and they want something. And then, if they’re not educated, they’ll want more, and before you know it, they’ll be capitalist, and before you know it, we’d have Negro imperialists.

Hampton clearly perceived that without a socialist dimension, the struggle for civil rights could be co-opted by the ruling class to create a black middle-class that would only reinforce the institutions of oppression. The subsequent careers of black Americans such as Barack Obama, Colin Powell and Condoleezza Rice proved he was right.

Fred Hampton was a brilliant organiser and charismatic speaker and rapidly rose through the ranks of the BPP to become Chair of the Illinois branch and deputy chair of the national organisation. Possibly his finest moment was speaking to a conference of rival gangs in Chicago in 1969 that he had organised in order to overcome their internecine antipathy and to re-direct it against the real enemy: His brother Bill noted:

He was organizing hospital strikes. He also founded what he called the Rainbow Coalition of poor whites, Blacks, Latinos, Indians and Chicanos in the city of Chicago to fight against oppression. Fred took the Young Lords, a Puerto Rican gang, and the Young Patriots, a white gang from the Uptown area, and made all these groups into a political organization because he was trying to get them to see that racism wasn’t the only problem–that racism was a byproduct of capitalism.

Hampton’s prominence inevitably attracted the baleful attention of the Chicago PD. In 1968 he was accused of robbing a street vendor of $71 worth of ice cream. He denied the charge, sceptically observing:

Hampton was incarcerated anyway to await trial by a judge whose comments after the trial indicated the charge was a poorly disguised political stitch-up:

This defendant admits to me that he advocates armed revolution. I cannot take the responsibility of allowing him to remain at large.

A few months later, Hampton was released on bail and threw himself straight back into political activity. In one of the last mobilisations he was able to organise, Hampton led a march to support striking workers at a Chicago tractor plant that included thousands of people from all sections of the local working class-black, white and Puerto Rican.

By this point, Hampton’s charisma, organisational ability and breadth of support had made him the prime target of J. Edgar Hoover’s Hoover’s red-baiting FBI. Richard Nixon’s election victory in 1968 essentially gave Hoover a blank cheque to eradicate the BPP leadership with extreme force.

The Bureau set up a secret and wholly unconstitutional section known as the counter-intelligence program-or COINTELPRO-with the stated intention to “Prevent the rise of a messiah who could unify and electrify the militant black nationalist movement”.

In the early hours of 4th December 1969, armed officers burst into Hampton’s apartment in Chicago and shot him to death in his bed. A police spy had slipped a sleeping pill into Hampton’s drink the night before to ensure he would not be able to fight back when the raid took place. Hampton’s heavily pregnant girlfriend narrowly escaped death as she slept beside him.

Ten years later, the Hampton family were awarded nearly $2 million by the Chicago police in a tacit admission  that his murder was nothing short of an extra-judicial execution.

Why they killed him

Fred Hampton’s horrifying death, aged just 21, is a brutal reminder of the irreformable nature of the U.S. capitalist state, which has most recently been exposed again to millions by the death of George Floyd.

Following the killing of Hampton, the rest of the Panther leadership disintegrated due to a combination of devastating repression at the hands of the FBI, and their naïve faith that an armed minority could topple the government.

Hampton’s tragically short life, however, is a powerful reminder that an explicitly socialist message, allied to mass mobilisation in workplaces and on the streets, has the potential to shatter the racial divisions that have sustained American capitalism since its inception.

One of his supporters, a white nurse, summed up Hampton’s legacy:

It wasn’t the guy next door, but it was the power structure, Mayor Daley, and the industrialists. This and his ability to work with everybody is why I guess they had to kill him… Fred said that if there’s problems with blacks, they (the ruling class) can isolate it; but when you get white and black together, they have to deal with it. I think that’s why he was so dangerous to them and had to be killed.