Carl Oglesby was once the president of the original Students for a Democratic Society (SDS).  Before that, he was working for a defense contractor.  His last project with the company was to develop a method of delivering Agent Orange so that it would cover the Vietnamese jungle (and the humans therein) with the chemical as thoroughly and cheaply as possible.  He was typical of his generation.  He was a political liberal, was married, and believed in his work.  Then a moment of cognitive dissonance occurred when John F. Kennedy was murdered and his company refused to lower the flag to half-mast until ordered to do so by the corporate headquarters.  Something clicked in Oglesby’s brain and he suddenly realized that there were fellow citizens that did not like even the mild liberalism of JFK.  These citizens, he realized, enjoyed profiting from war and saw their mission as saving the world from anyone and anything that opposed US capitalism.  A year later, Oglesby was a member of SDS.  Not long afterwards, he had quit his job and began traveling around the country speaking and recruiting for the organization.

For the next five or so years, Carl Oglesby devoted a good portion of his life to SDS and opposing the war in Vietnam.  His opposition was based on his belief that the war was contrary to the ideals of the country he lived in.  This belief was common among many of the war’s opponents who believed it to be a mistake.  Oglesby took it a step further, however, and realized that the war was more than a mistake.  He concluded that it was systemic.  From there he began to organize.  His work took him to southern Vietnam on a fact-finding tour, Paris for a War Crimes Tribunal, and even to Cuba.  Although his recollection of the positions of members of the War Crimes Tribunal do not jibe with essays written at the time, this might be attributed to Oglesby’s use of memory over recorded history — always a potentially dangerous substitution.  In between, he lived in several cities in the United States and met hundreds of people from many walks of life. 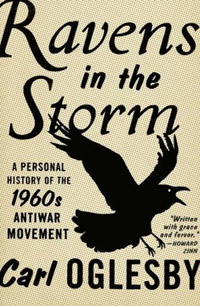 Recently, his memoirs of the period, titled Ravens in the Storm, were published by Scribners.  The book is an interesting read that chronicles Oglesby’s political life during the period and his opinions of the organization and the greater movement that he worked in.  For those who were involved with SDS and other New Left organizations during the 1960s and early 1970s, there will be moments when you find yourself disagreeing with Oglesby’s impressions.  There will also be times when you find yourself in total agreement.  No matter what, the book is an honest and insightful chronicle of the time and its politics.  Oglesby was always a presence.  His brand of politics was what former Vice President Spiro Agnew might have characterized as radical-liberal.  He was never a Marxist but Marxism informed his analysis.

The book opens with an innocence that is slowly lost as the war grinds on and the repression against the movement intensifies.   By the end of 1968, Oglesby finds himself isolated from the very organization he helped build.  His continued belief that there was still room for dialog with members of the war establishment was met with scorn and disdain by most of the rest of the SDS leadership and he was drummed out of the organization.  This belief does seem almost naïve by that time, given the murders of Martin Luther King, Jr. and Bobby Kennedy earlier that year.  To Oglesby, however, the alternative of a Marxist-Leninist revolution being offered by his comrades — among them many future Weathermen — was unreal and based on frustration and anger, not on a clear assessment of the political reality.  To his credit, he acknowledges that he misread the true intentions of the counterintelligence programs (Cointelpro) being used against SDS.  He thought they were merely collecting data, not trying to destroy the group.  The future Weathermembers and many others knew better, even though their response was apparently just as wrong as Oglesby’s diagnosis.

Like many former SDS members, including some former leaders of the Weather Underground, Oglesby blames Weather as much as he blames Cointelpro for the demise of SDS.  Although I personally believe this explanation ignores the role of history and replaces that role with personalities, I must admit that Oglesby does the best to make a case for his position.  One can still hear the bitterness he felt at his dismissal by the leadership cadre and his disdain for their politics and arrogance.  To his credit, there is little vindictiveness on these pages, just what remains of the bitterness.  The story of the demise of SDS will always be one that provokes spirited discussion.  However, there is no longer any need to take a side in the argument.  Instead, we should learn from that episode and the rest of SDS’s history.  Ravens in the Storm is a valuable and interesting addition to that history from an important member.

Ravens in the Storm is a book about the battles against the evils of war, racism, and US imperialism.  It is also about the internal battles of an organization that formed to fight those evils.  Heartfelt and impassioned, the story Oglesby tells on these pages is instructive and hopeful.  It is also occasionally tragic.  The quixotic struggle of a generation of US residents to end a terrible, immoral war has always been a good tale that should inspire.  Oglesby’s version does not fail.  In fact, it excels.  His ultimately even-handed description of the rise and fall of SDS has it all — innocence, anger,  paranoia, police repression, friendships made and friendships unmade.  Those who were there can read it, remember, and learn.  Those who weren’t can read it and learn.

Ron Jacobs is author of The Way the Wind Blew: A History of the Weather Underground (republished by Verso). His first novel, Short Order Frame Up, is published by Mainstay Press. He can be reached at <rjacobs3625@charter.net>.