At the height of the Iranian revolution in the winter of 1979, French philosopher Michel Foucault described what he was seeing in Tehran as “perhaps the first great insurrection against global systems, the form of revolt that is the most modern and the most insane.”

“Islam,” he wrote, “– which is not simply a religion, but an entire way of life, an adherence to a history and a civilization — has a good chance to become a gigantic powder keg, at the level of hundreds of millions of men.”

Such words of praise about the Iranian uprising are probably the very reason few have even heard of Foucault’s dispatches from Tehran for the Italian newspaper, Corriere della Sera, in 1978-79.

Twenty-nine winters later, the Islamic Republic of Iran is more independent, stable, confident, and technologically advanced than ever, while it has remained the most serious and continuous challenge to US hegemony in the world.  But what can explain the survival of the outcome of such revolt?  What will the future look like for Iran, with its young population who mostly have no firsthand experience of that revolt?

The rise of the first non-clerical president of Iran, Mahmoud Ahmadinejad, can point to some answers.

For 16 years, Iranian government was in the hands of the Euro-American-educated bureaucrats who were gradually departing from the specific subjectivity (rejection of the Eurocentric “universals,” in Foucault’s term) which brought about the Iranian uprising of the 1979.  The spectre of neo-colonial modernity slowly started to dominate everything, from economy to politics, and the two consecutive administrations picked up a similar project of capitalist modernization which the Shah had previously failed to continue, and its gloomy consequences started to weigh on the people, too: corruption, incompetence, and socio-economic inequality. 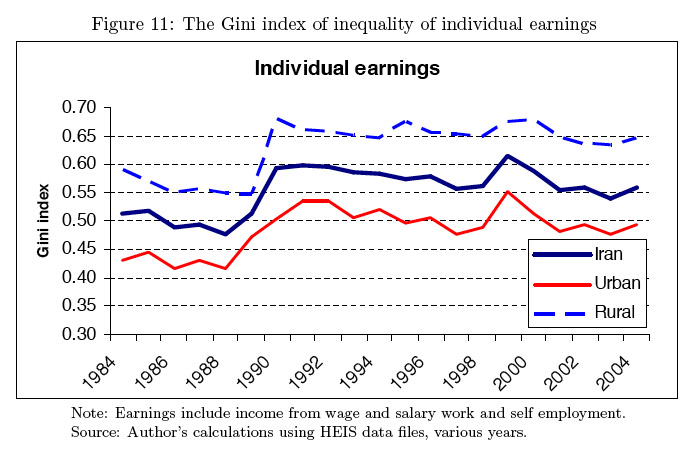 The elite’s vision of economic and political “reform” was transforming Iran into a country very similar to what it had been under the Shah, but with an Islamic posture.  At the same time, Europe and the US were not only happily watching Iran practically undo its revolt but even assisting and accelerating the process.

Then came the shock.  Ahmadinejad, an outsider to the Iranian establishment who was never taken seriously by journalists or most politicians, won the election.  Compared to his main rivals, he had lower religious credentials, less support from the elite, less money for campaigning, and gave zero promises to normalize relations with the US.  Instead, he traveled much more around the country and met face-to-face with the forgotten majority of Iranians, talked more about economic equality, and promised more of a serious war on corruption.

He simply pledged a return to the abandoned values of the 1979 uprising, with independence, freedom, and justice at the center.  (His promises of a more relaxed attitude towards the religious code are reflected, for instance, in Iran’s talks with the British musician Morrissey to be one of the first non-Iranian rock acts in the country after 1979.)

If Western journalists left the northern part of Tehran more often, they would be able to observe how much Ahmadinejad represents a passionate revival of the core values of the uprising.  They would also discover how Islam is functioning as the best, but not the only, carrier of those values.

Like many Iranians who have lived in the West for the past seven or eight years, the rise of Ahmadinejad (as well as travels to other parts of the Middle East) has incited a radical change in the way I see myself, relate to Iran, and view the world.  I have finally realized what it was that the entire Iranian nation revolted for, and how valuable this subjectivity is to empower the world of the marginalized, the poor, and the oppressed.

This doesn’t mean I don’t see the unfortunate intolerance the Iranian government sometimes shows toward dissent and difference.  But I argue that such intolerance is a direct consequent of the existential threat that the big powers have posed towards Iran since the day it succeeded in its revolt.

As a post-revolutionary Iranian, who is not religious a single bit, I am proud of what my parents’ generation did in 1979 and I do whatever I can to protect and improve the Islamic Republic of Iran in its promises of independence, freedom, and justice.

This has predictably led to my being labeled as an “agent of the regime” by many exiled Iranians who always do that to anyone they disagree with.  But you will see millions like me if you ever visit Iran without being trapped in those parties in northern Tehran.

Hossein Derakhshan, aka hoder, is a blogger, journalist, and multimedia developer who emigrated from Iran to Canada in 2000.  A different version of this article appeared in the Guardian.