It’s become quite fashionable for journalists to report on the diminishing popularity of the Iranian president, Mahmoud Ahmadinejad (for example in the Independent, the Herald Tribune and the New York Times), especially focusing on his economic policies, which were seen as one of the main reasons he was elected.

But facts on the ground suggest Ahmadinejad is as popular as ever.  Indeed, his allies have won six consecutive elections in the past six years: the Tehran council’s election in 2002 when all big figures of the reformist parties were allowed to run; the controversial parliament elections in 2003 which, one has to admit, was not competitive due to the disqualification of many reformists; the presidential elections in 2005 with the presence of three strong reformist rivals; the city council’s elections in 2006 where reformists were again allowed to compete but won a small percentage of seats; the recent parliament elections, with strong rivals from both his former allies and also reformists.

One may argue that these results are not truly representative, but how about the results of a recent American survey by Terror Free Tomorrow, a non-partisan research organization that boasts John McCain, Lee H Hamilton, William H Frist, and Thomas H Kean on its board?

Satisfaction with Ahmadinejad’s economic policies, the poll results show, has nearly doubled since last June: 42% now think that “economy is headed toward the right direction,” up from 27% last June.

Even in terms of inflation and unemployment, more Iranians now think Ahmadinejad’s government is doing a good job, and 42% now think his policies “have succeeded in reducing unemployment and inflation,” whereas in June only 33% thought so. 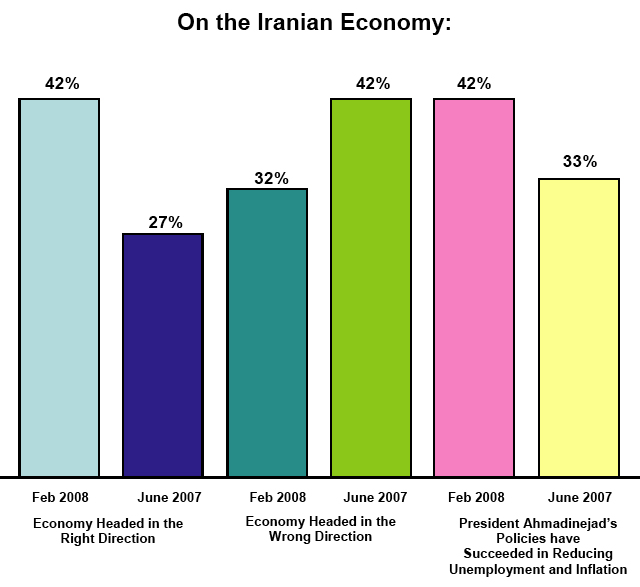 The most striking aspect of the anti-Ahmadinejad reporting is that the Iranian economic experts who are usually quoted are not only close allies of his rivals, such as former president Akbar Hashemi, but also sharply differ with him because of their free-market, minimal-government approach to power.

Ironically, one critic, Saeed Leylaz, editor of a financial daily newspaper called Capital, or Sarmayeh.  Laylaz also happen to have been an economic adviser to Rafsanjani.

Which should we believe — journalists or elections and polls — when they are drawing such different conclusions?  Is there a chance that journalists are falling into a trap laid by politicians, who are turning their hopes into facts?

Hossein Derakhshan, aka hoder, is a blogger, journalist, and multimedia developer who emigrated from Iran to Canada in 2000.  A version of this article appeared in the Guardian.