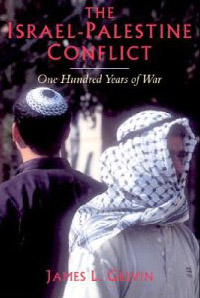 Those who have noted, but not read, James Gelvin‘s The Israel-Palestine Conflict: One Hundred Years of War may well ask themselves, “do we need another history of the Palestinian-Israeli conflict?  What more can possibly be said about this topic?”  Indeed, there are several serviceable histories of the conflict currently in wide use as textbooks and general introductions for educated non-specialists.

For many years the best of these has been Charles Smith‘s Palestine and the Arab-Israeli Conflict, 5th ed. (2004).  I used it in my Stanford University lecture course of the same title for many years.  It is comprehensive, adopts an approach I consider reasonable, and has the distinct merit of including the word “Palestine” in the title.  Note, that I do not claim that Smith is “balanced” or “unbiased.”  Such terminology is never helpful in evaluating historical controversies and has been abused repeatedly in discussion of this subject.  Using these terms could only indicate what I have just said, that Smith adopts an approach I consider reasonable.  That is to say, it presents a historical interpretation that can be well supported by the available historical evidence, although only a naïf or an ideologue would claim that it is the only possible interpretation the evidence can support.

Other useful textbooks include the late Deborah Gerner‘s One Land, Two Peoples: The Conflict over Palestine, 2nd ed. (1994), Mark Tessler‘s A History of the Israeli-Palestinian Conflict (1994), Avi Shlaim‘s The Iron Wall: Israel and the Arab World (2001), Ann M. Lesch and Dan Tschirgi‘s Origins and Development of the Arab-Israeli Conflict (1998), and Ilan Pappé‘s A History of Modern Palestine: One Land, Two Peoples, 2nd ed. (2006).  The principal disadvantages of Smith’s text, and to varying extents the others cited above, are: excessive detail for an introductory course; a narrowly political narrative that does not seriously consider matters of culture and consciousness; lack of a conceptual framework, which means that the default understanding of the conflict is a moralistic one; and an understated and exceptionalist presentation of the role of the United States in the conflict, as if domination of the Middle East in alliance with the strongest regional military power were not the normal thing that a global power would seek in the twentieth and twenty-first centuries.

Gelvin’s volume is distinguished from the others cited above because it is concise; written in a witty and engaging style; profusely illustrated with photographs, facsimiles of stamps, and maps; and successfully uses poetry and other cultural materials to inform the political narrative.  Most importantly, and this remedies the biggest flaw of all the other existing texts, Gelvin’s book is theoretically informed without being jargonistic; and it is equally skeptical of the nationalist mythologies of both parties to the conflict without indulging in false moral equivalencies.  While debunking the national mythologies of Zionism and Palestinian nationalism, Gelvin has a humane and reasoned approach to the plight of both peoples.

He situates the Zionist project firmly within the context of European colonialism and the era in which it was considered (by Europeans, of course) to be an unequivocally good thing that Europeans should populate the world, disseminate their culture, and bring civilization to Africa and Asia.  It was also considered the right of European powers to draw boundary lines dividing these territories among themselves.  Such contextualization is sure to prompt much wailing and moaning in certain quarters.

Gelvin is equally unforgiving in contextualizing Palestinian nationalism.  A distinct Palestinian national identity emerged in response to the defeat of Faysal ibn Husayn’s Arab Kingdom of Syria in July 1920 by French forces at the Battle of Maysalun.   This left the people of Southern Syria, that is, Palestine, no choice but to organize themselves as Palestinians and to articulate their national movement in relation to the struggles against Zionism and the British mandate which distinguished their experience, during the period between World War I and 1948, from that of their Arab neighbors in greater Syria — the region that became Jordan, Syria, and Lebanon, in addition to Palestine/Israel.  This will displease Palestinians who imagine themselves as descendants of the Canaanites or who see their national movement as originating with the efforts of Zahir al-‘Umar, an eighteenth-century Galilean tax farmer who sought to expand his power at the expense of the Ottoman central government, or some similarly implausible pre-twentieth-century moment.

As is the case with any book that offers a broad overview of a subject, there are questionable interpretations of particular incidents and minor factual errors.  My reading of the Sykes-Picot correspondence is that the British were rather more specific in their promises (which they broke) to the Hashemite family than Gelvin proposes (p. 81).  Gelvin mistakenly asserts that it was Israeli Defense Minister Pinhas Lavon who instigated the 1954 campaign of terrorist bombings in Cairo and Alexandria by Egyptian Jews recruited by Israeli Military Intelligence (p. 171).  All the available evidence indicates that Lavon was framed and that it was most likely protégés of Prime Minister David Ben-Gurion (temporarily in retirement at the time) who gave the order.  In discussing the rise of Palestinian Islamism, Gelvin makes no significant distinction between Hamas and Islamic Jihad.  As Gelvin notes, Hamas is rooted in a network of social services.  But Gelvin is unclear that Islamic Jihad is a purely military organization.

A significant lacuna is that Gelvin also gives relatively little space to the role of the United States in the Arab-Israeli conflict beyond its Cold War context.  How much space should be devoted to any given topic in a textbook is a matter of judgment.  My judgment on this matter is informed by the view that, since the late 1960s, the United States has been the single greatest obstacle to resolving both the Arab-Israeli and Palestinian-Israeli conflict and that it is crucial to convey this to a primarily American readership.  Space does not permit elaboration of this argument, but consider only the fact that the United States played no role in realizing, and at first actually opposed, the two most salient initiatives embodying the hope for Arab-Israeli peace: Egyptian President Anwar al-Sadat’s 1977 trip to Jerusalem and the Israeli-PLO negotiations leading to the 1993 Oslo Declaration of Principles.

Finally, while Gelvin’s account of Israel’s occupation of the West Bank and Gaza Strip since 1967 and of the rise and decline of the Oslo process is generally very good, he misses the point that the Labor Party was much more effective than the nominally more militantly nationalist Likud in establishing settlements in these territories and thereby undermining the possibility of peace.  The bogus argument that settlements were necessary for Israeli security; the basic contours of Israel’s occupation pattern, which are today a major obstacle to the establishment of a viable Palestinian state; the largest settlements in the West Bank; and the illegal separation barrier Israel is constructing, which will effectively annex at least 10 percent of the West Bank (much more if the proposed eastern section of the barrier is built), are all initiatives of the Labor Party.  And, of course it was Labor Prime Minister Ehud Barak and his “peace government” which replaced the “anti-Oslo” government of the Likud’s Benjamin Netanyahu who, as Gelvin correctly notes, gave Arafat a not particularly generous take-it-or-leave-it offer at the July 2000 Camp David summit — an offer that would have annexed most of the largest settlements to Israel.

The Labor Party, therefore, bears as much responsibility as any other party for the unraveling of the Oslo process (deeply flawed as it was from the outset).  The import of this observation is that, like much of the rest of the conventional wisdom about the Palestinian-Israeli conflict, the division of the Israeli political arena into the “moderates” of the Labor Party, Meretz, and Peace Now, and the “hardliners” of the Likud and Gush Emunim is a false dichotomy.  The dynamic of Israeli politics which deserves an explanation is how a fascistic figure like Avigdor Lieberman, a Russian Jewish immigrant and the head of the Yisrael Beiteinu (Israel is our home) Party, can become Deputy Prime Minister of a Jewish state in which the nominally socialist former head of Israel’s trade union federation and current head of the Labor Party, Amir Peretz, serves as Minister of Defense.

The government of Ehud Olmert, which has realized this achievement, was not yet installed at the time Gelvin wrote his book.  But if Gelvin had a deeper appreciation for the strength of irrationalism in Israeli political culture, primarily a result of the historical memory of the collective trauma induced by the mass murder of European Jewry and its calculated recapitulation as a central trope in all aspects of Israeli life, he might have helped readers to make sense of it.  Instead the book ends with a rather cautious assessment of the unilateralist strategy developed by Israeli Prime Minister Ariel Sharon in 2003-04.  In retrospect, this caution is unwarranted and too optimistic.  This excellent book deserves to see a second edition.  Unfortunately, the obligatory conclusion of that edition evaluating the prospects for Palestinian-Israeli peace, very likely, may be even grimmer than the conclusion of the present edition.

Joel Beinin is currently Director of Middle East Studies at the American University in Cairo while he is on temporary leave from his position as History Professor at Stanford University.  Beinin is also a past president of the Middle East Studies Association of North America.
This review was first published by H-Levant, H-Net Reviews, May 2007, at <h-net.org/reviews/showrev.cgi?path=292581185290112>.