The stimulus bill that President Obama pushed through Congress in the first month of his presidency was an important first step in counteracting the economic downturn.  However, as many analysts have noted, it is not likely to be sufficient to turn around the economy.  Economic and fiscal data only available after the passage of the bill provide strong support for this view.  There are two main reasons why the stimulus bill is even more inadequate than is generally recognized:

The first point is explained in detail in an earlier analysis.1  This paper explains the second point.

How Much of the Spending in the Stimulus Bill Is Actually Stimulative?

Approximately $70 billion of this appropriation was for a one-year patch of the Alternative Minimum Tax (AMT).  While this patch provides a stimulus compared to a situation in which the AMT is not patched, Congress has always moved to adjust the AMT in this manner.  There was probably no one in the country who had actually expected to pay the taxes that would have been required in the absence of an AMT fix, so this patch does not realistically provide any boost to the economy.

Furthermore, some of the spending in the bill continues beyond 2010.  For example, the money appropriated for modernizing the electrical grid and computerizing medical records will be spent out over the next decade.  These may be very useful expenditures, but money spent in 2015 will not boost the economy in 2009 or 2010.

If the $787 billion ARRA appropriation is adjusted by excluding the $70 billion AMT patch and the spending of $146 billion that takes place in years after the end of calendar year 2010, the two-year total stimulus in the package falls to $571 billion, approximately 1.9 percent of GDP.  This adjustment is shown in Figure 1.2 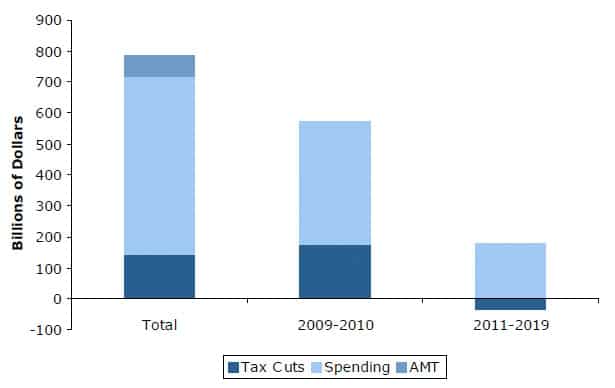 The Impact of State and Local Cutbacks

In addition to the stimulus from the federal government, the actions of state and local governments will also impact the economy.  The vast majority of these governments are facing budget deficits in 2009 and 2010 due to the economic downturn.  Virtually all of these governments are required by their constitutions or charters to balance their budgets.  Therefore, the projected deficits will force them to either cut spending and/or raise taxes.  These spending cuts and tax increases will partially offset the impact of the stimulus.  According to the Center for Budget and Policy Priorities, the shortfall for state governments in each of these years from 2009 through 2011 is projected to be more than $100 billion a year.3

In some cases, the money appropriated in the ARRA will be directly used to offset budget shortfalls, but this will not change the basic situation.  If state and local governments have shortfalls of $100 billion filled by money from the ARRA, and therefore do not change their tax and spending policy, then the money from the ARRA has prevented contractionary spending cuts and/or tax increases, but this $100 billion will have provided no net stimulus to the economy.  This is essentially what will happen to the $140 billion in ARRA funds directed towards state government shortfalls.  The money will help to reduce contractionary spending, but as state government revenues decrease and projected shortfalls increase, the $140 billion will be insufficient to fill the entire gap of these government shortfalls.

The total stimulus package for combined calendar years 2009 and 2010 is $571 billion, which was calculated in Figure 1.  Taking state and local budget shortfalls into account, the stimulus package for this period is further reduced.  The net government stimulus from the ARRA for 2009 and 2010 is shown in Figure 2.  Since the exact mix of spending cuts and tax increases that these state and local governments will pursue is not yet known, three possible scenarios are calculated in the figure below.  The first scenario assumes that state and local governments make up their shortfalls with equal amounts of spending cuts and tax increases.  Under the assumption that it is generally easier politically to cut spending than raise taxes, the second scenario assumes that 80 percent of the shortfall is met by spending cuts and just 20 percent is met by tax increases.  The last scenario shows all of the shortfall being made up by spending cuts. 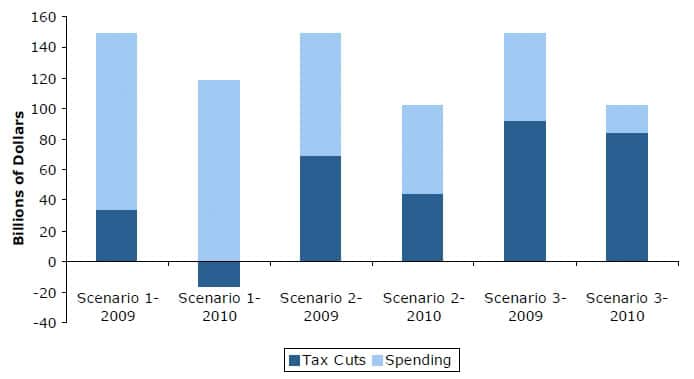 After netting out the spending cuts and tax increases at the state and local level, the government stimulus for 2009 and 2010 averages just $126 billion a year, or less than 0.9 percent of GDP.  Perhaps even more seriously, if state and local governments rely primarily on spending cuts rather than tax increases to make up their shortfalls, then they will even further offset the stimulus of the ARRA because on a dollar per dollar basis, tax cuts have considerably less impact than spending increases.4 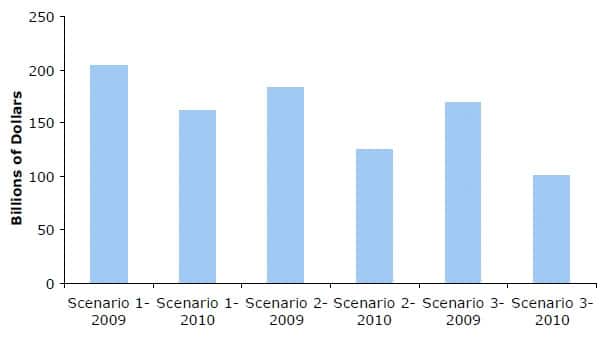 The effect of this stimulus is dwarfed by the shortfall in demand resulting from the collapse of the housing bubble.  The collapse of the housing bubble will push residential construction in 2009 and 2010 down by 1.5 percentage points of GDP compared with its 2007 level, the last pre-recession year.  Non-residential construction is also likely to fall by an amount at least equal to 1 percentage point of GDP compared with its 2007 level, as the sector adjusts to overbuilding.  This drop would return the non-residential construction sector to the same share it had in 2002 following the end of dot.com boom.

The multiplier on each of these sources of lost demand would be approximately 1.5, the same as for government spending.  Figure 4 shows the GDP loss from the collapse of the bubble together with the net boost provided by government actions in each of the three scenarios described above.  The effects for 2009 and 2010 are averaged for simplicity.

FIGURE 4: Impact of the Housing Crash and the Net Government Response 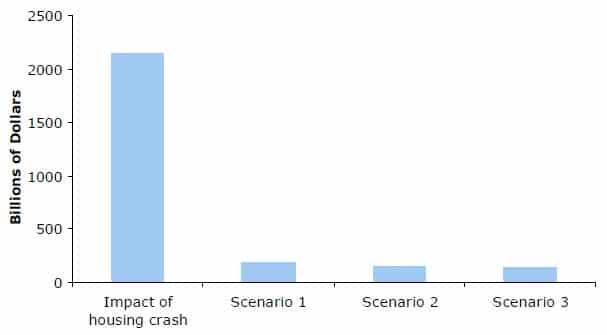 This paper has examined the net stimulus resulting from the ARRA coupled with the spending cutbacks and tax increases that can be assumed at the state and local level as a result of projected budget shortfalls.  The response of state and local governments will offset much of the $571 billion stimulus in ARRA for 2009 and 2010, leaving an average of $126 billion a year of government stimulus, less than 0.9 percent of GDP after spending cuts and tax increases are taken into account.  As a result of all of this, the net impact of government actions on the economy will be limited and will be a full magnitude of order smaller than the size of the $2.1 trillion demand shortfall created by the collapse of the housing bubble.  The falloff in demand could be as much as 15 times the net average annual stimulus implied by ARRA and could leave the U.S. with a net impact as low as 1.1 to 0.7 percent of GDP for 2009 and 2010 respectively.

These simple calculations should help to put some perspective on the likely impact of the ARRA.  They suggest that Congress may want to consider another round of stimulus to counteract the housing crash.

Figure 1 — The first bar in Figure 1 combines the total tax cuts, the one-year Alternative Minimum Tax, and spending in the ARRA as described in CBO, 2009.

Figure 3 — Figure 3 projects the net stimulatory effect of the changes in government spending at all levels in 2009 and 2010 under the assumption that spending has a multiplier of 1.5 and tax cuts have a multiplier 0.9.

1  Baker, Dean.   2009.   “The Housing Crash Recession and the Case for a Third Stimulus.”   Center for Economic and Policy Research.

3  These projections are taken from tables 2 and 3 of Lav, I. and E. McNichol, 2009.   “State Budget Troubles Worsen,” Washington, D.C.: Center for Budget and Policy Priorities.

4  The multipliers for tax cuts and spending increases are discussed in the Congressional Budget Office’s analysis of the economic impact of the ARRA.   See footnote 1.

5  Disposable income is equal to approximately 73 percent of GDP.   It is also important to adjust for the statistical discrepancy (the difference between the output side measure and the income side measure) in the GDP accounts.   This had turned negative in the years 2005-2007, most likely because capital gains in the stock market were showing up as income (it also had been negative in the late 90s).  More typically it is positive by an amount approximately equal to 1 percent of GDP.   It is generally believed that the output side measure is more accurate than the income side measure.  Since saving is measured as income minus consumption, if income is overstated (as would be implied by the negative statistical discrepancy) then saving would also be overstated.  If an output side measure of income is used, then saving was negative at the peak of the bubble and the decline in consumption needed to adjust to more normal levels will be even larger.