The U.S.-led international operation to distribute food, water, and medical supplies in Port-au-Prince after earthquake of January 12 has drawn a good deal of criticism.  In contrast, for the past 10 years the Ste. Claire parish in the Petite Place Cazeau (Ti Plas Kazo) neighborhood at the city’s northern edge has operated a very successful food program, started by the late Father Gérard Jean-Juste.  This week I asked Margaret Trost, founder and director of the California-based What If? Foundation, to describe by email her experiences with this program in the past and in the current crisis. — DLW

DLW: Could you tell us how the Ste. Claire program started?

MT: I visited Haiti for the first time in January 2000 on a  “mission of mutual exchange” with twelve other people.  During my visit I met Father Jean-Juste, who spoke to our group about life in Haiti, the fight for democracy, and the historical, political, and economic reasons why there was so much material poverty in Haiti.  When he was asked about hunger, he shared his vision for a food program that would feed the children in his community.  When I heard this, something lit up inside me, and I thought that maybe I could help him make his vision a reality.

I couldn’t get his vision out of my mind after I returned home to California a few days later.  I shared my experience in Haiti with family and friends.  Seed money began to arrive.  I sent it to Father Jean-Juste, and within three months the first meal was served

DLW: How does the program work?

MT: Members of the Ste. Claire community prepare the meal, which usually consists of rice, beans, vegetables, and lots of herbs and spices.  Food was always purchased at the farmers’ market, helping support the local economy.  Father Jean-Juste used to call the program “the great sharing.”

The meal started out just one day a week for 500 children, since that’s all the money I could raise.  But then after the coup d’état in 2004, Father Jean-Juste and I took a leap of faith and expanded it to two days.  Then it went to three, then four, and in 2006 we expanded to five days a week.  The earthquake struck just as the cooks were wrapping up the Tuesday meal, having served about 1,200 children and 300 adults.

DLW: Why do you think the Ste. Claire program has been so successful?

MT: The key is our partnership.  The programs are run beautifully by members of the Ste. Claire community, and I remain committed to doing all I can to fundraise on their behalf through the What If? Foundation.  We’re a good team.  Father Jean-Juste passed away last May, and I miss him beyond measure, but he chose incredible leaders to run the programs.  Their integrity, courage, and commitment is what makes the programs continue to be so successful and is the reason why we’ve been able to provide such immediate relief after the earthquake.

DLW: Do you know of other programs like this in Port-au-Prince?

MT: There are many examples of strong partnerships with Haitian communities.  That the programs are grassroots, community-led — that’s what’s most important.

DLW: How has the earthquake impacted the program and the Ste. Claire community? 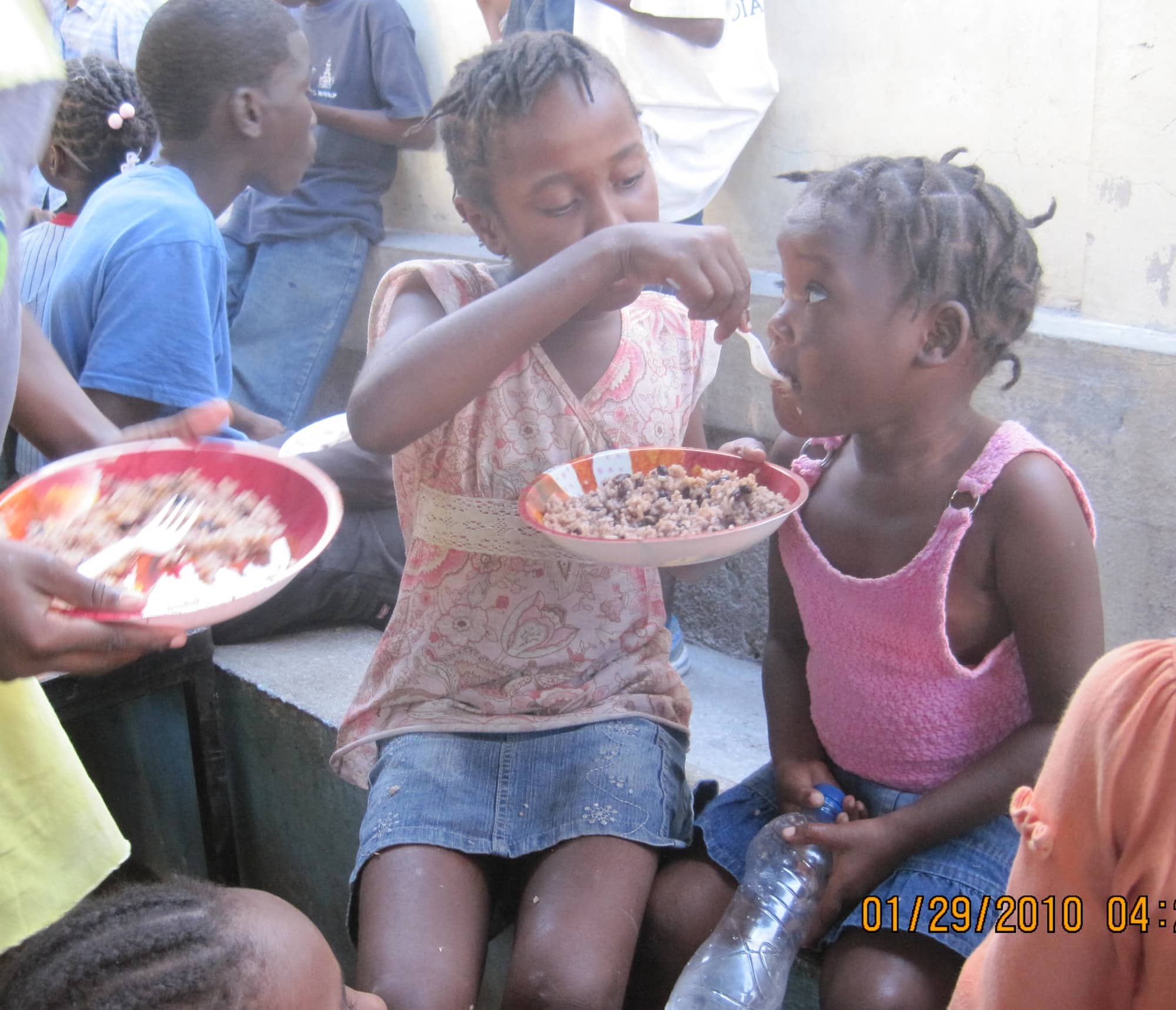 MT: We were so fortunate that all of the program staff survived the earthquake and the food program kitchen building did not collapse.  As soon as we were able to get the first truck of food and water in through the Dominican Republic on Sunday, January 17, the program staff began distributing relief to thousands of people.  They started with passing out canned food and water, but as soon as the aftershocks stopped, the cooks reentered the kitchens.  On Monday, January 25, the food program was back in full swing, serving rice and beans to as many as 4,000 people a day.

Children are served first and then adults.  Canned food and water continues to be passed out to thousands more when it’s available.

DLW: How have you been able to get food distributed?

MT: The key initially was to figure out a way to get the relief to the parish.  Teaming up with another nonprofit, we’ve been able to do this effectively by trucking in supplies from the Dominican Republic.  Lavarice Gaudin is our program coordinator and is in charge of the relief efforts.  He’s organized a team at the rectory that distributes food and water not only to the tent community of 1,000 people that’s formed across the street but also to thousands more who live in the area.

Right now, Lavarice is working on ways to bring food and water out to families who are not able to walk to the rectory each day for help.  He’s also given rice and cooking oil to communities in Cité Soleil and elsewhere.  The need is everywhere, so we’re trying to share what we have with as many people and communities as possible.

DLW: What difficulties have you had?

MT: There have been some challenges with distributing to large crowds, but they’ve figured out a way.  There’s been no violence.  Lavarice has told me that distribution is complicated, but when you treat people with respect and are smart about how you go about it, and communicate through a megaphone, it is certainly doable in large numbers.  The key he feels is that Haitian communities need to be involved in the distribution.

DLW: The media here have talked a lot about the need for “security” in aid distribution. . . .

MT: When I read media reports emphasizing lawlessness, riots, looting, and other scenes that depict Haitians as violent, it infuriates me.  I know this is grossly exaggerated.  Although distribution is intense and challenging, there has been no violence at the St. Claire’s rectory.  Phone calls and reports I receive daily from people on the ground working in the relief effort emphasize the extraordinary strength, cooperation, faith, patience, and community spirit of the Haitian people.  This is what needs to be emphasized in the headlines.

DLW: What help have you gotten from the United Nations and other international groups?

MT: We received a tent from the UN, and one visit from Caritas with relief boxes, but that’s it so far.  I continue to work to get the attention of USAID  [the U.S. Agency for International Development] since we’re only four miles from the Port-au-Prince airport.  No luck yet, but I keep trying.  If we had support from them or other large international relief agencies, there’s so much more the team at Ste. Claire’s could do to help people not only in the immediate area but also in other communities.

DLW: How can people help from here?

MT: What we need right now are dollars — so we can continue to pay for food and water.   Then down the road we’ll need more dollars for rebuilding.  I’m committed for life to this partnership, so I’ll be working hard to support their vision for the future.  I keep reminding myself and others of the wise Haitian saying, “Piti piti na rive” — “little by little we will arrive.”  Every contribution, every act of compassion — it all matters.  It all adds up.

To support the Ste. Claire food program, go to <http://whatiffoundation.org/donate/>.  You can learn more about the program from Trost’s memoir, On That Day, Everybody Ate: One Woman’s Story of Hope and Possibility in Haiti.