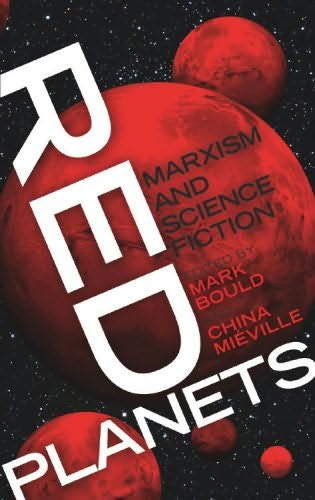 Red Planets: Marxism and Science Fiction is a fascinating book of literary/cinematic criticism and political theory.  It was not, however, the book that I thought it would be.  Red Planets is a collection of essays that offers an intricate analysis of the development of science fiction as a genre.  This collection also unpacks many of the key themes in science fiction and relates them to broader struggles on the ideological plane.  As such, Red Planets must be read less as an analysis of the hidden (and not so hidden) messages contained in much science fiction literature, cinema, and television, and more as an examination of how various issues of theory are struggled out within the realm of what we have come to know as science fiction.

Once I came to understand that this was a very different book than I anticipated, I was able to read it more comfortably, though through many challenges.  This is a book that works as a course book in a college and university setting, particularly where students are attempting to understand the history of the development of the literary and cinematic genre of science fiction.  This is not to say that the essays are written absent a clear point of view.  To the contrary, the essays are strongly written, in many cases attempting (generally successfully) to link their analysis of various aspects of science fiction to struggles that were taking place in other realms of theory.  One of the most thought-provoking of the pieces was Darren Jorgensen’s “Towards a Revolutionary Science Fiction: Althusser’s Critique of Historicity.”  I think that the last thing that I expected to see in this collection was a use of Althusserian Marxism to examine and critique a particular school of thought in science fiction.  Yet the essay worked, as did Rob Latham’s “The Urban Question in New Wave SF.”  This latter piece particularly struck me because of the emerging struggles in much of the world — including here in the USA — regarding urban terrain: specifically, the question of class struggle at the level of geography, a theme advanced by David Harvey, as well as — at the activist level — by the Right to the City Alliance.

Yet, as noted in the beginning of this review, this was not the book that I was expecting to read, and herein lies, perhaps, my own weakness or a weakness of the book.  Science fiction has been a critical element in the imagination of much of the Left.  However, among many left-wing activists and theorists, it is something that is often approached sheepishly, with a certain degree of embarrassment.  It is almost as if one’s interest in science fiction is an engagement in a childhood game, such as “freeze tag.”  Oddly, when leftists actually begin to engage in a dialogue about science fiction, myriad themes generally emerge that demonstrate that it is anything but childish.  For many people, science fiction and fantasy are nevertheless signs of immaturity rather than an engagement with ideological and political issues in another dimension.

What I hoped to see in this volume was a move away from the more general toward a focus on more concrete aspects of science fiction.  Take, for instance, the evolution of “cyberpunk,” a tendency in science fiction associated with William Gibson, and also to a great extent with the film Blade Runner.  I would have found it interesting to understand what happened to this tendency, one that was also understood as “near future” and semi-dystopian science fiction.  Cyberpunk is very different from the various ‘end-of-the-world’ literature and films that periodically proliferate (as we are currently seeing), instead offering the reader (or viewer) a possible — and generally negative — result from highly technologically developed neo-liberal globalization.  While several of the authors referenced cyberpunk generally, and William Gibson in particular, I found myself wanting a more in-depth analysis of what happened to this trend.  One can note, even in the evolution of Gibson’s writings, a turn away from what I believe was some of his best and more classic cyberpunk, toward something that one could perhaps describe as high-tech mysteries.

Red Planets affirms that science fiction is highly ideological and, in fact, is a field in which ideological struggles regularly unfold.  Socialism and anarchism, for instance, contend with feudalist and monarchist trends, and not simply in the realm of fantasy.  Periodically, a science fiction phenomenon unfolds — e.g., Avatar — that not only shakes the world in terms of box office sales and special effects, but also at the level of basic plot and theme.  The right-wing’s response to Avatar, for instance, shows how seriously they consider the realm of science fiction in that they are extremely critical of the film’s anti-corporate, anti-colonial, and pro-green orientation (despite certain plot failings that I do not wish to address at this moment) and its potential impact in the middle of the current economic/environmental/political crisis.

Finally, what about Star Trek?  I raise this question as a fanatical Trekker, but also as a Marxist.  One of the most important developments in film and television science fiction over the last forty years received very little attention in Red Planets.  Yet, the evolution of the plots in Star Trek, and the relationship of the Star Trek phenomenon to the development of US imperialism, is certainly worthy of attention.

The difficulty with my critique, and I must acknowledge this, is that I am probably — and very unfairly — proposing another book.  I believe that there needs to be something that is much more oriented toward left-wing activists and theorists who are drawn to science fiction, who use it in metaphors, and who seek in it a sense of hope that the future can be far better than is the present.  While the comprehensive analysis offered in Red Planets demonstrates that science fiction is not a child’s play but instead represents an important cinematic and literary locale, the book — despite the fact that I absolutely recommend it — does not seem to seek to touch those who were moved when they heard the words of Captain Jean-Luc Picard, in Star Trek: First Contact:  “. . . You see, money does not exist in the twenty-fourth century. . . .  The acquisition of wealth is no longer the driving force in our lives.  We work to better ourselves . . . and the rest of humanity.”

Bill Fletcher, Jr. is the Executive Editor of BlackCommentator.com, a Senior Scholar with the Institute for Policy Studies, the immediate past president of TransAfrica Forum, and the co-author of Solidarity Divided (University of California Press, 2008).  He can be reached at <papaq54@hotmail.com>.