The seasonally adjusted Case-Shiller 20-city index again showed a modest 0.3 percent rise in December.  This index has risen at a 3.2 percent annual rate over the last quarter, although it is down by 3.1 percent over the last year.  There appears to be a growing divergence in price trends in recent data with the three California cities in the index (San Diego, San Francisco, and Los Angeles) and Phoenix all seeing price increases of more than 1.0 percent in December.  In contrast, prices in Chicago fell by 0.6 percent and in New York by 0.5 percent.

Over the last three months, prices in Phoenix rose at a 17.3 percent annual rate and in San Francisco at a 16.3 percent rate.  The annual rate of increase in Los Angeles over this period was 14.5 percent and 14.0 percent in San Diego.

Prices fell at a 9.2 percent annual rate in Chicago over this three-month period and by 6.8 percent in New York.  Tampa also saw a sharp price decline with prices falling at a 7.6 percent rate over the last three months. 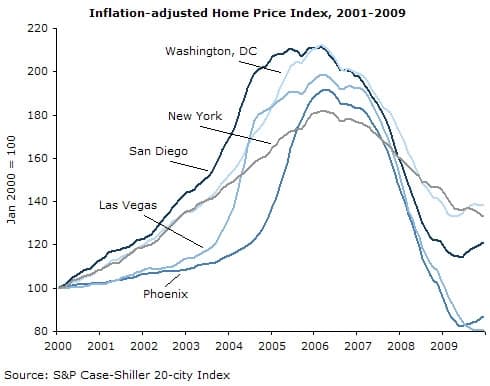 Going forward, there continues to be substantial grounds for questioning whether this price recovery will be sustained.  The Federal Reserve Board appears likely to go through with plans to end its purchase program for mortgage-backed securities at the end of March.  This will almost certainly cause the 30-year mortgage rate to rise to at least 5.5 percent by the end of the year.

More importantly, the renewal of the expanded first-time buyers tax credit is scheduled to expire at the end of April.  Given the surge in sales in September and October, there can be little doubt that the initial credit boosted demand, which is also reflected in the sharper price increases in the bottom tier of the housing market in most cities.  (The credit is larger relative to house prices in the bottom tier and these houses are also more likely to be bought by first-time buyers, so it would be expected that the largest impact shows up in this segment of the market.)  The paring back of loans guaranteed by the Federal Housing Authority will also be a factor reducing demand in 2010, especially at the bottom portion of the market.

Interestingly, demand for new mortgage applications has continued to be extremely low following the expiration of the original tax credit.  It has been consistently running below the very depressed 2009 levels through January and into February.  This is consistent with many buyers having moved their purchases forward to take advantage of the initial tax credit that was expected to expire at the end of November.  The implication would be that demand will be especially weak in 2010 and therefore that prices are likely to soon resume their decline.

Dean Baker is the co-director of the Center for Economic and Policy Research (CEPR).  He is the author of False Profits: Recovering from the Bubble Economy.  He also has a blog Beat the Press, where he discusses the media’s coverage of economic issues.  This article was first published by CEPR on 24 February 2010 under a Creative Commons license.