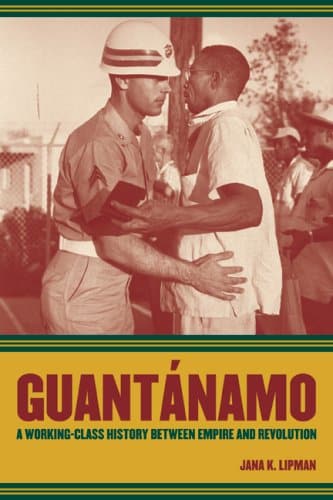 A couple of years ago I had the opportunity to serve on a Society for Historians of American Foreign Relations panel with Jana K. Lipman.  She stole the show with a fascinating history of Cuban workers laboring on the U.S. military base at Guantánamo (GTMO).  This book, Guantánamo, is the impressive culmination of that avenue of research.  Tracing the history of these Cuban base workers allows Lipman to place GTMO firmly in its Cuban context.  With impressive research in Cuban archival records and oral interviews, this work is an important contribution to U.S.-Cuban relations.

These workers lived primarily in the Cuban town of Guantánamo.  In Lipman’s work, and therefore in this review, the name Guantánamo refers only to the town, while the base is referred to by its well-known acronym.  Although Lipman sketches the history of GTMO from the Spanish-American War through the 1930s, her story begins in earnest with the beginning of World War II.  At this point, GTMO went from being a fairly unimportant outpost with a few hundred soldiers and sailors, to a massive modern base with thousands of military personnel and up to thirteen thousand employees working for the military and private contractors.  The logical source to meet the resulting labor needs was the city of Guantánamo.

During this first stage, U.S. officials were faced with two primary challenges: dealing with efforts by the Cuban workforce to unionize and demand better pay and working conditions, and managing the often fraught relationship between U.S. service personnel and the local community.  In dealing with the challenge of unionization, the U.S. military did have to make a series of fairly minor concessions, but overall workers were consistently outmaneuvered by management.  The military physically controlled the workers to an almost shocking extent.  Cubans would undertake a journey of up to two hours each way to arrive at work.  Once there, they would have to go through security at tightly controlled checkpoints, with their belongings and persons subject to increasing levels of scrutiny.  By the 1960s, workers were forced to disrobe entirely on entering or exiting the base.  This meant that Cuban workers were largely isolated from even the meager protections of their home government when they were at work.  They existed in a sort of legal limbo in which the United States alternately denied that Cuban law protected workers, or, when it benefited them, denied that U.S. law applied.  Cubans seeking to improve their working environment on the base were also faced with a significant labor surplus.  The military could dismiss employees at will, finding no trouble locating eager replacements.  Increasingly, the U.S. military also turned to hiring West Indian workers as an alternative to dealing with the demands of their Cuban workforce.  Finally, the U.S. military found it more and more useful to get out of the business of directly dealing with Cuban workers, instead contracting with U.S. companies, and thus unloading the burden of labor negotiation to those firms.

The other problem faced by U.S. officials was the relationship between their personnel and the community of Guantánamo during the frequent leave visits soldiers and sailors took to the city.  Guantánamo elites, on the one hand, relied on the U.S. dollars that these leave visits generated.  On the other hand, military personnel also created social problems by generating demand for gambling and prostitution, and by engaging in acts of rape, assault, and destruction of property.  U.S. officials sporadically worked to solve these problems in collaboration with local elites, but ultimately the cycle continued until the leave visits ended as a result of the 1959 revolution.

Despite these issues, this labor arrangement worked and was fairly stable until the Cuban Revolution.  Fidel Castro’s successful revolution profoundly changed the relationship of GTMO to Guantánamo.  The most striking result was to isolate the base from the surrounding countryside to the point that the base’s geographical location became nearly irrelevant to those who served there.  As U.S. and Cuban officials bickered over jurisdiction, leave visits from U.S. military personnel came to an abrupt halt.  Cubans working on the base also came to be viewed with increasing suspicion by both the U.S. military and the Cuban government.  In neither zone was their loyalty taken for granted.  By 1964, Lyndon Johnson seized on a relatively minor pretext, the temporary shutting off of the water supply by the Cuban government, to summarily dismiss the majority of the Cuban workforce.  Although a few hundred intrepid souls deemed either essential or nonthreatening by the United States continued to make the commute for decades, the vast majority of Cuban workers were replaced by West Indian labor.

Although the Cold War looms large in Guantánamo, one of the striking features of Lipman’s work is to revise the typical chronology of U.S.-Cuban relations.  For workers, the most remembered dates included labor disputes, the death of a worker under suspicious circumstances, and eventually the dismissal of large numbers of workers in 1964.  Such events as the Cuban Missile Crisis and the Bay of Pigs captured the attention of workers and GTMO personnel, but they were largely observers in these dramatic events.  Lipman privileges a chronology defined by local interests, and by the particular struggles and challenges in the lives of the workers she studies.

If much of Lipman’s work represents an effort to place GTMO in its Cuban context, she uses the epilogue to suggest that recent U.S. policies and uses of GTMO have been an attempt to do just the opposite.  That is to say, in the war on terror, U.S. officials have preferred to define GTMO as neither Cuban nor American, but as a sort of international exclusionary zone in which neither nation’s laws apply.  She argues that when “military bases attempt to operate in hermeneutically sealed compounds and with no social ties to nearby communities, GTMO is created — GTMO circa 2002, complete with orange jumpsuits and cages” (p. 227).  The epilogue is not without insight, although its overtly political tone (“I add my voice to the chorus of those who believe the U.S. government should ‘close Guantánamo'”) represents a somewhat jarring break from the rest of the book (p. 218).

Lipman’s discussion of transnational history is a good place to begin an analysis of Guantánamo.  In many ways, this work represents the best of what transnational history is supposed to be about.  These Cuban workers lived in one nation but worked in another, while U.S. military personnel lived and worked in one country, but spent their leisure time in another.  Lipman shows how Cuban and American culture and political ideas mixed and interacted in both Guantánamo and GTMO.

However, Lipman is reluctant to embrace the label “transnational.”  She argues that much of transnational history goes too far in decentering the role of the state.  The workers she studies “had to navigate and travel between these two poles; there was nothing transcendent about it” (p. 5).  In this, Lipman is reminiscent of Theda Skocpol’s argument for “bringing the state back in” to social scientific methodology.1  Perhaps transnational history could benefit from a similar corrective.  Certainly in the context of GTMO’s labor history, the Cuban and U.S. states are ever-present.

Lipman’s Guantánamo is an important contribution to a recent literature probing the role of U.S. labor unions during the cold war.  U.S. labor leaders, such as the ubiquitous Serafino Romualdi, worked to shape union organization in Latin America along ideologically tolerable lines, blunting any radical tendencies.  A similar theme appears in Stephen Rabe‘s recent U.S. Intervention in British Guiana: A Cold War Story (2009).  A thriving cottage industry has developed in the historiography examining the international role of the AFL-CIO and such institutions as the American Institute for Free Labor Development.  In Cuba, the AFL-CIO aided in the organization of a base union, but just as quickly withdrew that support when the union went beyond a narrow definition of working conditions to deal with larger issues facing workers, such as whether the U.S. or the Cuban legal system protected them while on the base.

Lipman’s greatest strength is the quality of her research in Cuban sources.  She conducted research in numerous Cuban archives, collections, and published works and collected “more than a dozen” oral histories from former base workers (p. 14).  Lipman’s use of these oral histories, collected in 2004-2005 — a half century after most of the events — faces some clear challenges.  Memories fade, and the Cuban Revolution and the subsequent tension between the United States and Cuba has no doubt altered workers’ memories of distant events.  Lipman’s U.S. nationality may have exacerbated such distortions as these histories were collected.  Further, although finding even a dozen interviewees this long after the fact is impressive, the number of interviews is ultimately fairly small, and thus any conclusions drawn from them must be tentative.  Finally, the reader is given very little information about the interviews.  In an understandable effort to protect the privacy of her sources, Lipman does not provide real names, dates of interviews, or even a complete count.

Conscious of these challenges, it is to Lipman’s great credit that she generally manages to use these problematic sources in creative and appropriate ways.  The oral histories in Guantánamo typically serve to introduce a topic, raise questions, or emphasize a point supported by archival evidence.  They are deployed judiciously and add a significant sense of presence and immediacy to Guantánamo.

In any case, one almost has to search for such minor quibbles in this work.  Lipman’s account is impressive, original, and well researched.  Its subject matter should interest foreign relations scholars, Latin America area specialists, and labor historians.  The size is manageable and the writing engaging, making this an appropriate text for undergraduate classrooms.