Barely three months have passed since the controversial bill that authorizes the government to target its massive subsidy program became law, and it is already stalling.  The government has asked the parliament to lift the $20 billion ceiling on spending from the revenues that it hopes to raise from selling energy at higher prices and lowering the subsidy for a few other items.  In the meantime, the stalling has allowed the opponents of the targeting bill to revive their calls for scrapping the bill and renew their warnings that the nation will pay a heavy price for removing these subsides (see, for example, here and here, both in Persian).  Most likely this will not be the last setback the bill will suffer in its precarious journey toward implementation.  But at least the journey to rationalize Iran’s energy prices has started.  The warnings of dire consequences from the targeting bill are usually about soaring inflation and rising poverty.  Inflation is forecast to rise to intolerable levels, 30-50 percent by some accounts, and the poor are expected to lose big in the bargain.   The warning about inflation is well taken but the claim of rising poverty is very debatable.

There is no denying that raising energy prices will lead to price increases in general, despite mild denials by the bill’s supporters.  How much inflation will increase depends on how gradually subsides are removed and whether or not Iran’s Central Bank decides to accommodate or fight the general price increases.  Fighting them too vehemently by tightening credit would impose a heavy cost on the already weak economy, plunging it into deeper recession, so my hope is for some accommodation (read more inflation).

The claim that the reform would hurt the poor is a more serious criticism since reducing inequality is the main stated goal of the reform.  Unlike the claim about inflation, this one can be checked by doing some easy number crunching, which is what I will do.  The short lesson from the number crunching is that energy subsidies (especially for gasoline) are regressive in the sense that the poor receive a much lower share of them than the rich, so the only way the poor would lose from removing them would be if the government botched its repayment scheme, something which I am more inclined to believe now than I was the last time I wrote a post on this subject (more about this below).

For the long answer, which I hope is worth the pain, let us look at how Iranian families spend their income on a few key subsidized items.  The table below shows the amount of annual expenditures and direct subsidies that individuals received in 2007 (1386) calculated for the ten deciles of per capita net expenditures.  (There are indirect subsidies that accrue from consuming energy intensive goods, which I ignore here.)  I will further simplify my calculations by assuming that the market price or full cost of each item is 5 times its actual (2007) subsidized price.  So the amount of subsidy per unit equals 4 times the price.  For example, for gasoline this formula assumes a cost-based pump price of about 6000 rials per liter (five time my estimate of the average price of 1200 rials per liter in 2007 and close to its world price).  These assumptions are ballpark numbers but do not affect the estimates of the distribution of the subsidy for individual items.  My estimates probably understate the true amount of subsidy because my numbers add up to only 166 trillion rials, which is about one-third of what I estimate the total subsidy for all goods (and all consumers — government and corporate) to be (about $50 billion).  I will only consider the most important items affected by the targeting law.

Here is what I find for (a) the amount of subsidy per person and (b) how the subsidy for each item is distributed by decile of expenditures.

Source: Author’s calculations from the data files of the 2007 Household Expenditures and Income Survey, Statistical Center of Iran.

According to this table, in 2007 the average person in the lowest (poorest) decile spent 3.2 million rials (roughly $1000 in PPP dollars) per year (in all these conversions I use the World Bank PPP rate for 2007 of 3355 rials per USD), compared to 58.5 million rials (roughly $18,300) by the average person in the highest decile.  Each poor person received a bread subsidy of about $160 per year, which is about the same as a person in any other decile.  However, in the case of gasoline $540 per year went to the persons in highest decile, compared to $44 in the lowest decile.  Nearly half the gasoline subsidy went to the richest 20 percent.  Electricity and natural gas were also unequally distributed, with more than one third going to the top one-fifth and less than 10 percent to the bottom fifth.

The average poor person (bottom decile) received a total of 1.2 million rials in subsidy per year ($360), compared to 4.7 million rials ($1,410) per person in the richest decile.  Obviously, if all these subsidies are removed and there is no compensation, while the rich will lose more in absolute terms, the poor would suffer more.  This is because the loss in direct subsidies for the person in top decile is only 8 percent of his or her expenditures, whereas for someone in the lowest decile it is 37 percent.  Even though in absolute terms the rich take in more of the subsidy than the poor, in the conventional sense the subsidy program is not regressive.  This is because as a proportion of expenditures the subsidy is much larger for the poor than the rich (see graph below).  So, viewed as a negative income tax, the subsidy program is actually progressive. 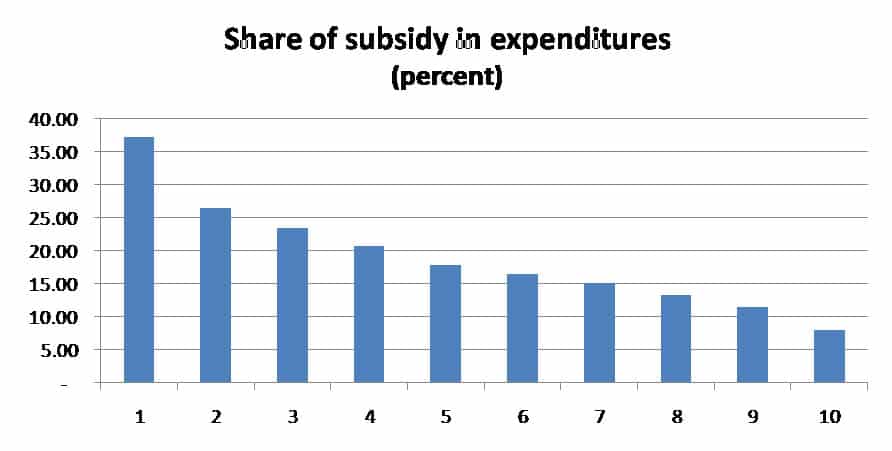 There is general agreement that the government should not subsidize the rich, especially when it involves waste and environmental damage.  If, as the law envisages, half the total subsidy were distributed equally among, say, the lower 50% of the population, each of them would receive about 2.4 million rials or (PPP) $710 per year, which is about twice what they are getting now in the form of subsidies for the four items I have listed here.

So, ignoring the indirect effects, the subsidy reform comes down to the following bargain for the poor: give up $360 in certain benefits for the promise of $710 in the future.  In these uncertain times they might well prefer the bird-in-hand (in Persian we say seeliye naghd beh az halvayeh nesyeh — literally, a slap in the face now beats sweet halva on promise).  Should they take or reject this bargain?

The answer depends on one’s assessment of the government’s sincerity and competence in administering the cash-back program, on which there is wide disagreement.  Doubt whether the government’s team is up to the task is increasing.  The government spent a lot of money in administering a national income and wealth census which is the basis for identifying the target families.  The recent backtracking on its first version of the targeting system has worsened national anxiety over the accuracy and the fairness of any classification based on government surveys.  Initially, the population was divided into three income and wealth “branches” (khousheh in Persian), but this was soon abandoned as it became the butt of jokes in the country and stories circulated about who knew so-and-so rich family who were placed in branch one (the needy) and some poor folk in branch three.  After spending millions of dollars in designing this system of classification, and trading some 34 million SMS messages with the citizens who wanted to know which branch they were in, not to mention putting the reputation of the Statistical Center of Iran as a neutral collector of household survey information at great risk, a smiling President Ahmadinejad on national television asked the Iranian people to forget the “branches.”

Djavad Salehi-Isfahani is a Dubai Initiative research fellow at the Belfer Center for Science and International Affairs at Harvard University.  This article was first published in his blog Tyranny of Numbers on 15 March 2010; it is reproduced here for non-profit educational purposes.  See, also, Djavad Salehi-Isfahani, “Iran: Reform of Energy Subsidies” and “Off Target in Subsidy Reform.”