Iran’s Central Bank announced that the annual inflation rate has dropped below 10%, so it may seem like an odd time to talk about how rising inflation might affect Iran’s poor.  But if the government implements the subsidy reform law, as it has promised to do in the second half of this year (Iranian year 1389), inflation will most likely rise.  The strongest objection to this reform is not that it will increase the rate of inflation, but that higher inflation will hurt the poor.  If that were to happen, it would be the height of irony, for the entire scheme was proposed to promote social justice, not to take money away from the poor.  From the point of view of social justice the best part of the scheme as it was originally proposed was that the rich would pay full price for energy and other basic goods while the poor received their subsidy as income.  With that scheme, the poor would have gained, at least in relative if not in absolute terms.  But the progressive cash-back scheme is no longer talked about, so the distributional effect of the subsidy reform very much depends on how inflation affects the poor versus the rich.  So, the crucial question is this: will the inflation that follows the removal of subsidies hurt the poor more than the rich?  I have not seen serious evidence that can answer this question (perhaps there is, but I have not seen any).  To satisfy my own curiosity I review here the historical evidence on inflation and equality, which seems to suggest that in Iran inflation may not be the cruelest tax of all, as the saying goes.

Figuring out whether the inflation that will follow the removal of subsidies is anti-poor is a complicated task.  Raising energy prices alone will affect nearly all domestically produced goods and services and, depending on the energy intensity of the basket of consumption of the poor, it may hurt them more or less than the rich.  It is technically feasible to model how prices will react to the removal of subsidies and how they affect the purchasing power of consumers in different income groups, which I am not prepared to undertake, so for the time being let us look at a simple correlation of inflation and the relative incomes of the poor versus the rich.

This graph depicts the rate of inflation and the ratio of mean per capita expenditures of the second poorest to the second richest decile (the same as the ratio of the shares of decile 2 to 9).  I did not choose the first and the tenth deciles because survey data are less reliable at the two extremes. 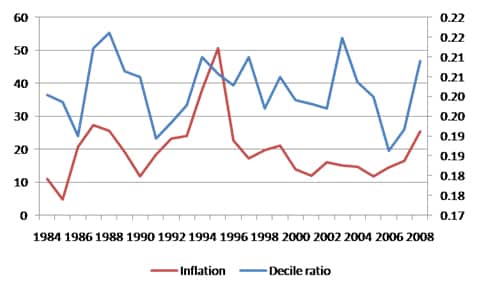 The proportion of mean per capita expenditures of the 2nd to the 9th decile.
Source: Author’s calculations from the Household Expenditures and Income Surveys 1984-2008, Statistical Center of Iran, and Central Bank of the Islamic Republic of Iran.

The co-movement of the two variables is quite noticeable in this graph (the simple correlation coefficient is 0.32), but of special interest is the behavior of the decile ratio in two inflationary periods.  The first is during 1991-1993, the period of taadil or structural adjustment, when the Rafsanjani government reduced war-time subsidies, let prices adjust to market demand and supply, and inflation soared.  Other things happened at the same time, like a sudden rise in oil income, so this is not exactly hypothesis testing, but the decile ratio moved in favor of the second lowest decile relative to the second highest.  As inflation eased, this ratio fell slightly.  The second inflationary episode of interest is the inflation of the last few years, which was more decidedly oil-boom induced.  Again, other things happened that could have affected the distribution of income, but it is worth noting that this inflation, too, was also coincident with a rising share of the poor decile relative to the rich.

These observations do not mean that inflation does not seriously hurt some of the poor, or that the poor suffer less than the rich.  Anyone with fixed income will lose when prices rise, and those at the bottom of the income distribution who lose will feel much greater pain than the losers from the top.  Furthermore, at low income levels all expenditures are on necessities and, unlike the rich, the poor do not have luxuries to cut or assets to fall back on.  For these reasons, the poor rightly complain more loudly about inflation.

Using polling data from 38 countries, Easterly and Fisher (Journal of Money, Credit and Banking 2001) found that the poor and the less educated express more concern for inflation than the rich and the more educated.  Interestingly, they also find that in the countries they study (Iran not included) the poor are not imagining things — they actually lose from inflation.

Is this also the case in Iran?  Without further research it is hard to answer this question.  Every country is different in terms of the sources of income of its poor, the degree to which the incomes of the poor are indexed, and the level of social assistance that protects their consumption in bad times.  I have used expenditures here; it would interesting to repeat this exercise with income.  It is important to bear in mind that the poor are also sellers, for example of labor and farm products, and not just buyer, so they could potentially gain from rising prices.  In Iran unskilled wages seem to keep up with inflation (more on this at a later time).  In defense of posting this preliminary evidence I should say that my purpose is not to convince but to transform into question what appears in the Iranian public discourse to be a forgone conclusion, that inflation hurts the poor.

The more important influence on the lot of the poor in the case of Iran’s subsidy reform program is how the cash-back program will be implemented.  We know that it lost much of its progressive thrust when the government abandoned its original progressive redistribution scheme in favor of a flat rebate.  The government started with a costly effort to assess household wealth and income in order to distribute the proceeds from the reduction of subsidies to the poor, but the botched plan to divide the country into three groups (“khousheh“) seems to have killed that idea, at least for the time being.  The plan now seems to be for the government to disburse the money equally across poor and rich households, with a moral plea to the rich to voluntarily take their name out of the pool of recipients.  I do not know how many Iranians have volunteered so far, besides the cabinet members I saw doing so on national television.  It would be a pity if some progressive scheme does not replace the stillborn “khousheh” plan.

Djavad Salehi-Isfahani is a Dubai Initiative research fellow at the Belfer Center for Science and International Affairs at Harvard University.  This article was first published in his blog Tyranny of Numbers on 9 June 2010; it is reproduced here for non-profit educational purposes.  See, also, other articles by Djavad Salehi-Isfahani: “Iran:
Poverty and Inequality since the Revolution”; “Iran: Reform of Energy Subsidies”; “Will Iran’s Poor Lose from Subsidy Reform?”; “Estimating the Value of Iran’s Subsidies”; “Greater Equity through Redistribution: What Can the Targeting of Subsidies Do in Iran?”