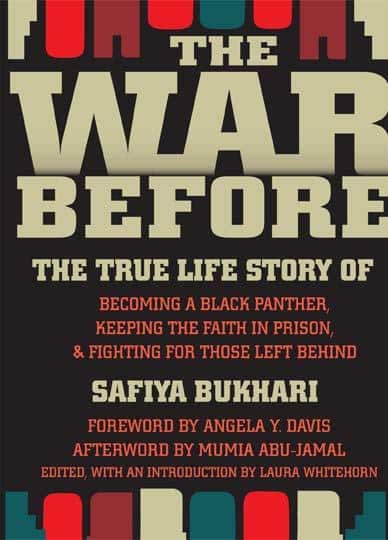 In 1968, Safiya Bukhari witnessed an NYPD officer harassing a Black Panther for selling the organization’s newspaper on a Harlem street corner.  The young pre-med student felt compelled to intervene in defense of the Panther’s First Amendment right; she ended up handcuffed and thrown into the back of a police car.  The War Before traces Bukhari’s lifelong commitment as an advocate for the rights of the oppressed.  Following her journey from middle-class student to Black Panther to political prisoner, these writings provide an intimate view of a woman wrestling with the issues of her time — the troubled legacy of the Panthers, misogyny in the movement, her decision to convert to Islam, the incarceration of outspoken radicals, and the families left behind.  Her account unfolds with immediacy and passion, showing how the struggles of social justice movements have paved the way for the progress of today. — The Feminist Press

Hi, my name is Laura Whitehorn, and I edited a book called The War Before, which is writings and speeches by a woman named Safiya Bukhari.  Safiya Bukhari’s daughter, Wonda Jones, asked me, after her mother died, to edit and put together some papers that Safiya had left behind when she died.  We began with a small stack of papers, some of the things that Safiya had written while she was in prison and soon afterward, many of them talking about the experience of the Black Panther Party while she was in the Black Panther Party, what happened to it, problems inside the party, the contradictions with the government.  Many of them were about political prisoners.  Amy Scholder of the Feminist Press said to us: You have a piece of book here.  So, we set out to find the other pieces, and we found, probably, a hundred other things — speeches, writings, interviews — and we put some of those together, a selection, and we produced the book called The War Before.

It’s not a memoir.  It’s much more than that.  It’s Safiya grappling with: What happened to the Panthers?  Why was the government successful in causing a split in the Black Panther Party, in causing situations where people ended up killing each other, where people ended up being assassinated by the government and were not able to prove it for so many years that no one knew what happened?  So, she is mining her own experience and history and coming up with some . . . not complete answers but pieces of the answer.

Safiya didn’t look to a leader to tell her what to do.  From the minute she hit the ground running in the Panthers, she began to try to figure out her own role, and what she should do, and what she could think, and what she should teach.  I think that’s a very important message for us because so often what people remember of the Sixties is big names, people whose faces are recognizable, people who are some sort of minor celebrities, and I think that is a very destructive tendency.  If we are ever to make social change in this country, the beginning point is to trust one another, to trust all of us who are not the people who are the architects of the wars that this country carries out but have a stake in the future.

This book, while it’s the writings and speeches of Safiya Bukhari, represents a much larger body of people, with whom she worked, with whom she fought, with whom she organized.  In fact, some of the writings in the book have other voices, especially the voices of people like Herman Bell and Nuh Washington and Jalil Muntaqim, all of whom are political prisoners.  Although Noah died in prison, Herman and Jalil are still inside.  It has contributions and comments and help by people like Pam Africa and Mumia Abu-Jamal and Angela Davis.  So, it represents a voice of a piece of history that is still in process.  We’re still figuring it out.

Safiya wasn’t writer.  She didn’t spend time writing these things.  These are essays, speeches, things that she wrote at 3 in the morning when she was done leading a long conference or march or some sort of demonstration.  They are interviews she gave when she was organizing support for political prisoners.  So, they have a passion to them, energy that flows, and you find out about the sorts of people represented by Safiya by reading from the beginning to the end.  These are not position papers although she takes positions in them.  She does analysis . . . on everything from Islamic revolutionaries to women in the Black Panther Party to the post-traumatic stress syndrome — something that no one talks about — which is a result of the government’s attacks on the Black Panther Party.   If you read this book, you would get a sense of a woman who fought all her life for the freedom of humanity and for the people.

The text below the video is an edited transcript of the video.  See, also, Safiya Bukhari, “An Untold Chapter in Black History” (Monthly Review, February 2010).