It could be worse, I say to myself, as I buy my Trailways ticket, he could be on death row.  He could be dying in a prison infirmary; he could be getting beaten up by racist gangs.  Instead, Herman Bell is doing 25 years to life at a prison outside New York City, where we can take the bus to visit him and make sure he’s OK.

It’s Herman’s birthday today and my girlfriend Laura and I are meeting our friends Tynan and Lise and their daughter Frankie, who have driven here from Montreal, to New York State’s Eastern Correctional Facility.

I suppose I should get the demographics out of the way: Tynan is female-to-male transsexual; Lise is his partner; Laura and I are lesbians, and Frankie, approaching the terrible age of two, remains undecided.  All of us are White and we’re going to visit our friend, who, like a disproportionate number of his fellow-prisoners, is Black.

The five of us enter the huge grey building, which manages to look both looming and funky, a satanic version of Harry Potter’s Hogwarts.1  We go through the usual inanities of emptying pockets and taking off jackets, shoes, earrings to get through the metal detector.  Frankie, who looks like she could be packing a rod,2 is also searched.  When the guards decide we are non-terrorists, they stamp our hands and unbolt the door to the visiting room.

Inside, there is the usual fluorescent-lit din: dozens of parents and friends and wives and girlfriends, sitting in plastic chairs at formica tables with men in dark-green prison suits, trying to make each moment count, as little kids yell and race each other to the vending machines.  We find a table, buy bad coffee, and in comes Herman, a tall, sweet-smiling, quiet man — coach of the prison’s football team — who leans down to hug us, one by one. Herman is 58 years old today.  He has spent the last 33 years in prison.

“GOOD!” scream headlines in New York City papers.  “Don’t Let This Killer Walk”; “Keep Bell On Ice.”3  In front of news cameras, Patrick Lynch, president of the Patrolmen’s Benevolent Association, declares, “These cold-blooded assassins and domestic terrorists should remain in jail for the rest of their lives.”4

A model prisoner, Herman has maybe one chance in 20 of getting out when he comes up for parole again next month.  The PBA wants to reduce that chance to nothing.

In 1973, when he was in the Black Panther Party, Herman was arrested and charged, with Panthers Anthony (Jalil) Bottom and Albert Nuh Washington, in the 1971 shooting deaths of two New York City police officers, Joseph Piagentini and Waverly Jones.  According to media accounts, Piagentini and Jones were responding to a domestic abuse complaint when they were killed on the streets of Harlem.

Diane Piagentini, Joseph’s widow, appears on TV with Lynch to urge that Herman be denied parole “from now until the end of time.”5  They flash an ugly mugshot of Herman in his Panther days, nostrils flared, eyes fierce in a “Get-Whitey” scowl.  A monster.

Here, at the Correctional Facility, this monster cuddles the squirming Frankie, then lets her down to play.  I watch Laura touch Herman’s arm and ask him how’s he’s doing.  Coming here is hard for Laura, who’s done over 14 years in prison herself on political charges.  “After your arrest, the cops spend time harassing you and knocking you around,” she told me once.  “Then they take your picture, looking all miserable and mean, to scare people.”

Herman and his codefendants argued in court they weren’t guilty: that the FBI, under J. Edgar Hoover’s COINTELPRO, which called the Panthers America’s number one threat,6 cooked the evidence.  The first trial ended in a hung jury; the second resulted in life sentences for the defendants and a book contract for the district attorney.7

“Understand — there was a war going on between police and the community,” says Laura, who spent years in the Weather Underground, supporting the Panthers.  I roll my eyes and wonder if there is ever not a “war” going on when tragic, needless deaths happen.  Yet, after Herman’s conviction, an ex-Panther witness came forth to say that his testimony against Herman was the result of police torture.

I cannot judge Diane Piagentini.  I don’t know if I’d be able to stop hating, in her place.  And yet, someone has.

Miraculously, someone has.  Waverly Jones, Jr., son of the other slain officer, has come to New York twice now, with some of his family, to ask the Parole Board to let Herman Bell out.  Jones, a baby when his father was killed, stated, “Nothing would give us more pleasure or joy than to see that man walk out of prison doors.”8

This is stunning, almost unprecedented.  But, given a national zeitgeist that allows the condemned, in the face of pleas from the likes of Desmond Tutu and the Pope, to be duly executed,9 it isn’t big news.  So we don’t talk about this with Herman; we barely talk about parole.

Here in the visiting room, we’ve started a little birthday party.  Pouring water into bottle caps, we toast one another with pinkies extended, and gossip.  Herman, with a plastic spoon, cuts an awful Reese’s peanut butter “cake,” and we sing Happy Birthday.

Herman wants to hear about Laura’s and my cat, Rhoda, whose mission is to shed orange fur globally.  Ty and Lise talk about working in the “Victory Garden” that Herman organized from prison, which used to distribute vegetables to inner cities.10  Herman chuckles at how bad the football team he’s coaching is, but he’s excited about his new granddaughter.  He remembers back when he was in Mississippi, a sharecropper’s kid, catching fish on the banks of a river after a rain.  He seems like a kid again when he says, “We just had so much fun,” though his face looks suddenly crinkly and puzzled at the other memories that arrive.

Frankie is now intently exploring her overalls with another two-year-old, and I wonder what’s been done to Herman here; how he gets through, as he’s called it, “one more day on the plantation.”  But surviving evil doesn’t make you a good person: Surviving evil and not passing it on does.  I’ve visited Herman for years and I would trust this good man with my life.  Herman has actually saved lives in here. . . .

But they’ve just announced visiting hours are over, and we gather up Frankie, who is not even a little tired.  We turn to go, and Herman admires the beat-up leather jacket I’ve pulled on.  I say, “Yeah, Laura got it for me, 16 bucks, streets of New York.”  Herman smiles, “Would you help me pick out one like that when I get out?”

What?  What did he say?  “When I get out”?  Did you forget how they hate you, Herman?  Am I supposed to say, be reasonable, go back to your cell now, go back to be strip-searched and monitored and controlled, but don’t worry, Herman, we’ll see you when we can, you know, there may be times when they won’t let us in, but we’ll keep trying to reach you through the vengeance and fear, we’ll all grow old together, and we’ll always hope.  Is that what I should tell you, my dear friend, my brother? 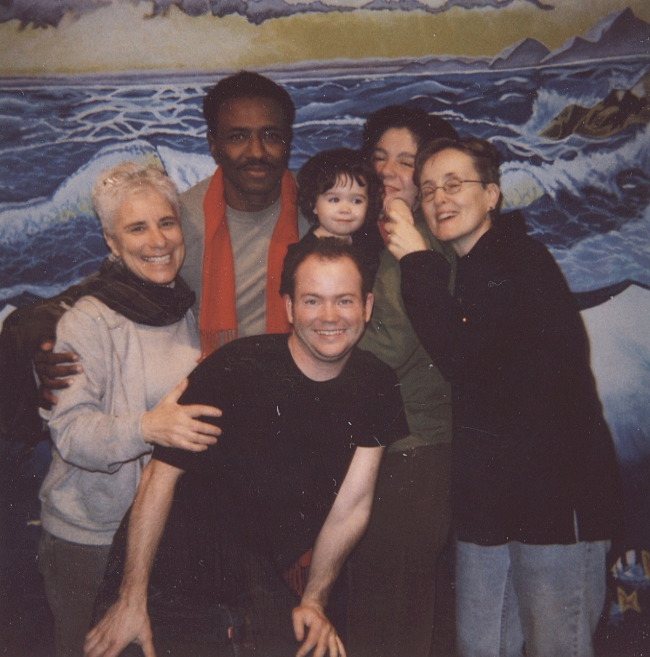 Consult “The New York Three,” which provides a brief profile of Herman Bell and makes available documents pertaining to police and FBI conduct in this case.

2  This is Frankie. Click on the image of “menace” for a larger view.

6  “[T]he greatest threat to the internal security of the country. . . . ” Final Report of the Select Committee to Study Governmental Operations with Respect to Intelligence Activities, United States Senate, 23 April 1976.

9   I was thinking here of Karla Faye Tucker, but, as you know, there are many more.