The name BP is now forever ingrained in people’s minds as the oil giant responsible for what has become the greatest environmental disaster in U.S. history.  But the mammoth oil spill resulting from the April 20 Deepwater Horizon oil rig explosion in the Gulf of Mexico wasn’t the first time British Petroleum has brought disaster to a country and its people.

The first disaster happened in the Persian Gulf.

The story begins in 1901, when a London-based financier named William Knox D’Arcy traveled to the country now called Iran, but known then by its European name, Persia.  D’Arcy was looking for riches, and Persia’s ruler, a corrupt fellow named Muzaffar al-Din Shah, was looking for a way to finance his extravagant lifestyle.  The two men struck a deal: for the grand sum of 20,000 British pounds (about $2.13 million in today’s dollars), plus half the shares in D’Arcy’s future company and 16 percent of its profits, the shah gave up the country’s oil rights in an area larger than Texas and California combined.

In 1908, the D’Arcy concession was reinvented with new investors as the Anglo-Persian Oil Company.

Shortly afterward, a young Winston Churchill, newly installed as First Lord of the Admiralty (head of the British navy), oversaw the transformation of Britain’s fighting fleet from one fueled by coal to a far more efficient — and powerful — navy fueled by oil.  Churchill, the grand imperialist architect who would oversee the post-World War II transformation of the old Ottoman Empire into a modern British-controlled Middle East, was one of the first to realize the immense potential of oil to greatly expand the already formidable British Empire.

The Anglo-Persian Oil Company extracted Persia’s oil, processed it at the world’s largest oil refinery, which the British controlled on the island of Abadan at the north end of the Persian Gulf, and shipped it home.  Not only was the oil a source of fabulous wealth for the British, it also played a key role in their becoming the world’s leading  naval and industrial power.

In 1921, the British got tired of the old shah and engineered a coup.  By 1926, a new leader had consolidated his position: Reza Shah, a nationalist, but one beholden to the British for his position.

Reza Shah set out to modernize his country, dropping the European name Persia for Iran, which means “land of the Aryans,” the original Iranians.  His brutal methods alienated the population and he gradually became less useful to the British.  Isolated from both his people and his benefactors, Reza abdicated his throne.  The next day, his oldest son, Mohammad Reza, a weak-willed and easily manipulated 21-year-old, was sworn in as the new Shah of Iran.

He would be its last.

Other forces had been gathering strength and coalescing around a remarkable figure named Dr. Mohammad Mossadegh, an attorney, politician, and a strong nationalist who believed Iranians should control Iranian resources.

At the time, that was a radical notion.  No Middle Eastern country had yet nationalized its oil industry.

With six other leaders, Mossadegh founded the National Front, giving him an organizational base with which to confront both the shah and the British.

Mossadegh kept pushing for more Iranian control of its oil.  He wanted the now renamed Anglo-Iranian Oil Company to open its books.  Iran was still supposed to get a set percentage of the company’s profits, but Mossadegh suspected his country was being cheated.

Mossadegh demanded Iranians be trained  for technical jobs in the oil industry so they could learn how to run the Abadan refinery.

Tensions built.  Mossadegh was elected head of the parliament’s oil committee.  Now he demanded that Iran receive half the profits of the oil enterprise — a concession the U.S. had already granted its oil “partner,” Saudi Arabia.

Again the British refused, and began sending warships into the waters off Abadan.

The oil committee recommended that Iran nationalize its oil industry, and the full parliament, called the Majlis, agreed.  The year was 1951, when Britain’s Labor Party government was carrying out its own program of nationalizing the United Kingdom’s coal, electric, rail, and steel industries.

But that was there.  This was Iran.

Iran had no tankers of its own and no technicians to run the refinery itself.  It looked like a standoff.

The British government, now led by Prime Minister Winston Churchill, considered landing troops and securing Abadan and Iran’s oil fields by force.  It launched a campaign to undermine Mossadegh by buying off Iranian media and taking steps to undermine the country’s economy.

Mossadegh stood firm.  When he got wind of a possible coup, he broke diplomatic relations and expelled all British diplomats.

For his heroic intransigence, Dr. Mossadegh was hailed as a hero by millions across the Middle East, as well as in Asia, Africa, and Latin America.  He had defied the British Empire and was still standing.

For the Empire, it was a bad example for other peoples seething under its rule.

London turned to the United States for help, but President Harry Truman thought the British were just being greedy and arrogant and refused to get involved.

Then there was an election in the United States, and former Supreme Allied Commander Gen. Dwight D. Eisenhower replaced Truman as president.

John Foster Dulles was put in charge of the State Department.  His brother Allen headed up the recently organized Central Intelligence Agency.  Both men were fierce anti-communist crusaders, as befit major stockholders of the United Fruit Company, which viciously exploited Latin American workers to build its own personal financial empire.

The Dulles boys convinced Eisenhower that Mossadegh was a dangerous radical who could easily turn his oil-rich country into a “satellite” of the Soviet Union.

Now this wasn’t about saving British oil, it was about “Saving the World from Communism” — and from threats to companies like United Fruit.

Eisenhower gave the go-ahead and the newly formed CIA pulled off its first coup, organized by the agency’s man in Tehran, Kermit Roosevelt, grandson of former President Teddy Roosevelt.

On Aug. 19, 1953, Dr. Mohammad Mossadegh was overthrown in a violent coup that took the lives of hundreds.  Order was restored, and the hated shah was reinstalled on his Peacock Throne. 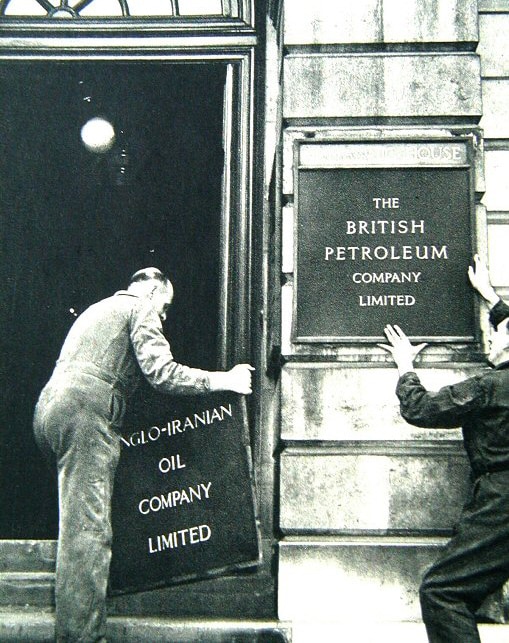 Meanwhile, the Anglo-Iranian Oil Company reorganized itself as British Petroleum, or BP.  The company hoped that shedding its old hated name would allow it to regain its formerly dominant position in Iran, but that was not to be.

The U.S had played the major role in the coup and wanted its share of the oil industry.  An international consortium was organized.  Five U.S. companies got 40 percent of the shares, the British got another 40 percent and the remaining 20 percent went to Royal Dutch/Shell and France’s Compagnie Française des Pétroles.

The people of Iran got the shah.

In 1979, the people got their revenge.  The shah was again overthrown, the country’s oil industry was again nationalized, and the Iranian Revolution earned the undying hostility of the U.S. and British governments.

British Petroleum, the U.S. oil giants, and their representatives in London and Washington were now more eager than ever to see another “regime change” in Iran.

Even if it means another war.

Phil Wilayto is an anti-war activist based in Richmond, Virginia and member of the Board of Directors of the Campaign Against Sanctions & Military Intervention in Iran (CASMII, at www.casmii.org).  This article is based on the chapter “Iran’s History with the West” from his book In Defense of Iran: Notes from a U.S. Peace Delegation’s Journey through the Islamic Republic (for more information about the book, go to www.DefendersFJE.org/dpi).

Phil Wilayto is a longtime activist in the labor, antiracist and antiwar movements. He is a co-founder of the Virginia Defenders for Freedom, Justice & Equality; editor of The Virginia Defender newspaper; coordinator of the anti-fascist Odessa Solidarity Campaign and co-founder of he Virginia Prison Jusice Network. He is the author of several books, including In Defense of Iran: Notes from a U.S. peace delegation's journey through the Islamic Republic, and The Feeding Trough, the first major investigation into the ultra-conservative Lynde and Harry Bradley Foundation. He can be reached at DefendersJFE@hotmail.com and @PhilWilayto1