For several centuries — between the 15th and the early 19th centuries — mercantilist theories dominated the attitude to trade in Europe.  This was the belief that an economy that had positive net exports (through exports being greater than imports) would be wealthier because it would lead to an inflow of bullion, or assets, and thereby increase its economic strength.  This approach led to economic policies designed to increase exports and suppress imports, trade wars, and even the colonial wars that were crucial to ensuring markets for the various European powers.

There were of course many flaws of mercantilist theories, most notably the confusion of bullion with real economic wealth, the lack of recognition of the various benefits of greater trade independent of the trade balance, and the failure to perceive that the purpose of increasing exports is to be able to import more, and thus raise the level and variety of consumption in the society.

For a relatively long time, mercantilist arguments have been discredited.  But recently, a new form of neo-mercantilism has emerged and has propelled the economic models of the two economies that are increasingly seen as the most successful and potentially powerful in the world: China and Germany.

Mercantilism — the obsession with net exports — is often seen as identical with export-led growth, but in fact the two are not the same.  It is possible to have exports as the basic engine or driver of growth without necessarily running a trade surplus.  All that is required is that export demand becomes a catalyst for growth in the rest of the system and generates additional demand.

Indeed, some of the classic examples of recent export-led growth, such as the East Asian “dragons” or the Southeast Asian economies, generally ran trade deficits during their period of high export-led growth.  Even China’s trade surpluses are of relatively recent vintage, since the country had trade deficits during the period of rapid export growth from the early 1980s to the late 1990s, and only started having large trade surplus in the early part of the 2000s.

However, for the last decade in particular, both China and Germany have been increasingly reliant on a strategy of growth that requires pushing out more and more net exports.  This in turn has required suppressing domestic wages and consumption.  In China the consumption-to-GDP ratio fell from 46 per cent of GDP in 2000 to less than 36 per cent in 2007, while in Germany it fell from 60 per cent to 56.5 per cent in the same period.

Why would such a strategy be attractive at all?  After all, no one really still believes that an inflow of bullion (or a net accumulation of financial assets, which amounts to the same thing) is of great intrinsic value for an economy.  It could be argued that the current strategy is based on a different notion of the gain: one which recognizes the absence of full employment and seeks to use trade as a means of maximizing employment.  Thus net exports are valued because they involve more productive jobs at home and less leakage of jobs through imports.  To that extent, this is also a form of beggar-thy-neighbour economic strategy, since it involves creating or preserving jobs in your own country at the expense of jobs in your trade partners.

This argument too is essentially fallacious, because it does not recognise that while trade can affect the pattern of employment, the aggregate level of employment is determined by macroeconomic policies.  The possibility of employment in non-tradable activities making up for employment losses through trade (which would have to be the result of active government intervention as well) is not considered.

Despite this, the urge to generate trade surpluses has become an important plank of the overall economic strategy in both countries.  It is possibly even more marked in Germany than in China, which has seen some recent moves to develop the home market.

Even more than export-led growth per se, such a strategy involves a fallacy of composition, in that all countries cannot pursue it.  Indeed, the dependence of the surplus economies on the existence of other countries that are simultaneously running deficits is only too obvious.  In the recent past, that has come from a combination of one large global player (the US economy, which has served as the engine of growth for much of the rest of the world) and a number of smaller economies running smaller deficits financed by capital flows.

This gives rise to a classic dilemma of mercantilist strategy, which is evident in an exaggerated form today for the neo-mercantilist economies: they are forced to finance the deficits of those countries that would buy their products, through capital flows that sustain the demand for their own exports.  Thus it is no accident that China and Germany are both large investors in the US and purchasers of US Treasury Bills, or that German banks are heavily implicated in lending to the now-fragile deficit economies in the European Union.

Despite these contradictions and dilemmas, such a strategy can certainly be successful for a while, and this can be true even over the economic cycle.  This is evident from Chart 1, which shows how both China and Germany experienced very sharp declines in export growth in the wake of the recent global crisis, but have since rebounded sharply.  (It should be noted that all charts refer to merchandise trade only.) 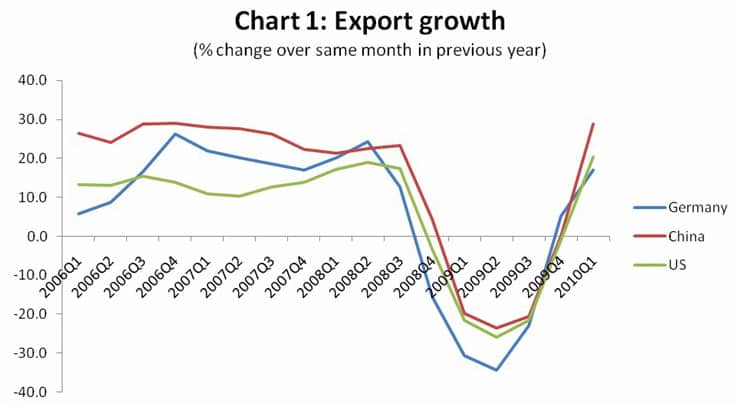 Interestingly, Chart 1 also shows how the United States economy had been showing reasonably high export growth before the crisis and how its export growth has also revived (largely related to dollar devaluation) in the most recent period. 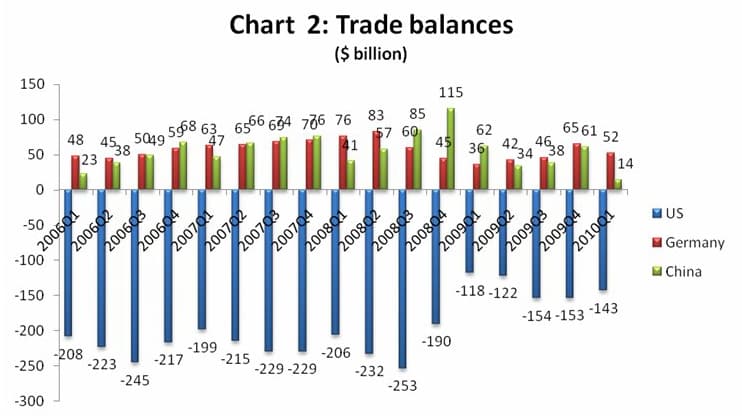 Nevertheless, both countries have maintained the tendency to generating trade surpluses, although there has been some shift within China.  In Germany, the ability to impose wage restraint throughout the period of economic boom and rising labour productivity were remarkable in their scope and critical to the enhanced competitiveness of the economy.  During the crisis, employment levels fell relatively little, not only because of the existence of automatic stabilisers that provided a countercyclical cushion for the economy, but also the willingness of German workers in export industries to accept effective wage cuts rather than lose employment.

In any case in Germany, a significant part of the export surplus is generated from trade with other partners in the European Union (EU).  Intra-EU trade accounts for around two-thirds of total EU trade and an equivalent part of German trade as well.  Chart 3 shows how movements in Germany’s trade surplus have been closely mirrored by movements in the aggregate deficit of all other EU countries. 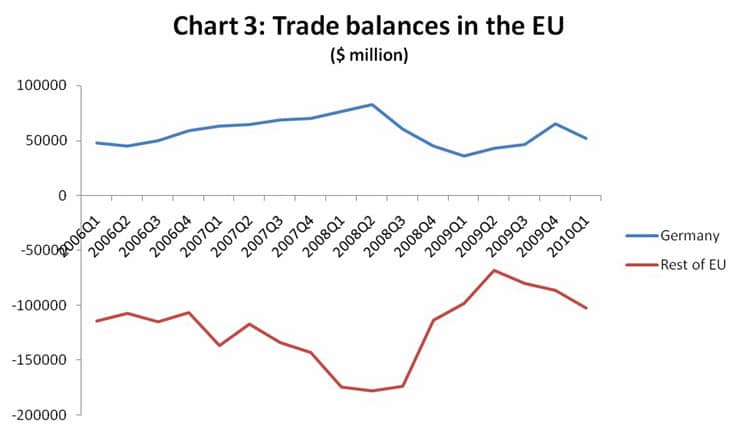 It is this misalignment within Europe that is at the heart of the economic problems faced by many deficit countries in the region today.  There is a basic difference between price levels in Germany and most other EU members, resulting from the fact that Germany has been able to keep wages nearly stagnant even with rapid labour productivity increases, while other countries are not able to let the gap between wages and productivity widen to that extent.  This means that prices of many goods and services are significantly lower (sometimes by as much as one-third) in Germany compared to most other European economies.

Remarkably, therefore, there are real exchange rate mismatches within a common currency area.  Obviously this reflects another significant failure, that of the European Single Market to ensure price arbitrage of traded goods, or wage equalisation through the movement of labour.

What is more significant for present purposes is that such mismatches cannot continue indefinitely.  Already the deficit countries in Europe — not only those whose governments’ bond markets are in difficulties but others as well — are being forced to cut down on imports through very severe austerity measures that are reducing both output and employment.  Ironically, such moves are being strongly pushed by the German government inside the EU, even though this is likely to rebound adversely on the German capacity to generate export surpluses.

In the US, the external adjustment will also clearly occur, whether through exchange rate movements or increased protectionism or in any other manner.  Chart 4 suggests that this process is already underway: although import levels of both the US and non-Germany EU have recovered slightly from the trough of early 2009, they are still far below the earlier peaks and also appear to be levelling off despite the recent output recovery. 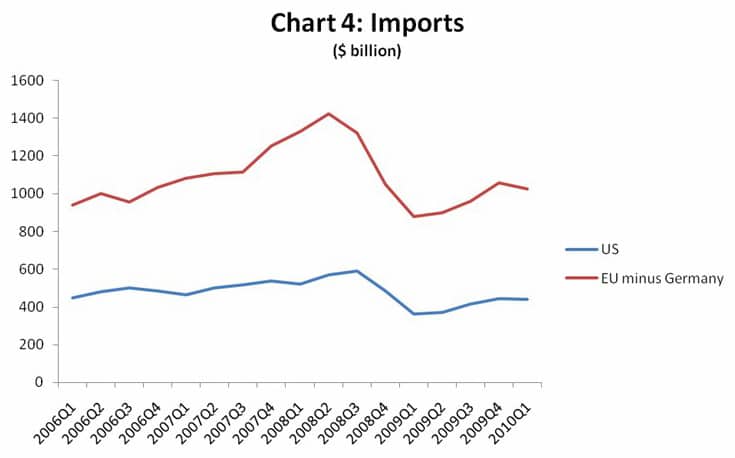 So, while the neo-mercantilist strategy can be apparently successful for a while, it is likely to come up against both internal and external constraints.  Internally, the suppression of wage incomes and domestic consumption will meet with political resistance.  Externally, deficit countries will either choose or be forced to reduce their deficits through various means.  In either case, the pressures to find more sustainable sources of economic growth, particularly through domestic demand and wage-led alternatives, are likely to increase.