Today the Census Bureau released a report on trends in income, including median income, income inequality and income poverty, and health insurance coverage between 2008 and 2009.  As expected given the increase in unemployment — which grew from 7.4 percent in December 2008 to 10 percent in December 2009 — the report shows a substantial deterioration in Americans’ economic security between 2008 and 2009.

The Census figures show that in 2009 one out of every three Americans had incomes that fell below the amount (roughly $45,000 for a family of four) that most Americans and various budget estimates show is needed to “make ends meet” at a basic level.  Also, of particular note, the report shows substantial increases in the poverty rate and the rate of people without health insurance, as well as declines in median income for various demographic groups.

In 2009, some 43.6 million people had incomes below the federal poverty line.  The income-poverty rate increased both overall — from 13.2 percent in 2008 to 14.3 percent in 2009 — and for all racial and ethnic groups, except Asians (for whom the increase was not statistically significant).  The number of persons living below the poverty line has now increased for three consecutive years.  The largest percentage increases in poverty were experienced by families headed by a single man (3.1 percent) and children under age 6 (2.6 percent). 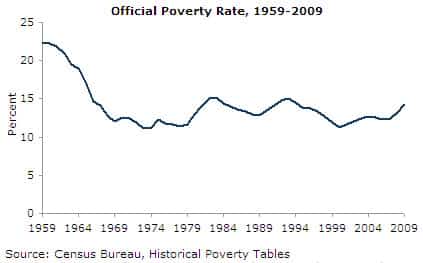 There is broad recognition that the current poverty line ($21,756 for a family of four in 2009) falls far below the amount of income needed to “make ends meet” at a basic level.1  When established in the early 1960s, the poverty line was equal to nearly 50 percent of median income.  Because it has only been adjusted for inflation since then, and not for increases in mainstream living standards, the poverty line has fallen to just under 30 percent of median income.  As a result, to be counted as officially “poor,” you have to be much poorer today, compared to a typical family, than you would have in the 1960s.

Both public opinion research conducted by Gallup and other pollsters, and basic budget analyses conducted by the Department of Commerce and various non-governmental research organizations, suggest that the minimum amount needed to “make ends meet” at a basic level is around $45,000 to $50,000 for a family of four.  While the Census report does not report data for such a standard, it does provide data on the number of people with incomes below 200 percent of the federal poverty line, which is a roughly equivalent income level.  These figures show that one out of every three Americans in 2009 had income below 200 percent of the poverty line, and that the percentage of such people increased by 1.1 percentage points between 2008 and 2009, and by nearly 4 percentage points since its lowest recorded level (29.3 percent) in 2000.2

Young adults and adults in their 30s and early 40s were particularly hard hit.  For example, householders age 24 and younger saw their median incomes drop by 4.4 percent, a decline second only to that of non-citizens (4.5 percent).  Young adults age 25 to 34 — who already had among the highest uninsurance rates, with more than one in four uninsured in 2008 — experienced the largest increase in the share of people without health insurance (2.6 percent).

After a record decline between 2007 and 2008, overall median income apparently stabilized in 2009 (the decline from $50,112 in 2008 to $49,777 in 2009 was not statistically significant).  However, there were considerable differences in the median income of various demographic groups.  In general, non-Hispanic whites, Blacks, young adults, married couples, and people living in the suburbs experienced declines in median income.  The largest declines were experienced by Blacks (4.4 percent); householders under the age of 24 (4.4 percent); and non-citizens (4.5 percent).  The elderly were the only group to experience an income gain of a similar magnitude (5.8 percent).  This increase reflects in part the roughly $13 billion in supplemental Social Security payments that last year’s Recovery Act provided to seniors.

Impact of Social Insurance, Recovery Act and Other Policies

It’s important to note that these numbers largely do not reflect legislation enacted in 2009 and 2010 to boost job growth and increase economic security.  While the Recovery Act was signed into law in the first quarter of 2009, most of the financial assistance provided by it to low- and moderate-income households comes in forms (including tax credits and in-kind assistance) that are not factored into the official poverty and median income numbers.  In addition, many of the investments in the Recovery Act were not made until the latter half of 2009 and this year.  The impact of these investments will only show up in the figures for 2010 (released this time next year) and in subsequent years.

Finally, health care reform, which will, among other things, ultimately extend public health insurance to nearly all currently uninsured Americans with incomes below 125 percent of the poverty line, and provide subsidies for insurance up to 400 percent of the poverty line, has only begun to be implemented.  Most of the expansions in coverage will not occur until 2014.  Many uninsured young adults, however, will benefit next year from a health care reform provision that allows them to stay on their parents’ insurance policies until age 26.

1  For more on this point, see Fremstad, Shawn. 2010.  “A Modern Framework for Measuring Poverty and Basic Economic Security.”  Washington, DC: Center for Economic and Policy Research.

Shawn Fremstad is the Director of the Inclusive and Sustainable Economy Initiative at the Center for Economic and Policy Research and an expert on issues of poverty and inequality.  This article was first published by CEPR on 16 September 2010 under a Creative Commons license.